And The Space Emperor!

As you may recall, yesterday… yes, folks, I am actually writing “tomorrow” what I said I would… (EDIT: As you can tell, it didn’t get finished until a few days later) as opposed to a week or a month later… we discussed Captain Future, The Wizard Of Science, and his partners — Grag the indestructible robot! Otho, the incredible android! And the Brain, bodiless super-genius! And, frankly, if reading those prior sentences doesn’t  spur some kind of thrill in you, get ye gone from my blogge, for ye are no true-borne gamyr!

Anyway. Today, we shall look at the first Captain Future novel, “Captain Future And The Space Emperor!” It opens with the revelation that Earthmen are being transformed into ravenous, prehistoric, creatures, by some sort of “atavism plague” that rapidly degenerates them back to their ancestral form, and somewhere, a biologist is crying. No matter! Ignore the sobbing scientist! Let’s be fair, the idea was at least vaguely new and sort of plausible (and by ‘plausible’, I mean, ‘a lot fewer lay people knew enough about science to know what bullshit it was, but no real biologist of the time would buy it’) back in 1940; when Star Trek did it more than 50 years later, it was utterly unforgivable.

In any event, when disaster strikes the System, the call goes out for Captain Future! And Captain Future answer the call, in his mighty spaceship, the Comet! Please note the lack of cadillac fins. This was due, in part, to the ability of the The Comet to disguise itself as a comet, by producing a blazing particle aura around it, thus avoiding all suspicion, for when the evil villains would peer out of their space windows, they would see nothing but a mere comet, which was not moving in accordance with any Newtonian trajectory, was not on any charts, and whose blazing tail was evident even if it was very far from the sun, which is what causes comets to have tails in the first place! 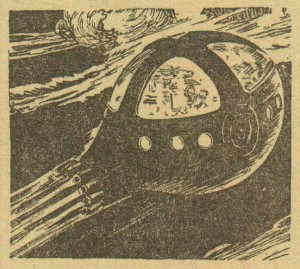 And so, Captain Future sets off! The plague has begun on Jupiter, and is due to someone calling himself “The Space Emperor”. Jupiter is a world “whose vast jungles and great oceans were largely unexplored”.

An aside. In this novel, Captain Future mentions prior adventures, such as capturing the “Lords Of Power”. Yet, this is the first novel in the series, and the character did not appear in prior stories. He begins as an established hero; no “origin story” required, except a quick background. Compare to modern heroic media, where it’s vital to spend endless hours detailing everything the hero has done and then having almost no story left to tell. The monomyth is, ironically enough, killing modern mythmaking.

Oh, the Great Red Spot on Jupiter? That’s actually the Fire Sea, a great radioactive volcanic cauldron. Also, only the upper layers of Jupiter’s atmosphere are methane and ammonia; beneath the clouds, it is a mostly Earthlike world of continents and oceans, inhabited by Jovians, green, hairless, flippered beings. Oh, the Jovians, previously peaceful, are being stirred up against the humans who have settled on Jupiter by the aforementioned Space Emperor.

Before landing on Jupiter, though, Captain Future is ambushed in space! He forces the attacking ship down on Callisto (which, of course, has a breathable atmosphere.. I think the only object of any note to not have a breathable atmosphere is Earth’s moon). Callisto is inhabited by crystalline life forms that can attack end envelop their prey. Using them as a threat, Captain Future wheedles confessions from the vile miscreants, and they describe the Space Emperor as an armor-suited figure who “does things no human could do!”

Further, only a few people could have known Captain Future was heading to Jupiter. This sets up a plot that is repeated in the other two novels I have read — early on, Captain Future realizes the mysterious villain of the novel is one of a set of people, and spends most of the rest of the story narrowing the list of suspects. Also, in each of the three novels, the villain is somehow using, manipulating, or controlling a native race for his own ends. What saves these stories from tedium is that beneath the repetitive plot structure (which I have to assume is varied eventually, given how many Captain Future novels there were!), there is endless invention and awesome spectacle — like the Crawling Crystals Of Callisto! (They’re not called that in the book, just to be clear… but isn’t that a cool name? Wouldn’t you buy a novel called “The Crawling Crystals Of Callisto!”? I would.)

Otho disguises himself as one of the capture henchmen. He can soften and mold his plastic flesh almost without limit, which is useful.  This allows him to find out when and where the Space Emperor will be contacting his Jovian allies, but when Captain Future goes to capture him, he discovers that the Space Emperor is immaterial! He cannot be attacked, captured, or harmed! (Here, interestingly, follows some conversations that show more attention to science… or at least verisimilitude… than is seen in other media, for example, Star Trek: The Next Generation. Having concluded that the Space Emperor is vibrating at a frequency higher than that of ordinary matter, the issues of this — such as how does he breathe, and why the planet’s gravity doesn’t suck him into the core — are brought up and addressed, or at least listed as mysteries which must be solved, and which eventually are.)

While on Jupiter, we also meet two recurring characters: Ezra Gurney, the crusty old Marshall of the Planet Police, and Joan Randall, Planet Police Secret Agent and theoretical love interest. I say “theoretical” because, while she is female, and only such in the novels I’ve read thus far, and is positioned, trope-wise, to be Captain Future’s girlfriend, or at least Unstated Sexual Tension Friend (as is often the case in serial fiction), as of the three and a half novels I’ve read, Captain Future has less sex drive than a toaster, and while he is filled with Manly Fury when Joan is captured (on average, 14.6 times per novel), he has just as much Manly Fury when it happens to Grag, Otho, or the Brain. Joan’s own emotional state is limited to an occasional wide-eyed stare at the handsome Captain Future. I have to wonder if, back in the early 1940s, there was an underground of fanfic that tapped out hard-core porn on manual typewriters, and if the early fans of “scientifiction” were sexually aware enough to even contemplate what a shape-shifting android like Otho or an unstoppable powerhouse like Grag could do in the sack. Not really sure what you’d do with the Brain. Don’t want to think about it. PS: If you do a GIS on Captain Future with safe surf off, you WILL find porn — this is the internet, after all — but it’s based on the 1970s anime series, as are most of the images.

There is quite a bit going on, a lot of last-minute escapes, derring do, cunning plans, and some really awful “friendly banter” between Grag and Otho. Really, it may be simply the cultural distance… we live in a somewhat more restrained era… but a lot of what’s supposed to be playful interaction between friends, among all the Futuremen, often comes across of my modern ears as unduly harsh. It may also be that Edmond Hamilton’s skill at dialogue, at least in these early novels, is far less than his skill at imagining wondrous worlds and settings. At that, at least, he excels — especially when you remember most of this hadn’t been done before. He is quite good at evoking the feeling of a world with a handful of sentences, using a relatively sparse number of words to create a rugged Jupiter mining town or the eerie surface of Callisto. The raw energy and excitement of the story allows Captain Future to leap over great gaping holes in characterization.

Ultimately, we learn the Space Emperor is posing as “The Last Ancient”, a member of the near-mythical race of “super-civilized” beings who inhabited Jupiter long ago. Of course, he is a fraud, an Earthman who found some of the Ancient’s advanced technology, and he has duped the Jovians into following his scheme.  Captain Future defeats him, naturally, by outwitting him. (This is another common theme — Captain Future uses science against his foes. The ethos of the Captain Future novels is clear: Science is not evil, humans are. Even the atavism plague the Space Emperor is using had a benign origin — it was intended to let the Ancients study the evolution of species for the sake of pure knowledge. There is nothing, at least thus far, in the Captain Future novels that is of the “Things man was not meant to know” category — just things which should be kept out of the hands of the evil and the unscrupulous.)

From a gaming perspective, the universe of Captain Future is amazingly rich. Obviously, GURPS Tales Of The Solar Patrol, with the background suitably altered, is a great starting point, but any system that supports pulpy sci-fi action is good. The System is a great setting because of its size and population. Virtually every world is inhabited or inhabitable,  and even the long-settled worlds are home to countless mysteries, lost cities, forgotten races, and strange artifacts. Most of the worlds have a frontier feel to them — you can draw off the gold rush, of course, but also the settlement of the American West (complete with angry natives) , Australia during its penal colony days, or the English colonies in Hong Kong and India. The novels either ignore issues of imperialism and exploitation, or portray native dissent against the interlopers from Earth as something exploited by evil humans for their own gain, but there’s no reason to keep it that way, especially if the players will be unable to accept the status quo. (It ought to be noted that, in other novels, it’s made clear many of the aliens have equal status to humans — we meet Martian and Jovian businessmen, for example, who have considerable wealth and power in the System, so that there’s evidently some degree of equality going on. Except, of course, for women. It may seem fairly progressive to have Joan Randall be a Planet Police Special Agent instead of a nurse or a secretary, but, as of halfway through the fourth book, you’re left wondering how she ever got the job, as she seems to have no function except to be kidnapped or to stand there while Captain Future delivers some exposition.)

Despite the advanced weapons, combat is often quite physical, and one of the most common tropes is attacks by strange alien beasts who are conveniently immune to conventional super-weapons. Most characters in a Captain Future game would do well to know some fisticuffs and knifeplay. At the same time, actually advancing the plot requires deductions, fact-finding, and especially SCIENCE! Intellectual skills should be a big part of the game, but characters will tend to be ludicrously skilled generalists rather than realistic specialists.