Shopkeepers, Slavers, And Courtesans, Oh My!

(Well, Bugger It If I Have. You Ought To Know By Now I’ll Beat A Joke To Death, Reincarnate It, And Beat It Some More.)

(Yeah, But That’s Not A Joke, Even By Your Admittedly Overbroad Standards. At Best, It’s An Allusion.)

(So? My Favorite Character Was a Gnome Allusionist! See, That’s A Joke.)

(No, He Was Average Size For A Gnome)

We (That’s the royal ‘we’, but I’m ‘murrican, and we don’t have no kings (‘ceptin’ Elvis and Kirby, so I guess it’s the Elected We) continue our walk through the classic Arduin trilogy of gaming supplements. More classes this time. Possibly something else, but it’s unlikely I’ll get that far. We’ll see. Hell, it’s possible I won’t even get through the classes.

But First, A Correction

I’d made a comment that there were no attribute-based bonuses to thief/martial artist skills, leaving the percentages exceptionally low. Well, I was wrong, for on the very next page, there’s a list of such modifiers. You get a +5% per each point OVER FOURTEEN (14) of the attributes in question, which is pretty straightforward for the era, and, also typical of the era, many use averages instead of a single attribute. For example, your bonus to Lie is Charisma and Intelligence… sorry, CHARISMA and INTELLIGENCE… “combined, then averaged”. Honestly, I sort of prefer this approach… or even a ‘variable attribute based on task’ approach… to the 3.x/Pathfinder system where attributes and skills are linked even for uses where there’s not always a perfect fit. On the other hand, I know people who really hate that kind of fussing over fine details of whether a particular task is more based on Intelligence or Dexterity. (The rules in Arduin continue to reference Agility, as well as Dexterity, so it seems it was a standard house rule in Dave’s games, one he assumed everyone played with.)

Also, Luck items add a flat +20% per plus, which, when you consider many of the odds start at 5% and go up by very small amounts per level, makes them extremely good to have.

One of the oldest debates in RPGs is the issue of whether normal people have levels. What, exactly, can a fifth level Candlemaker do that a fourth level one can’t? (Well, according to my homebrew rules, produce 0.45 more candles per hour, on average.) Dave included an XP chart for “Normals” in the Arduin Grimoire, but offered no guidelines on what that meant. He corrects that oversight in Welcome To Skull Tower. Sort of.

Do You Get Bonus XP If The Boots Are High, Hard?

It’s good to know the real problem was the lack of an XP chart, and now that we’ve got that, everything else is easy.

Outlaws represent all manner of bandits, brigands, highwaymen, bikers, and so on. Like the martial artist, they’re intended to be used as a template to construct a particular type… also like the martial artist, the actual rules for differentiating types mechanically are pretty much non-existent, except for weapon choices. It’s interesting to note that it was understood, at the time, that a highly-customizable generic class was superior to a dozen or more specific classes that differed from each other only by a little, but no one had quite worked out how to do one, short of abandoning classes altogether, as Runequest (and others of the era) did.

You Get A +20% To Swimming Ability… Which Doesn’t Exist.

As always, a few quick notes on the table:

Slavers (Not The Kind With Stasis Boxes)

(Though In Arduin, Anything Is Possible…)

Discussing This Class On RPG.Net Will Probably Get You Banned

Following the logic of the era, every profession (except ‘Normals’) gets their own class table. Let’s just take the usual disclaimers as to the immorality of the topic as given.

Slaver have a “cruelty factor” of “never less than 75%”, which means… erm… I dunno. The alignment chart in The Arduin Grimoire has “Cruelty Factor” along with Lie, Tolerance, and others, but it’s not remotely clear what to do with them. Does the DM roll them to determine if an NPC will or will not engage in some action? Do you roll both the “Kill Factor” and the “Cruelty Factor” to determine a)if the NPC will kill you, and b)if they’ll do it painfully?

Hobbits are only occasionally slavers, but, when they are, they’re among the cruelest. I do not find this surprising. Never trusted them furry footed little bastards.

Slavers fight “one column back” on the attack chart unless using nets or whips (well, duh) in which case, they get +2 and +4. When you consider that getting +1 with a single weapon type was considered a huge deal for outlaws, it’s clear there was little idea of ‘balance’ going on; Dave just wrote down whatever seemed cool, and the Arduin books are composed of rules and ideas from a span of several years, presented one after another without any evident editing of older items to bring them in-line with the newer stuff. It’s part of what makes them so awesome — they preserve the raw, original, thought processes of one of gaming most prolific and inventive creators, not the refined and “ready for press” results that have passed through several editors and co-authors. (A somewhat self-interested bit of praise, as these articles are dashed out in one pass without any real editing, either. I’m not lazy and sloppy… I’m sharing with you the raw purity of my creative instinct!)

Maybe if I win the lottery, I’ll buy the rights to Arduin and redo all of it in a massive tome under the OGL for 3.x/PF.

Of course, they gained abilities on a level-by-level basis…

At Sixth Level, Can Control Minds Completely, Building A Great Empire Before the Tnuctipun Rebel

Secretary : I’ve had enough of this. I am not a courtesan. (moves round to front of the desk, sits on it and crosses her legs provocatively)
Biggles : Oh, oh, ‘courtesan’, oh aren’t we grand. Harlot’s not good enough for us eh? Paramour, concubine, fille de joie. That’s what we are not. Well listen to me my fine fellow, you are a bit of tail, that’s what you are.
Secretary : I am not, you demented fictional character.

Wow, way too much spacing there. I’ve got to learn CSS so I can format these articles how I wish.

Not Likely To Go On A Run… Eh? Eh? Know What I Mean, Wink Wink, Nudge Nudge?

Having a ‘seductive/manipulative’ character class, even one with obvious sexual overtones, is hardly ridiculous in the context of fantasy or sci-fi… ask Inara Serra! What is now known in D&D circles as the ‘diplomancer’1 might have begun here…

However, the statement that they are most likely to be played when the group stops at a tavern for the night kind of undermines that. They also ‘attack two columns back’ on the combat table, meaning, they’re about as good in a fight as a magic-user… with no spells. (I must also wonder about the whole ‘played by being at roadside inns’ thing in actual play… what happens? The party gets to a tavern, and the guy playing Throngor The Bloodspiller goes, “Yay, I can play Thonga the Bodacious now!” while the other players, being sensitive, enlightened, open-minded 14 year olds in the 1970s, support his exploration of gender identity?

Naturally, Courtesans have level-based abilities, mostly centering around being able to make progressively stronger love potions. At 100th level, they get the powers of a first level psychic. To call that “unimpressive” is to praise with faint damns.

They also make truth potions which can kill you irrevocably if you are of a lower level than the potion. That’s pretty cool.

Here’s a chaeronyx, which is a medusa centaur, which will get to when we get to monsters. What it’s doing in the Courtesan section, I’ll never know. 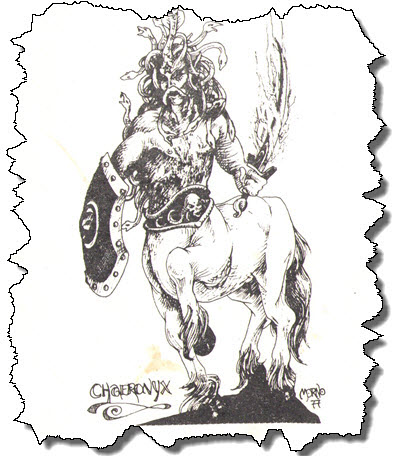 In the interests of fairness, and because I know someone will call me on it if I don’t mention it, there is a bunch of stuff about how Courtesans are not common streetwalkers, they’ve got a guild, they’re spies and masters of secrets who earn XP selling knowledge (and, erm, and I quote “using the womanly arts”), etc., but it’s undermined by the assumption they won’t go adventuring and are to be played “part time” when the party stops for the night. (Hell, at least give them Lie and Con as per a thief of their level, or something.) A classic case (which continues straight up into modern times) of a class design that doesn’t “do what it says on the tin”, whose mechanical abilities do not match their flavor text.

Coming up next… a lot of charts. A whole lot of charts. How many I can cover in each installment, I dunno, but they’re one of my favorite parts of the book, because there’s so much implied by the existence of some of them… such as the fact octorillas exist on the “Condensed Character Limitations Chart” and that 88 mm shells appear on the “Large Weapons Gunnery Chart”.

1: For anyone reading this who’s not a regular D&D player… yeah, like anyone’s reading this… this isn’t a formal class in any way. The ‘diplomancer’ is someone, often a bard or cleric (classes which tend to have high Charisma), who has maxed out their social skills and taken feats and selected magic items which kick their bonuses even higher, allowing them to use skills like Diplomacy and Bluff so well they border on magical charm spells in their effectiveness.