When The Saints Come Marching In

OK, another short one this time (“That what’s she” nah, never mind, done that bit too many times, even for me), as I spent yesterday house-hunting, which is sort of the reverse of normal hunting, in that, if you find your prey, it devours you… or at least, all of your money. If a thousand ducks line up in a row, first, they can be lightning bolted, and second, I might end up cutting an hour commute to 10 minutes, which would let me post more than once a week. But finding a house that meets our specific needs is problematic… we have health and pet issues that complicate matters, and it’s not worth the amazing stress and expense of moving unless it really cuts down my commute, which means, finding a place within 10-15 minutes of where I now work, which is right at the corner of “The Ass End Of Nowhere” and “Outer Mongolia”.

(Until The Rest Of The Party Kills Them)

While technically a subclass of cleric, with full clerical abilities, it seems to me that saints are more properly considered true anti-paladins… in terms of Actual Play. In Actual Play, the paladin screams “Die, heretic!” at anything that moves (or doesn’t, in the case of ropers and mimics) and proceeds to massacre madly in the name of whatever deity of love, peace, and justice they profess to worship. Saints don’t do that. Saints are forbidden to engage in combat.

Or are they? It’s a tiny bit confusing. They “NEVER use arms or armor” and “will never fight, no matter the provocation”, but will “try their utmost to send all undead to their ‘proper rest'” and “banish all lesser and greater demons back to their respective hells”. So it’s unclear, to me, if this means they can attack undead and demons, or if they seek to accomplish their destruction by non-attacking means… which might mean using spells, not weapons, or it might mean buffing/healing the fighting-men and magic-users to have them do the job. The interpretation is up to the GM running the game. In a perfect world, this would be settled when someone decides to play a saint… in the real world, I suspect, it was settled in a long debate between the saint’s player and the GM the first time the party encountered a skeleton, while the other players sat around being bored, this being well before smartphones, laptops, and gameboys. Maybe they had those little hand-held “football” games where you had one red LED and you had to maneuver it past three other little red LEDs. Yes, kids, at one point, our handheld video games had 1-bit graphics. You and your fancy 8-bit games! Coddled wimps! You think you’re ‘old school’? You don’t know old school!

This Was Cutting-Edge Technology At The Time, Kiddies

Where was I? Oh yes. Saints.

Saints weren’t just “Clerics who hid far away from melee combat”, though. (Quick note for those of who mostly familiar with MMO tropes. In most MMOs, clerics wear light armor and have no melee skills. In D&D and related, clerics are the second-best melee combatants in the game, and are expected to be on the front lines. Interestingly, the saint class foreshadows the MMO cleric rather well…) They had a variety of special abilities. 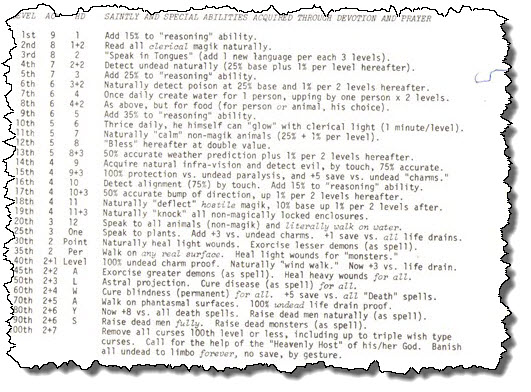 Detect Alignment By Groping… Doesn’t The TSA Do That?

You might note the “HD” column is a bit… odd. The X+Y notation was used only in the earliest edition of D&D, the original three little brown books. It was obsoleted by Greyhawk, which came out well prior to the publication of the first Arduin book. No other Arduin class, that I can recall, uses it. So it seems very likely that the Saint was one of the earliest classes that Dave Hargrave designed… and even though Skull Tower was the second book, published in 1978, it seems he copied the rules verbatim from his original notes without updating to the rapidly-evolving standards of the time.

“Reasoning” is the ability to convince monsters not to fight, and, if it succeeds, there will be “absolutely no fighting by either side”. At first level, you add 15% to this ability… but there’s no calculation for the base you’re adding to. Perhaps it’s 0%, so it starts at 15%? It’s also up in the air if a fight can be restarted, or not… if the PCs help themselves to the monster’s loot, does this break the “reasoning”? What happens when the players don’t want to stop fighting, but the Saint uses his ability anyway? Can they attack him? Or can he “reason” them out of it? Damn, so many great fights must have started over this class…

Because Rhialto, John Carter, and Conan Should Have Totally Hung Out With Bruce Lee

I often say “D&D is a genre, not a game system”, and few things prove this more than the introduction of monks to the game system. As a high schooler, I was painfully unaware of the martial arts genre… for whatever reason, it never entered my cultural awareness… and so I spent a good bit of time pondering why Friar Tuck was booting people in the head. Anyway, it’s obvious that the fannish communities that embraced D&D overlapped heavily with the fannish communities that loved chop-socky films (Wuxia? What’s that? Is that like Japanimation?), and so, it got added to the mix of Arthurian legend, Tolkien, Vance, and whatever else was trendy at the time. (If there had been more cross-Atlantic fan contact, early D&D would surely have been overrun with Daleks, but there wasn’t, so, it wasn’t.) Remember, folks: All culture is appropriation, and don’t let anyone tell you otherwise.

According to Dave Hargrave, the problem is that martial artists have “too much power and not enough compensating factors”. (Lizard reads that, raising an eyebrow in a Spockish fashion. Lizard flips back to the stats for the ibathene. Lizard flips back to Welcome To Skull Tower, reads that again. Lizard shakes his head theatrically, and moves on…) Anyway, Dave presents his own version of the “Martial Artist”, which he notes is intended to represent a variety of different types, such as ninjas, shao-lin priests, and so forth. On the one hand, it’s very cool that it’s acknowledged there were many actual fighting traditions and fictionalized archetypes based on them. On the other hand, other than a note that the weapon fighting bonus applied to “the weapons that each specific type of Martial Artist would be prone to use”, there’s no mechanical distinctions present. (The player is tasked with doing the research to better define their preferred Martial Artist.) 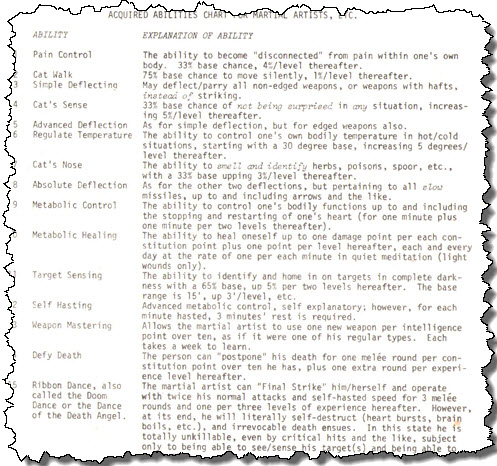 If You’re Surprised, There’s A 33% Chance You’re Not Surprised.

Most of these are pretty self-explanatory, and follow a typical pattern: Each has its own mechanic for determining chance of success. The lack of any basic system for, say, detecting poisons or setting the difficulty of a surprise roll shows clearly here. A few notes:

So, we come to the end of a short segment. Next time… more classes!