Last week, as you recall, we discussed true strength, true charisma, and the sadly inevitable (for the era) Female Attribute Chart. Oh, and for those of you joining us1 here for the first time, this is part… I’ve lost count… of my long, ongoing walkthrough of the classic Arduin Trilogy. This week, we’re discussing, morale, scars, probably star-powered mages, and I’m not sure what else. Y’see, I start writing these things at the top, and finish when I think I’ve done enough, and given my tendency to go off on long, rambling, digressions about whatever strikes my fancy as I’m writing, I never really know at the beginning what it’s going to look like at the end.

Uncharacteristically logically, we move from charisma to morale. 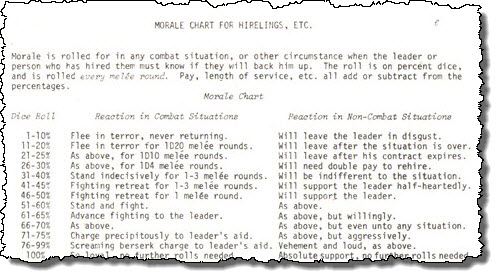 This is rolled every melee round, I mean, every melee round.2 Sh’yeah, right. That happened. Maybe, once. What really happened, in actual play, was the DM would roll once, maybe, at the start of the fight, and then remember to roll if something happened that caused him to think, “Wouldn’t it be fun if the hirelings broke and ran right about now?” (Or when a player said, “I order Knobby Foot to charge at the troll!”) The Charisma table, see prior post, did include a morale bonus, but the other suggested modifiers were up to the DM. Heh, heh, heh. (Well, I’m note sure… this being the Arduin Trilogy, I might stumble on them later on… or they might be referencing such modifiers as existed in the D&D of the time… or in some article in Alarums and Excursions that Dave used and that he just assumed everyone knew about. It was the way of things back then.)

“And she’s got purple hair, and glowing eyes, and a heart-shaped birthmark, and…”

(For those confused over the headings, go look here.)

Since you probably went through characters in Dave’s games the way I go through a bag of Cheetohs in my games, you might have needed something to distinguish Fred The Fighter XI from Fred the Fighter X. Enter the appearance chart, another fairly common aspect of the time. This has two parts… 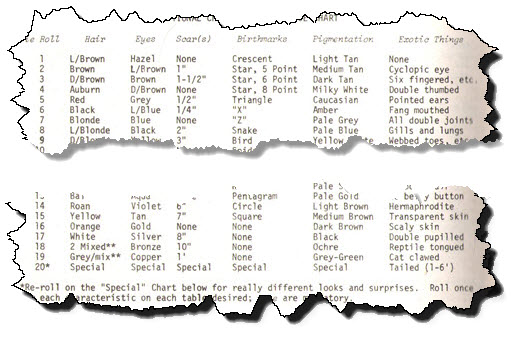 Note You Only Have A 5% Chance Of NOT Being Exotic

It is worth noting that having pale blue skin, or a pentagram-shaped birthmark, are occurrences on the non-special table. For the special table… 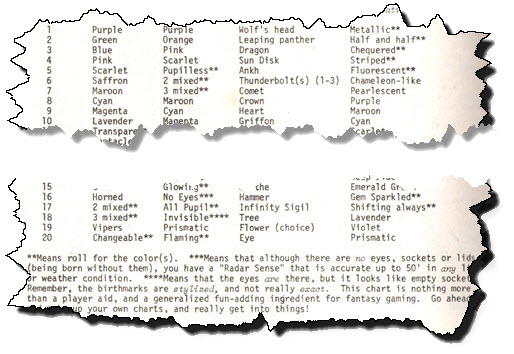 See, Pale Blue Is Normal, But DEEP Blue Is Special

One has to wonder how many times someone, either player or DM, tried to weasel some game effects out of this… like imposing a penalty on the thief for trying to hide when his skil was “Gem Sparkled Purple”.

You couldn’t kick a fanzine without hitting a new class in those days. Dave’s new classes ranged from the mundane-ish, like Traders, to the batshit crazy awesome, like Star Powered Mages.

I am 99.99% certain these were inspired by something, though I’m not sure what. Lensmen? Darkover? Something I’ve never heard of? Probably. IAE, they’re awesome.

A Star Powered Mage has a crystal embedded in their forehead at birth, which gives them access to “Cosmic Mana Power”. The crystals completely destroy themselves on their bearer’s death, and the means of manufacturing them is Lost Forever, so SPMs are correspondingly rare.

The color of your star reflects your alignment in the usual manner: Deepest black for eeeevil, glowing white for boring, I mean, good, etc.

The star holds the same amount of mana you normally get, so you have double mana points.

You have a -4 to resist psychic attacks, but you get ESP at 1st level and Telepathy at 12th, because, why not?

But there’s a catch, of course.

But you can regenerate instantly from death! With, erm, a catch…

So, you get instant and total regeneration, or, you go out in a blaze of glory.  BTW, if you haven’t seen Forbidden Planet yet, why haven’t you? It’s awesome. Go rent it or stream it or whatever you kids do to movies these days.

Just Remember That Thing We Never Told You Before!

Once more, I need to emphasize that one of the things I love to death about the Arduin Trilogy, and about similar works from the same era/by the same crowd, is the casual dropping of references to people, places, things, events, that have never been mentioned before and are usually never mentioned again. Of course I’ll remember that the Star Powered Ones sided with the Titans against civilization! How could I forget? (Since the gem is this huge glowing beacon on your forehead, I’m not sure how you can ‘tread with care’, but anyway…)

And I also want to praise the bombastic, declarative, “Know ye, O Prince…” style of this final paragraph. It’s great.

They’re like illusionists. But with sound. And they take forever to do anything. But they can weave spells together. And… smeg it, here’s the gist of it:

Bards, Or, The Non-Electric, Non-Light, Bard

The Arduin Grimoire had the experience point chart for Bards. Welcome To Skull Tower has the actual, erm, rules for them. Welcome To Old School Gaming! (I noted a few times that the Grimoire looked like it was pasted together from whatever notes Dave grabbed at the time; that the charts for bards and the rules for bards were in different piles of notes does not surprise me. )

Arduin Bards apparently can start as bards.. if you’ve ever read the original bard rules from The Dragon/AD&D, you’ll breathe a sigh of relief, as they were a nightmare of complexity and resulted in an overpowered class that could do damn-near anything. On the other hand, Arduin Bards are basically third-rate melee combatants with a tiny handful of special abilities. (They can perform Rune Singer magic (or magik) at their level-5, but with a base 65% chance of “Magik Fumble”). Their other abilities are…

To Be Fair, A 5% Chance Of Earning Money Is Still Better Than Most Musicians…

Thieves were the first step, in D&D, towards mechanics for something beyond hitting someone. To some people in the Old School Revisionism movement, the introduction of thieves in Greyhawk marked the point where everything began to go wrong (and given how soon Greyhawk appeared after the “Brown Box” original rules, this should tell you how narrow their definition of “Old School” is… and if it doesn’t, don’t worry, there’s some dead horses I’ll never get tired of beating). With the introduction of mechanics for climbing walls, hiding, picking locks, and so on, it was no longer a matter of convincing the DM you could do it (mostly by doing 1-6 points of Rhetoric Damage against his Stubborness Points, +5 for each potsticker you gave him), you had to roll the dice and take your chances, and your chances, frankly, sucked. A major aspect of gameplay in very old school games involved not manipulating the rules, but escaping the rules. The odds of success in many things “by the books” were very low; “rules mastery” in those days involved finding ways to accomplish your goals that weren’t covered by the rules, because the DM would probably give you much better odds. A typical technique was “Roll under the relevant attribute on a D20”, which meant you usually had much better than 50/50 odds. The primary thief abilities of hiding, climbing, and detecting/disarming traps were very common actions in a dungeon environment, so tying them to a particular class and then imposing limiting rules on them did a lot to change the dynamic of how actions were to be resolved, even in those early years.

So what did Dave do?

What any good DM of the era would, and did, do: Add more rules, more details, more modifiers!

We start off with this:

Please Note The First Column Is The Trap’s Level, Not The Thief’s Level

Please also note that this is the Trap Activation chart, not the trap Deactivation chart! This is used as the chance the trap goes off if the thief fails to deactivate it.

There’s a more important thing going on here, though, than Yet Another Way To Get Killed With A Bad Die Roll. The idea of ‘leveled’ traps — of some being more difficult to disarm than others — was not a part of the core paradigm. Most mechanics had a flat component to them — the saving throw against a first level spell was the same as the saving throw against a ninth level spell, a 17 Strength 12th level fighter had the same chance to break down a door as a 17 Strength 1st level fighter. Arduin introduced a lot of level-based mechanisms into the game, from scaling hit dice in monsters to, the traps above. Once more, we’re seeing ideas put into place that would not become ‘official’ D&D until Third Edition in 2000.

The Reset Chance, BTW, was the chance that after a trap had gone off in the thief’s face, it would “reset” to do so again, until it was successfully disarmed. Delayed Activation, in turn, was the chance the trap would go off 1-20 seconds later, perhaps when the party had gathered back around the chest and were wondering if the thief had managed to disarm it…

Here’s a portion of the Arduin Thief Abilities chart…

We follow with a handful of racial modifiers. Given the vast number of races in Arduin, even if we limit ourselves to those most likely to take up the thieving profession, it’s clear this was a case of “We’ve got maybe a quarter of a page, tops”. Presumably, anyone of a different species who wanted to play a thief could petition the DM for “reasonable” modifiers of this sort.

We’ll end here for now, for the perfectly logical reason that I’ve only scanned up to here in my book and don’t feel like scanning more right now. Next week… new classes from Saint to Courtesan, with a stopover at Slaver and Monk. (Possibly, as usual, I might write more or less.)

1: By “us”, I mean, “me”, and the voices in my head.
2:(Y’see, in the Grimoire, we used underlines for emphasis, but in Skull Tower, mid-70s typography has advanced to italics, in a different font, and trust me, that’s about the most subtle the humor is likely to get around here.)