Note: Not Actually In 3-D

Here we are again, continuing our expedition through the marvels, mysteries, and mayonnaise [[Note:Come up with something else that begins with ‘m’ before this is posted]] of “All The World’s Monsters”. Parts I and II can be found here and here. Part IV can be found here.

Hairy Howler: Not “Howler, Hairy”? Yeah, yeah, we beat that joke to death already. But that which is dead can never die! Anyway, as stated last week, this is a nine foot tall man-baboon hybrid… a maboon?… inspired by Hiero’s Journey by Sterling Lanier, which you should have read if you ever played Gamma World. It sometimes uses a meat cleaver as a weapon, with a +4 to hit and +5 to damage. Whoa.

Heffalump: An elephant-sized centipede “immune to lightning, fire, and spoken spells”. Known to prey on bears and young pigs. Sometimes accompanied by woozles. (Are there woozles in this book? (flip flip flip) No. No, there are not. For shame.)

The above video is clearly an inaccurate presentation.

Horned Bellower: A man sized, one horned, flying purple people… no, I mean, triceratops. Well, if it has one horn, it’s a monoceratops, isn’t it? Oh, it regenerates like a troll. And the horn is vorpal. And it detects treasure. With the horn. I’d say “You can’t make this shit up”, but, there’s the proof, in black and white. Someone surely did make it up.

Hound (Death, Hades, Night, Phase, Rock): I’ve discussed the tendency to create dragons, golems, and giants of every possible adjective… but hounds are kind of new. There’s generally only one or two new variants on “puppy” in most monster books, and they usually have some kind of sonic attack, because dog. Wolf. Howl. Trust me on this. When you’re charged with making up 12-14 monsters a day to meet a deadline, you’re not going to dig too deep in the idea mine. As soon as you get a concept you can hang a bunch of hit points and attack bonuses on, you run with it. But in this case… erm… these cases… the sonic stuff is skipped. The Hades Hound is a three-headed hell hound that breathes acid and chlorine in addition to flame. The Phase Hound is what happens when a hell hound and a phase spider love each other very much.

Icegrunt: A furry white boulder that breathes cold. Yeah. That’s what I said.

A Flying Tablecloth With A 60 Inch Tongue. This Is The Next Big Internet Meme. 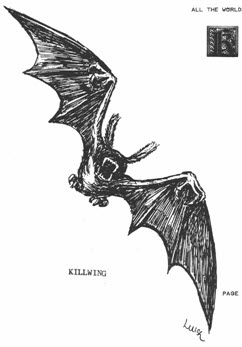 Not Sure I Like The Dark Knight’s New Costume

Killwing: It uses “microwave sound” to attack. What’s that? A really annoying “ding” that goes off every ten seconds no matter how much you scream from across the room “Shut up, you damn machine, I know the food is cooked!”?

Kobold: What’s this, you ask? Kobolds? No adjectives? Why are they even in a book of weird and wonderful creatures? They’re just core monsters!

Ah, but this is the edited Gilespie-Blacow-Slimax kobold.

Yeah. It sounds like something from the edges of physics, doesn’t it? “Well, you see, if you imagine the universe as a twelve-dimensional matrix of Gilespie-Blacow-Slimax conjugations, you can see that…”

But here it is. You make sense of it.

Lemming, Giant: If it bites you, you are infected with a “Death Wish” poison that will make you hunt down and kill those punks that tortured, raped, and killed your wife and daughter.

Libear: A “lion-bear-centaur”. It has the same chance of hugging as a werebear; nothing specifies the chances of kissing, fondling, or oral sex.

Longlicker: Giggity. Well, maybe not. It’s a giant sized anteater with a thirty foot tongue that “can impale its victims”, doing double damage. Naturally, no mechanic or percentage chance is provided for this. I am curious as to how this might play out in the afterlife.

“Oh, I died fighting Orcus to save the soul of the One True King of the Dwarves.”
“I perished holding a bridge against an army of trolls, allowing the villagers to flee to safety.”
“I was impaled on a thirty foot tongue.”
“Dude! Isn’t that how we’d all like to go? High-five!”

Minogon: A gorgon/minotaur crossbreed. Wasn’t this in one of the Arduin books? That wouldn’t be odd, per se, there’s a lot of crossover of contributors and no one claimed exclusivity to the critters in ATWM — nor could they, given how many are “based on” copyrighted works.  Well, if it was, I didn’t comment on it, having just wasted 10 minutes googling my own site for “medusa” and “gorgon”.

Morse: A mutated cross between a moose and a horse, with low-level telepathy which it can use to communicate simple messages using dots and dashes. (OK, that part’s not true. But the telepathy is.) Once more, Hiero’s Journey. Trust me, you’ll want a telepathic moose for your PC after you read it.

Nerve Flayer: It is “totally indescribable” but gorilla-sized. Anyone meeting its gaze will lose 1-3 life levels (and back then, level loss was nasty). Its claws also do lightning damage if both hit. If it kills someone with the lightning, it will dimension door back home and eat the corpse.

Nightstalker: An intrepid reporter who hunted down supernatural entities about 20 years before public tastes changed enough to make this sort of thing popular. Also, a “black velvet baboon” that will follow the party and attack at an opportune moment, e.g., just after combat.

Orgoyle: A creature whose diamond-patterned fur is greatly sought after by tailors and weavers, it has been hunted nearly to extinction and… no, wait. That’s the argyle. The orgoyle is an ogre/gargoyle crossbreed. That’s kind of cool, actually. Not necessarily as a full species, but as a unique individual in tribe of ogres or the result of yet another mad wizard’s experiment. Or, possibly, the nurtured, cared-for, and emotionally happy result of a love that was forbidden but could not be contained!

Panther: The hereditary enemy of dragons, it possesses a breath weapon which… dragons are immune to. Charles Darwin weeps. That’s kind of like Buffy the Vampire Slayer gaining superhuman speed, agility, and endurance, except when she’s fighting vampires. Please note this isn’t the “Panther, Anti-Draconic” or “Panther, Drakebane”, or anything… it’s just a panther. With a breath weapon. Here, read it:

Pegasone: Sorry for two scans in a row, but this is easier read than described.

Phase Wing: A killwing (see above) with phase spider powers. Because, why not? Why not a phase spider with three heads, and each head has a different breath weapon, and it’s got ten legs instead of eight, and when it bites you, you turn to stone? Hey, that’s kind of cool. Going to write that up.

Plink Plant: “Like many other plants, it detects body warmth within 60 feet.” Man, my science class’ section on botany left out all the cool stuff!

Quelt: What do you get when cross a crab with a World War I helmet? I dunno, but it’s killing me! 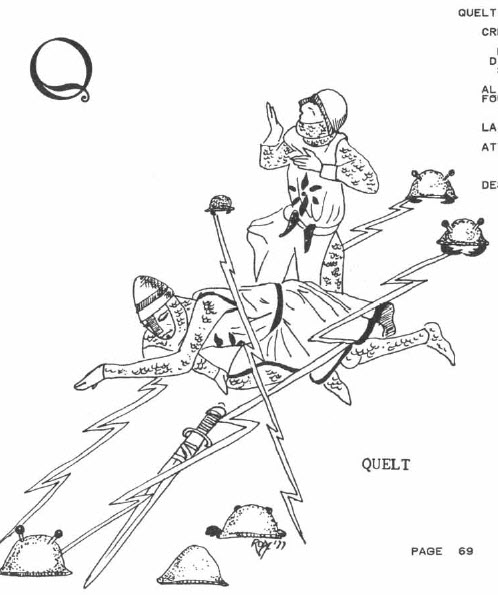 This May Be More Embarrassing Than Getting Killed By A Longlicker

And that seems like a good place to stop for today. At this rate, the next part should be the last of Volume I. Please be sure to spread links to here around, like a virulent plague infesting the Internet.