As Long As The Ice Cream Machine Wasn’t Involved

If You Watch Competitive Cooking, You Have Learned To Fear The Ice Cream Machine

Because I need something to watch while exercising, I eventually ended up on the Dragonriders cartoon on Netflix, which I learned was one of approximately four dozen spinoffs that came out between 2010 and now, and I also learned Netflix doesn’t have the first two seasons. While not exactly as tightly-plotted as Westworld or Game of Thrones, it is also less episodic than kid shows were in my day (“In my day, Flintstones wasn’t a cartoon, it was a documentary!”), so I missed some Very Important Events that set up Seasons 3 and onwards (confusingly, Season 3 is called Season 1, because they changed the show’s name, but it is tightly tied to the earlier seasons).

As kids’ TV goes, it’s fun enough for me to watch while exercising, with well-defined characters, acceptable CGI given the budget, good voice acting, and a smegton of ideas to steal. Which, finally, brings us to this article.

A good chunk of the episodes can be described as “The main characters encounter a new dragon/an old dragon in an unexpected situation and must resolve some problem it is causing”. This means the writers have to keep coming up with interesting new twists on the basic theme of “reptilian creature that breathes something”. The world has so many species of dragon occupying so many different ecological niches its hard to understand how humans, sheep, and yaks managed to evolve at all. On the other hand, I haven’t seen any non-dragon predators like wolves or tigers, so, maybe, on this world (allegedly Earth, they call themselves Vikings and worship Thor and Loki), only herbivorous mammal (and humans) evolved. Or, maybe, it’s a lost colony world, ala Pern, where humans brought themselves and a few key livestock animals with them to settle and then lost most of their technology. You know, this would explain how Viking teenagers casually discuss evolution and adaptive radiation — as happened in the episode that inspired this article. OK, let’s go with that. (Naturally, I couldn’t leave well enough alone, and researched this on the typically insanely over-comprehensive Wiki. Wolves, lions, and bears are mentioned, and wolfskin and bearskin pelts and similar animal byproducts are seen on the program, but no living specimens are actually shown in-canon. Show-canon. There’s also book-canon, but from what I’ve read, they deviate so much they’re effectively two different settings that share character names. I’m only concerned with what the Wiki terms “franchise” canon. But I digress. Surprise, surprise, surprise.)

Speed Stingers are “small” (horse-sized, which is small for a dragon) dragons who are… wait for it… very fast and armed with stingers. Said stingers induce paralysis, played for comedic effect in the episode but which can be used for horrific effect in a game, as the rest of the pack runs in, raptor-style, to feed on the helpless victim. Mmmm.

A word on the intelligence of draconis somnio opus: (Dreamworks Dragon) In general, they seem capable of understanding a lot of human speech, recognizing friends and foes, and following complex plans. They don’t generally speak, write, or use tools (some have been taught to do so by humans). Speed stingers are considered  fairly intelligent creatures, so making them as smart as some of the dimmer humanoid races seems right to me.

I was tempted to stat these for Pathfinder as Magical Beasts, not actual Dragons, but it seems kind of wrong to have to say “None of your dragon-related mechanics actually affect them”. Also,  “How To Train Your Magical Beast” hardly has the same ring to it, does it? They do lack the general draconic immunity to sleep and paralysis, but individual species may have such resistance. (For example, the speed stinger is immune to paralysis, but not sleep.)

Here’s the Pathfinder version, followed by the AD&D 1e version. 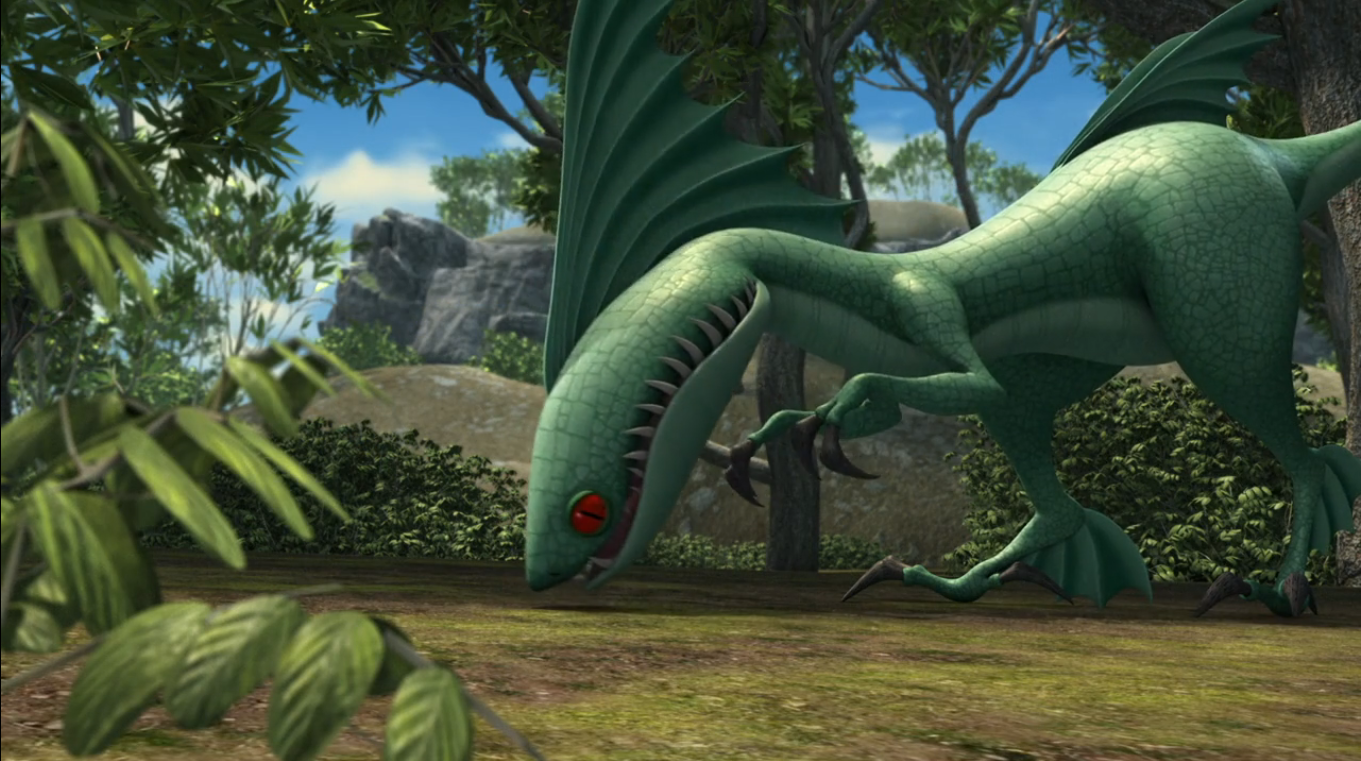 Unlike most dragons, they are flightless, but have become widespread among the northern archipelagoes by evolving large, webbed, feet which enable to them to dash across the water without sinking.
——————–
Statistics
——————–
Str 16, Dex 18, Con 14, Int 7, Wis 14, Cha 12
Base Atk +5; CMB +9; CMD 23
Feats Outflank[APG], Pack Attack[UC], Ability Focus (poison)
Skills Acrobatics +9 (+17 to jump), Climb +10, Escape Artist +6, Perception +9, Survival +8, Swim +8
——————–
Special Abilities
——————–
Darkvision (90 feet) You can see in the dark (black and white only).
Immunity to Paralysis You are immune to paralysis.
Low-Light Vision See twice as far as a human in dim light, distinguishing color and detail.
Outflank Increase flank bonus by +2 if flanking ally has same feat. If you crit, ally gets an AoO.
Pack Attack Ally’s attack allows you to take a 5-foot step
Paralytic Poison (At will, DC 16) (Ex) Anyone stung must make a DC 16 Fort save or be paralyzed for 1d4 hours,
——————–
Ecology
——————–
Environment Temperate or Cold Coastline
Organization pair, pack (3-6), swarm (7-12)
Treasure incidental

(All calculations, etc., done via Hero Lab. So blame them for broken math.)

Note: See above for description and general tactics.This section provides the AD&D-specific mechanics.

Paralyzing Sting: Any creature hit with the speed stinger’s sting attack must save vs. poison or be paralyzed for 1d4 hours.
Offensive Pack Tactics: If two or more speed stingers are adjacent to the same target, they get a +1 to attack rolls for each adjacent speed stinger other than themselves. (So 2 stingers: Each gets +1 to attack rolls; 3 stingers: Each gets +2 to attack rolls, etc.)
Defensive Pack Tactics: A speed stinger with at least one ally adjacent to an enemy can break off from melee without suffering an attack from the aforementioned enemy.[1] This must be done before any of the adjacent speed stringers attack, thus reducing their potential bonus. (Three speed stringers surround Olaf the Incontinent. One is very low on HP and wants to flee. It does so safely, but the two remaining now have only a +1 attack bonus each.)

[1] DMG p70, for those of you who forgot this rule existed before 3e made it such a major part of the combat mechanics. Nasty, too.