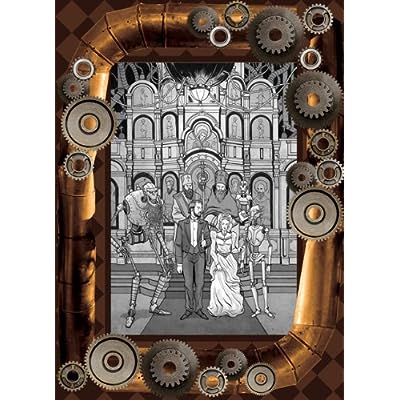 Having decided to end a rather long period where I haven’t done a great deal of reading (given I used to go through 2-3 books a week and I’ve been barely doing one book every month or two, it’s pathetic), I have also decided to try to make some use of this reading time in terms of adding some content to this blog. Thus, as I finish any book which might even be vaguely useful to gamers, I will compose an essay/rant/review on it here, in the vauge hope someone finds it useful. This time, we shall be looking at “Android Karenina”.

(And if you find this article intriguing and/or useful and seek to purchase the book, well, I’ve just set up an amazon affiliates link.)

In Which The Supposed English Major Makes A Confession

Well, not much of one, since reading Russian novels isn’t presumably part of being an English major, but I haven’t read most so-called “classics” of English or American literature either, and those which I have read, for the most part, I haven’t liked all that much. I am totally in agreement with the kids from South Park when it comes to “Catcher In The Rye”, for example. Anyway, the point is, I have not read Leo Tolstoy’s “Anna Karenina”, and thus had very little idea as to the original novel’s plot. I had a very vague notion a train was involved somehow, and that’s about it. Therefore, I am not looking at this from the point of view of comparing the original to the steampunk mashup, or discerning if the themes, tropes, concepts, etc, of the original novel are intact or being commented on, but solely on the basis of “Is this an entertaining book on its own?”

The answer is “Yes”.

The Plot (Some Spoilers)

The primary plot of the novel (the one with the robots, I have no idea about the real one) concerns the romance between Anna, a married woman, and Count Vronsky, a dashing soldier, who is not the man Anna is married too. Anna’s husband is cold and psychologically abusive, making this prime Lifetime Network fodder. Of course, Anna is a bit “high maintenance” herself, and she seems to want Romance and Excitement and Passion and none of the dull daily things that are necessary for having a life with someone, not just an affair. Oh, yes, and there’s robots. Lots and lots and lots of robots. A whole frakkin’ smegload of robots.

The chief conceit of the novel is that some time in the past (no dates are given, but at least 100 years), a metal called “Groznium” was discovered, and this metal has made possible the easy construction of robots of every type and description. I mean, they use robot dice. The food serving trays walk themselves to the kitchen, where robot dishwashers wash them. Just about every convenience of life is possessed by some small modicum of mobility and volition. The simplest robots, the “serving trays” and the like, are Class I; more advanced robots, capable of performing many of the roles of human servants, but with limited self awareness and vocabulary, are “class II” (Typical class II robots work as bookkeepers, assistants to doctors, or coachmen… driving robot coaches, of course!), while the most advanced types are the “Class III” robots, also known as “Beloved Companions”. Every member of the social elite (and there are virtually no humans in the book, until the very end, who are not) gets a Beloved Companion when they are 18, and these robots are their constant friends, confidants, aides, and guides. Each is unique and in tune with their “owner”, and a Beloved Companion whose human dies is a truly lost and pathetic thing. The book takes its title from Anna Karenina’s companion, Android Karenina. Thus, in addition to the fact every character has a ridiculously long Russian name, and a nickname, and a few other names, they also all have Companions associated with them. Perhaps in the original novel, these were roles performed by human servants; I don’t know.

All is not paradise in this alternate-Russia, despite mag-lev trains which cross the country and weekend excursions to the moon or the orbit of Venus. A group of terrorist scientists, convinced that technology is still not progressing fast enough, regularly attacks peaceful gatherings, and there are some wonderfully horrific creations involved, including emotion bombs — bombs set off by strong emotions, often tuned to a specific individuals feelings as a trap. There’s also a slowly-growing and developing plot by Anna’s husband, whose “beloved companion” is not a humanoid robot, not a wolf robot, but a metallic faceplate with a quite sinister mind of its own, to consolidate power and eliminate the use of robots by all but the increasingly isolated and tyrannical central government, and the revelation of who is behind this scheme is a major turning point in the plot, as the relatively slow and grandiose web of storylines and characters ultimately comes together, resulting in two different endings. (Time travel is involved.) To the book’s credit, few of the major twists at the end feel like deus ex machina or simply pulled out of nowhere at the last minute — there’s plenty of evidence “something” is up, with only vague hints as to what. The scope of the “truth” is grander than was really hinted at, but the nature of it is in keeping with what we’d seen before.

The world of Android Karenina’s Russia is one ripe for gaming. It’s a steampunk wonderland, and one of the few steampunk novels to veer away from the Dystopian. Indeed, the true source of evil in the book is not too much technology, but those who would remove it or control it. Groznium has liberated man, even the poor, from back-breaking manual labor. Rather than being crushed and disempowered by soulless technology, the folk of this world lead comfortable, happy, lives… or sometimes unhappy lives, but their unhappiness comes from their humanity, not from their tools. While the initial setup might seem ripe for a robot rebellion type plotline, none such occurs (well, not as such), and the Beloved Companions remain loyal unto death throughout. The final phase of the novel, where the “Class III” robots are being rounded up for “upgrading”, strongly and rather obviously invokes the rise of the Nazi Party in Germany, the Communist Party in Russia, and similar tyrannies. Since the original novel was written in the late 19th century, I am curious if this theme was part of the book; the summaries I’ve read imply it is not.

So how to play in it?

The most interesting aspect, from a gaming perspective, is the Beloved Companions. Since so little detail is given on the lives of those who don’t possess them, a strong presumption is that PCs in this setting will be of the genteel classes, and thus will have a companion robot. While the Class III robots are self-aware and seemingly free willed, to an extent, they are invariably loyal to, and somewhat reflective of, their masters. This makes them overall unsuitable as player characters in themselves, so you have an interesting aspect to character creation — deciding on, and defining, the nature of your Companion, including what special skills it might have, how it expresses itself, and how it interacts with you. While many games have some system for sidekicks, assistants, and so on, I don’t think any game assumes that every character will have one, and asking the DM to run that many extra NPCs is probably a bit much.

The characters themselves, with a few exceptions, are fairly normal in their powers and abilities. While Count Vronsky is an able and skilled soldier, he’s not an action hero, and most of the other characters are pretty average. The focus of the novel is on human drama against a backdrop of steampunk super-technology, radical social change, and the occasional giant bio-organic insect erupting violently from within a dying man’s body. Given that,I’d point to either GURPS, at a relatively low point base (50-75 points, plus disads), or to Word of Darkness (core rules for non-templated humans, maybe with a few extra dots for general competence). Since the Beloved Companion is an assumed part of the character, I would provide a “basic” one for free, with the option of increasing its functionality and usefulness by spending extra points. (For WOD, I’d create a new merit, called “Companion”, with every character getting a dot in it; extra dots can be purchased as usual.)

So What Do You Do?

The time period in which the novel is set is one of slowly growing upheaval, fear, and “the enemy within”. There’s a very strong sense of struggling to maintain the appearance of perfect normalcy while increasingly abnormal things are happening. Player Characters, as members of the elite, would simultaneously jockey for social and political power, advantageous marriages, and personal desires, while at the same time dealing with the ever-growing threat both internal and external. There’s a strong implication that the technology of groznium is not widely exported outside of Russia, and that other nations seek to gain control over it (good luck, given the vast technological difference). The terrorist organization, ConSciYa, has spies and saboteurs everywhere, and must be hunted down. An unknown and hostile alien form of life has begun to appear in the world, spawning hideous monsters prone to violent attack. A “typical” adventure or scenario might begin with the explosion of emotion bombs at a gala party; the PCs must deal with the aftermath, track down the perpetrators, and avoid any accusations of complicity which might be flung at them by rivals, both PC and NPC. An entire military campaign could be set in one of the more distant parts of the nation, with robot body armor, lightning guns, and metal war dogs battling against less well equipped foes. The lunar base could come under assault by the aliens. The government may start rumors of robots who have learned to overcome the “Iron Laws” that keep them from harming a human, in order to increase its own power to track down rogues. And all of this can and should be done as an overlay to a game of social climbing, status, betrayal, and revenge. I’d recommend a shorter, well-focused campaign, a story arc 3-5 game sessions in length, with each player having specific goals for his character and the background events building to some sort of climax during it all.

And So, In Conclusion

“Android Karenina”, as a game setting, differs from a lot of other Steampunk backgrounds. There’s less of a focus on High Adventure or on the horrors of the early Industrial Age. Gamers who prefer more personal stories and more roleplaying may find it a perfect background to create interesting and unique characters. The challenge of having two characters — the PC and the Beloved Companion — will also appeal to the more acting/emoting kind of gamer, who may well roleplay conversations with himself (though not too much of that, as the other players will likely get bored.) The world of the novel outside the main centers of action is only barely sketched, leaving a lot of room for the GM to fill in — are there undersea cities in the Baltic Sea? Are there giant dirigible fortresses drifting across the sky? Just how much has groznium technology touched the rest of the world?

If you’re looking for a different spin on steampunk settings, read the book and see what might inspire you. And if you decide you want to buy the book, there’s a little button to click right here…