It is difficult to say with certainty precisely how the creatures known as Ooze Dragons came to be. The dominant theory is that they were created by the Demon Lord of Slimes, most likely in mockery of a certain former demon who managed to jump herself up to godhood via the worship of the chromatic dragons. Another theory is that the first Ooze Dragon was an accident, the result of a battle between a dragon and an ooze, most likely a black pudding, in some area of high and wild magic.

Ooze Dragons, while sapient, are not very bright. They are among the stupidest of the dragons, and their soft, malleable bodies are more revolting than fearsome. An Ooze Dragon cannot even fly — its wings are great sheets of slime, constantly dripping, and they cannot catch or hold the air. It can, however, slowly climb up or down almost any surface.

Like all dragons, Ooze Dragons enjoy their hordes, but their acidic bodies reduce most treasure to useless goop. Any items which survive are likely either ceramic, some jewels, or powerful magic. The most intelligent of Ooze Dragons will actually have their hordes managed and maintained by servants, usually kobolds who can’t find a more respectable dragon to grovel under.

Ooze Dragons are asexual. They reproduce via the Ooze Drakes which split off from their bodies when they are wounded. Very rarely, an Ooze Drake will slither away from its "parent" and will, eventually, become an Ooze Dragon Wyrmling and then age normally.

Full stat blocks for the Ooze Dragon and his Ooze Drakes after the break!

(A side note — I’ve been using image files instead of text blocks due to nightmares with trying to paste the formatted text into my Joomla editor. I hope this isn’t problematic for anyone.) 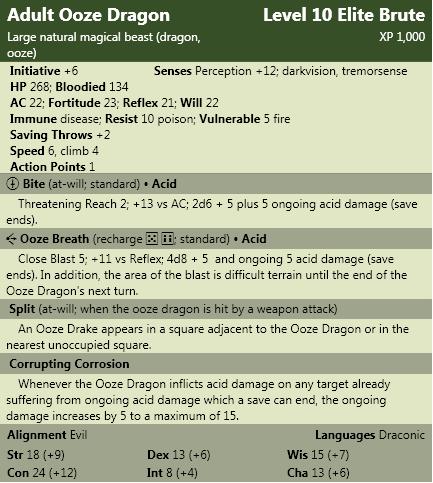