No, Not The One By Mophidius.

No, Not The One By Decipher.

No, Not The One By FASA.

Wait, There Was Another One? 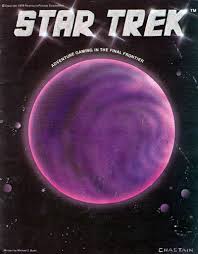 Not Sure If This Was The Earlier Or Later Printing, But It’s The One I Remember

This is a game I remember seeing in the game store I bought my first D&D boxed set in, circa late 1978 or early 1979. It was produced under license by Heritage Miniatures, primarily as a tie-in to their line of, well, miniatures.

The rules system was based on “Space Patrol”, from GameScience, which was transparently a non-licensed attempt at a Star Trek game. (I find it interesting how much late-70s material drew heavily on Star Trek vs. Star Wars. I suspect it had a lot to do with the makeup of the gaming community at the time… a mix of older wargamers and fans drawn from the more literary side of fandom. Star Trek had, grudgingly, weaseled its way into “mainstream” SF conventions, but Star Wars was still the new kid on the block and seen as somewhat of an embarrassing throwback as science fiction struggled for respect and legitimacy and not being “all the Buck Rogers stuff”. If you look at pre-Star Wars SF cinema in the 1970s, a lot of the higher-budget entries were depressing, self-important, angst-filled dystopian epics about the evils of war and industrialization and how technology was dehumanizing us all, blah, blah, blah. But I digress.) Anyway, the pre-digression point was that, when looking for a “framework” for a sci-fi RPG, “Star Trek” was a common “go to”, just as Tolkien served as a baseline for fantasy. It (Trek) provided a set of tropes the community knew so intuitively they needed minimum explicit communication. The “implied world” was clear. 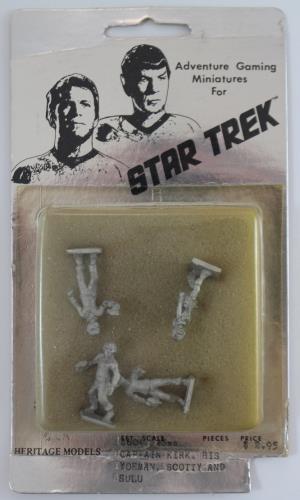 “His Yeoman”… What, She Doesn’t Even Get A Name?

So Heritage grabbed the license to make some minis. This was in the age before “The Motion Picture”, in the era when no one really understood the power of licensing (something else Star Wars was changing), and a lot of semi-official stuff was being published. The series had been cancelled almost a decade earlier, and that anyone still cared about it or even remembered it, in an age with no videotapes or DVDs, just reruns on local stations at odd hours, was probably incomprehensible to the rights holders. So if someone wanted to toss money at them for some reason, why not?

Into The (Warp) Breach!

The introduction to the RPG informs us that Star Trek was a short-lived television series that managed to survive almost a decade after cancellation due to the quality of its writing and characterization, which is an odd thing to start with in a game almost certainly not going to be purchased by anyone not already a fan. In then informs us it’s not like “parchisi” (sic) or Monopoly, and reminds us that “role playing” is something perfectly normal, as psychiatrists use it when dealing with psychotic mass murderers. (I may be slightly paraphrasing, but that’s the gist of it.) A player portraying Kirk must “do all the things expected of the leader of the Starship Enterprise”, which makes me wonder about some of the rules systems yet to come. (“Roll 2d6 on the Seduce Alien Priestess Table…”)

Oh, the DM here is the “Mission Master”.

Group size is recommended to be no more than 6 characters (which makes sense), because, after all, the Star Trek transporter only has six places.  OK…

Somehow, in the mere 40 pages of the book, there’s both a “Basic Game” and an “Advanced Game”. Since it’s the Advanced Game that has character creation, and the whole point of these articles is to create characters, I guess we’re jumping ahead, but I’ll make notes as I skim along.

This Is In No Way Just Lifted From Some Other Game. It Is Totally What a Star Trek Shuttle Looks Like From The Top.

The “basic scenario” is a de facto dungeon crawl where the PCs wander around a small map, running into assorted encounters while seeking dilithium. This, by the way, is a “Galileo Class Shuttle”:

There is also an “Advanced Game Scenario” where the players wander a different map looking for a lost Slaver artifact, which may have been stolen by Kzinti or Klingons (Mission Master’s choice) and which features a random encounter table for monsters in the jungle, because a mugato, a Capellen power-cat, and some “pod plants” would all be on the same planet, just waiting for adventurers. Why not?

Y’all notice an interesting linguistic quirk in the writing? It’s “Initiation”, not “Initiative”, and “Character Creating”, not “Creation”.

There are now eight characteristics — the six previously discussed, Size, and Movement.

Let’s roll for the first six. It doesn’t really say if this is in order or not, so, let’s assume it is.

Strength: 8. This is going typically.
Dexterity: 15. Ok, not bad.
Luck: 13
Mentality: 9. Oy.
Charisma: 10. No green alien babes for me.
Constitution: 17(!) Wow. Since this is effectively hit points, I see a future in security. High Dex and Luck both help with ranged combat.

I can now apply racial modifiers. No, first, psionics. I have a 1% chance of having psionics. I rolled a 94. So, no. (If I’d gotten psionics, I would further have had a 2% chance of having Teleportation. There is, by the way, almost a full page of rules dedicated to psionics, something that will (other than Vulcan abilities) rarely enter play. Go figure.)

There isn’t a list of acceptable PC races and their stat modifiers; there’s a section on “Familiar Star Trek Life Forms” that includes everything from Andorians to those flying blobs that take over your mind to Salt Vampires. Some of them are clearly not intended as actual game entities (the “gossamer mice” from the animated episode “The Terratin Incident” are just… mice. They occasionally turn invisible, true, but they’re still just mice, and have no stats offered here.), some are “monsters”,. and some are possible PC races. The mechanical modifiers vary: Kzinti roll 4 dice for Strength and get +5 to Dexterity, for example, mixing two different ways to modify base attributes.

Andorians gain +2 Str, +3 Dex, and +2 Con, with no listed drawbacks or penalties. This neatly minimizes my low Strength score and amps up my two already-decent scores. So, Andorian security dude it is!

I now need to roll for my Size. Base size is 175 cm, which I believe is six furlongs, or possibly three hogsheads. I roll a 4-sided and a 20-sided die. I get a ‘2’ and a ’16’, which the rules assume I will read as a “6”, because this was when D20s were numbered 1-10 twice, by default. Following the somewhat confusing description, this means I subtract 6 from my height, so 169 cm.

My movement is 11 meters per second, and neither my size nor my strength is sufficiently outre to influence this.

Next we have three pages or so of generating random alien monsters for the PCs to fight.

The character samples and combat rules both list levels of hand to hand combat skill, but there’s no particular rules for assigning this at the start. It starts at 1, I guess? There’s a mention that the MM can reward “successful” scenarios by upgrading character abilities, but again, there’s no specifics. The sample characters are assigned to “Sciences”, “Services”, “Command”, etc., but there’s no guidelines for this for new characters, or what this might impact. There are several pages of weapons and armor, with advanced statistics and rules for attack and defense (along with a cautionary note that Star Trek creatures rarely attack without cause, and that one shouldn’t create unkillable monsters just because the players annoyed you).

And that’s really about it. No spaceship rules… not that that’s entirely unusual, grumble grumble, for games from this era… no real skills or advancement, very little, really, beyond lists of things to fight and the weapons used to fight them with.

There were no official follow-ons to this edition, but there were a handful of unofficial game articles published over the years in “Different Worlds”. Given the huge jump in both quality and completeness of rules offered by the FASA edition a few years later, it’s unsurprising this early effort – perhaps the first licensed science fiction RPG? – has been generally forgotten.