(Not Gary Gygax’s Finest Hour… Or  Week… Or Year…)

So, what happens to an iconic creator when, for various reasons, he can no longer work on the products that made him so iconic? Well, he can start a failed computer company, or a failed comic book company, or produce a failed roleplaying game. Given the nature of this site, I hope you don’t have to guess too hard what I’m about to cover. (Hint: Read the title. It’s in ALL CAPS!)

CYBORG COMMANDO (this is how it’s written throughout the rules, and that’s how I’m going to write it here) is about COMMANDOS that are CYBORGS. What does it profit a man to gain built in missile launchers if he loses his soul? How much of your humanity will you sacrifice, to save humanity? At what point are you more metal than man? Is humanity a thing of the flesh, or of the soul? Are you more inhuman than the monsters you were created to fight? These, and other questions, are totally not even remotely asked in this game. CYBORG COMMANDO is about kicking alien ass with your built in cyber powers, and there is nothing wrong with that premise… but, according to many reviews and writeups, there’s a hell of a lot wrong with the game as a game. Or… is there? (Probably.) I’m going to find out, and you’re going to join me for the trip. (Or you’ve already dismissed this page and are eagerly looking to see if there’s any updates on goatswithboats.com.)

CYBORG COMMANDO begins by noting that we invented television in the 1940s and VCRs in the 1970s, so, by 2035, it’s only logical we’ll have discovered superconductors, direct neural interfaces to computers, and astral projection. Wait, what?

According to the rules, one of the key technologies is “psychogenics”, which is “a hard, critical, look at ESP and the Occult. The real and provable has been separated from the fantastic and imaginary”.

Comments like this in games always irk me, because I can never tell if they reflect the game world, which is free to rewrite the laws of the universe as needed to create the desired setting, or the opinions of the writers about actual reality, which would mark them as doofuses. Doofi? (There was rather a fad in the late 1970s, a very silly era, towards believing there was ‘scientific proof’ of the paranormal, and it was only a matter of time until ‘psychic powers’ were as well documented and testable as any other phenomenon. Then someone got stage magicians to perform the tests, rather than scientists, and, lo and behold, the psychics suddenly had more performance problems than a teenage nerd at his first Dragoncon.) Until I know better, I’ll give the writers the benefit of the doubt and assume they were just invoking hoary sci-fi tropes instead of being taken in by a lot of hokum.

Your CYBORG COMMANDO character (CC), is a member of the CYBORG COMMANDO Force (CCF). The rules recommend you create a basic character first, and not use the advanced rules until you’ve “played a few games”. Well, I don’t plan to play any games of this, but, let’s see how the basic chargen looks, at least.

In the 1990s, a common fad in game design was coming up with new terms for old concepts, terms which added nothing to information content but were different for the sake of being different. White Wolf, I am looking at you. However, Cyb…er… CYBORG COMMANDO goes those games one better, and introduces a new system for tracking time, which is based on the decimal system. (It also has a new system for tracking distance. You can convert their new system to metric, or to the English system, but the rulebook pretty much says you’re a Neanderthal moron if you do that. I mean, everyone will be using metric by the year 2000, right?). Oh, also, you get a cutesy mnemonic for remembering the various turn types: CAST. (Combat, Active, Standard, Travel). Gygax was big on these; in Danjorous Gourneys, he had the BUC — “Basic Unit Of Currency”. So much better than “gold piece”, amirite?

Anyway, we now get a few pages of lame fanfiction. Again, this predates White Wolf’s “You can’t play the game until you read the first few pages of my shitty novel” editorial style by many years. I won’t inflict it on you, but, apparently, this is one of the first cyborgs. 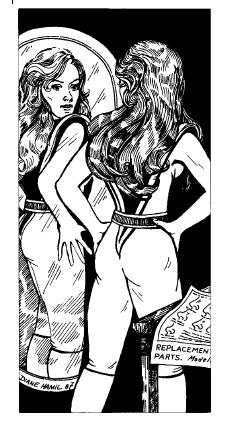 God is watching you, Gaius.

Oh yeah, skimming this turgid drivel, I happened to notice some of the “real and provable” psychogenic powers include astral projection and spirit photography. SCIENCE!

OK. See, this is what gaming is about. Hot cyborg chicks and guys with guns. Oh, yeah…. (You have to read that in a “Duffman” voice.)

How To Use The Dice

OK, so, sometimes, an idea comes along that’s so radical and strange that people mock it because they don’t understand it, and, after years of ridicule, it is finally understood that it is a much better way of doing things and everyone claims they supported it all along. However, ninety nine point nine nine nine nine percent of the time, an idea that everyone laughs at turns out to be a really stupid and laughable idea after all. So it is that, as far as I know, no other game has ever used CYBORG COMMANDO’s “d10x” dice mechanic, which consists of rolling 2d10 and multiplying them. This produces a number from 1 to 100, except with a completely weird probability distribution that is so unintuitive that the game spends  three full pages of small type explaining it and graphing it.

OK, now that we’re done with the term papers for “Creative Writing 101” and “Introduction to Statistics”, we can get to the game.

The boilerplate introduction is boilerplate. You start with creating who you were before you became a deadly killing machine. Hmm…. you know, this is a lot like NWODs “normal+template” system. Am I the only person who has noted the similarities here? This is getting… interesting. But let’s go on.

There are Stats and Skills, and the unit of measurement for each is a Point, abbreviated SP, which is thus both Stat Points and Skill Points, and I think my small intestine is trying to climb into my throat and throttle me to save me from such a bass-ackward way of putting things together. OK, try to follow me: You have 60 SP, of which you must use 20 for Stats, but you may use as many as 50, so your Skills will be between 20 and 40 and oh Darwin shoot me now. Look. I like point based systems. However, this kind of system is much better implemented by using “points” to buy various things that have various costs. A stat and a skill each cost 1 SP per point, drawn from the same pool, with a pretty random limit on how they can be divided up.

Oh, yeah, the stats are Mental, Neural, and Physical. They represent exactly what you think they do.

Unfortunately, providing a single data point is not all that helpful; what are the expected maximums and minimums? If I want to be exceptionally strong, is that 20 Physical or 30 or 15?

Anyway, I need to decide how to split my SP into S and S. I’ll go with 30 in each. Uhm. Time to get some kind of character concept. At this point in the game, I know I’m an astrally projecting kirlian photographing machine man who fights giant bugs with pew pew lasers. Lemme flip through the crappy fanfic again… uhm… a whole lot of background on some NPCs and how they were accused of being the antichrist (seriously. That’s in there. Ver-frakkin-batim.), and blah blah the alien invaders timetable and plan blah blah and our last hope is the CYBORG COMMANDO Force… but there’s not a lot here about what kind of people get picked to be CYBORG COMMANDOs, or what kinds of roles they fulfill, or anything useful like that. (We do learn that the aliens never “faced a race so creative, quick to develop, and tenacious as Man”. That’s good to know. We will kick alien bug slime ass! Erm… that came out wrong.)

Well, shit. Honestly, I know so little about the setting or what I can do in it at this point that I don’t have a single character concept beyond “Marine Jarhead dumped into a Cyborg Body”, and while that’s probably very viable, I do want to give the game as fair as a shake as possible and at least see what else I could be or how broad the range of possible characters is. I’ll flip through the book and see if anything inspires me. You can read about what I decide on tomorrow (or whenever I update this).

(Just as a reminder, these articles are written literally on the go, with me flipping open pages from front-to-back, following the rules, and documenting what I roll, if I have to roll dice. I do not know, right now, what will follow… you and me, pal, we’re on an amazing journey of discovery into the incredible world of… CYBORRRRG COMMMANNNDOOOOO!)