Firefly is one of those games I snarfed up at GenCon and then didn’t read. I assumed it was a re-release of the Serenity game from 2010, but it looks like a totally different system. I dimly recall the Firefly license and the Serenity license were owned by different people, which is like having the Star Trek movies and the Star Trek TV series owned by… OK, bad example. I mean, like having half your superheroes owned by one company and the other half owned by… yeah, right, never mind. Anyway. Firefly.

Flipping through it, this looks very similar to Star Wars in one way: It features smugglers in a run-down ship struggling to make a profit while avoiding a fascistic government that is hunting down people with illegal psychic powers. No, wait. I mean, it uses a “customize a template” model.

So, you’ve got three attributes (Physical, Mental, Social), each of which seems to govern a set of skills, and you’ve got “Distinctions”, which, instead of describing your scars and unusual accent, are small sets of abilities/tweaks that trigger under various circumstances, such as “I Know A Guy: Spend one Plot Point to create D8 Asset when you call in a shady friend with the skills you need.” Each Distinction has three steps, the first of which seems to always be “Gain 1 Plot Point when you roll a D4 instead of a D8”.

The dice pool system is “Roll a bunch of dice (which and how many is situational, but always at least attribute + skill) then add the highest 2, which is compared to a target number. You can also spend plot points to add more of your dice to the roll, and GM can do likewise for NPCs. There’s other complexities, but the focus of these articles is characters, not system analysis. So, let’s focus!

(The above was followed by 10 minutes of scrolling through random unrelated web sites.)

In a real campaign where I was making a character to play for months, I probably work with a GM to make my own Distinctions. But in this case, I’m going for the simplest path.

Looking over the list of archetypes, I see “Battle Worn Bounty Hunter” and that appeals for many reasons, only most of which are because I’ve had this video playing a lot.

Interestingly, the archetypes are alphabetical but divided by home system/region. For those who haven’t obsessively devoured Firefly lore, the ‘verse is a small star cluster surrounded by terraformed worlds. Or it might be a quintenary (sp?) system.  It’s really unclear if there’s FTL or even relativistic near-lightspeed drive, but everything seems to be within a few weeks of travel of each other. “Battle Worn Bounty Hunter” is in the section about The Rim, containing the Blue Sun and Kalidasa systems. The name tables go 2-24, so, I figure, 2d12. I end up with Marcus O’Sullivan. I can live with that. 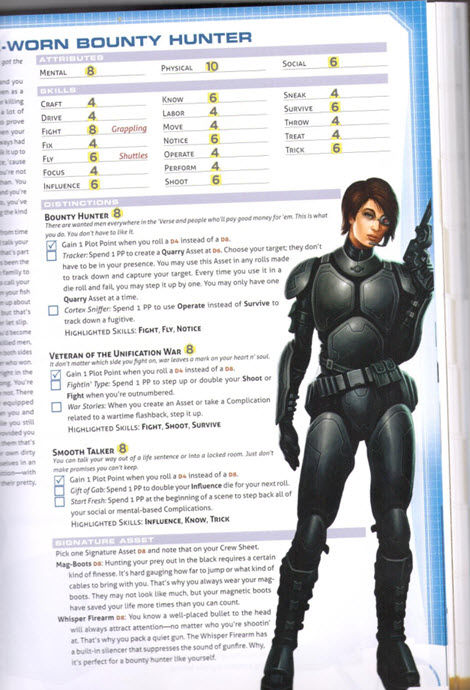 I am not squooshing my 55.00 book flat, and I’m not paying for a PDF, and I’m not going to type in all the bits from the character template, so, y’all will have to live with a slightly imperfect scan. Then I’ll specify the changes I plan to make.

If it’s not clear, the yellow backdrop to each number is a die shape — 4,8, etc.

First thing is to pick two distinctions, in addition to the marked default. I will pick “Fightin’ Type” and “Start Fresh”.

The highlighted skills for each Distinction are automatically stepped up — everything normally defaults to D4. In addition, I have 9 points. Stepping up a highlighted skill costs 1 per die (max D12), while others cost 2 per die.

And, uhm, I haven’t typed anything in the past 20 minutes because it took forever to locate the skill descriptions: A whole half-column! To say they’re broadly defined is like saying Firefly didn’t last too long. Should have been called “Mayfly”, amirite?

I pick a third specialty:  Let’s add “Feint” to Trick.

And my Signature Asset is my Whisper Firearm.

There’s rules for designing your own Distinctions, which are really… erm… what makes characters Distinct. Kind of like Feats, Ads/Disads, and Class Features all in one. That helps mitigate the fairly small range of numeric values and lack of any normal equipment rules. Equipment of all types is abstracted as an asset or signature asset, the difference being the latter is something you’ll almost always have access to, while the former is more transient. Money is also abstracted; you can have an asset like “D8 Daddy’s Credit Card” that you could add to an Influence roll to buy some plot-essential device, but you’ll never track your funds explicitly. Running out of money is a GM-provided Complication.

A lot of people like these abstract, story-based systems where the only mechanics that matter is “How important is this to the plot?” In such systems, “My Hand-Me-Down Pistol” might be a D8 Signature Asset with some Distinctions of its own, and a top-of-the-line military rifle wielded by a random NPC is just descriptive text or is wrapped up in a  “D6 Infantry Gear” asset alongside his ration pack and hiking boots. Not my style, but it’s also not my concern if it’s yours.