The Handbook of Traps And Tricks IV

Welcome, one and… one, probably…. to the fourth part of my exploration of the Handbook of Traps and Tricks by Dragon Tree! In the prior part, we looked at Illusions, Rays, and Poisons, and in this part, we look at… I dunno yet. I write these top to bottom, just turning pages and seeing what comes up. So, what’s coming up?

Me figuring out where the hell my book is, for one. I had to rearrange my desk to make room for my work monitor, since I’m doing real work now, finally, and the laptop screen was getting to be an actual impediment to productivity. So I had to move the shelf where I stored all my Old School Digest-Sized books. Lemme see… ah, got it.

“How To Trip Your Trap”. Ask Sir Clyde The Clumsy to walk across the floor? No, this is about making trap mechanisms more interesting.

It is noted that anything the GM spends too much time describing is likely suspect. (In much the same way that in a 42-minute police procedural, any personality trait whatsoever about the victim or a… erm… likely suspect… that warrants a mention is going to be a clue. If the victim collected model trains, the oil he used on the engines will have been laced with neurotoxin. If a suspect played basketball in college, he will have been able to lob the bomb through the window of the victim’s house from a distance. And if the GM uses more than one adjective to describe something, then, in the words of Admiral Ackbar, our cruisers can’t repel firepower of that magnitude!

The Trap Of Sinister Choice: The first suggestion is one of the most classic — torch sconces that can be pulled. The book recommends having such sconces in many places, so their appearance is not a giant red flag. Pulling one activates some trap; the other opens the door. This can be expanded in many ways, as anyone whose ever played a 90s-ish era CRPG can attest: Pull one, run to the other side of the dungeon, pull the other, this opens a previously hidden panel with three buttons, push the wrong one and everything shuts again, etc.

Don’t Knock The Lock: A giant padlock sealing a door. Any attempt to pick it results in an explosion. The trick? The actual lock, a much smaller one, is concealed behind the fake. The authors assert this is based on a real-life display they encountered, sans the explosives.

The Motion Is Tabled: First, place some loot out of reach — this of course requires a good knowledge of the PCs’ capabilities, and will usually work only at low level, these days. Second, make sure the room has perfectly plausible furnishings, such as a heavy wooden table and chairs in a context where they belong, perhaps the guards’ break-room. Third, when the table/chairs are moved, the trap is sprung. I must admit, this, and similar variants, are good ways to incorporate traps into the setting in a non-obvious way. (“Hey, Charlie. How come the employee manual says to never move the chairs in the break-room?” “Just follow the rules, Fred, and don’t ask dumb questions.”)

Shed A Little Light On The Subject: Candles, torches, lamps can be anything from dynamite to gas emitters. In modern games, though, it’s very rare for players to be starved for light and need to use such things if they find them. Only at very low levels, and only if you’re really tracking gear usage and how long a torch has been lit, and only if most of the party aren’t of a species with low-light vision/darkvision, will the players think, “Phew! Good thing this unlit torch was just sitting here!” This tactic worked better in older games, but still, mostly at low levels, unless the players were deprived of all their light-emitting magic items and spells somehow.

Tripwires and Trouble: As tripwires tend to be obvious, they can be avoided… but suppose the trap is triggered when you step on the space across from the wire, unless the wire has been pulled/triggered, which actually disarms the trap?

“…Not So Much Traps As Wonders…”

Not To Be Confused With Bolivar’s Beautiful Bowel, Because Ew

That’s not me being poetic, that’s the book. The following traps are “high magic”, and are, per the description, more “situations” than “traps”.

Pasquali’s Perfect Polish: A substance that creates a frictionless surface; even spider climb and the like will not avail you. If you’re moving when you enter it, you keep moving until you lose momentum, presumably from air friction. At that point, you’re stuck, unless you can create an action/reaction effect, such as firing an arrow west to propel yourself east. (But would the force of an arrow overcome the inertia of your mass? I guess with truly zero friction, it would, albeit sloooowwwwwlllly. Better hope you’ve got a lot of arrows.)

Harvey’s Fogs: I am guessing “Harvey” is an inside joke, creator credit, or obscure reference. This is a randomly colored fog, produced by a triggered trap, with a 1d8 table of effects. Effects range from blunting all sharp objects (the cleric w/the +2 mace mocks the fighter and his vorpal sword), to making everyone drunk, to stripping the entire party naked and leaving a blue ribbon tied around the endowment of the best-endowed. Exactly how that’s determined, I don’t know. Few games require that as a stat, and the only one I (unfortunately) know of shall not be named.

Bolivar’s Beautiful Bowl: This is a frictionless bowl, intended to be placed where PCs will slide into it. The more intelligent you are, the worse your save against the hypnotic effect of the interior, where you stand there and go “Oooohhh… dig the colors, man….”, making you incapable of assisting in your own rescue. (I wonder who cleans up the bones of the people who fall in alone…. or if they’re still there…)

Seriously, Are There Any Other Kind?

Continuing in the vein of “Not really traps, but kind of annoying”, we get to artifacts.

Almagon’s Amulet Of Alliteration, I Mean, Avarice: Not that I’m known to natter negatively about alliteration. This will make the wearer super-greedy, so that they’ll betray even their fellow PCs for a few extra coins. In other words, it has no effect on typical player behavior.

Klemper’s Knot of Knavery: See what I mean about alliteration? This causes the victim to be be compelled to lie or take 1d6 damage, but does grant them a high Charisma so their lies are believable. (In modern games, I’d grant a large bonus to Deception or the equivalent skill.) As the victim can only lie, they must multiclass to lawyer. (There is no fruit so low-hanging I will not pluck it.)

Poppa Top: Beneath the obfuscating verbiage, this is a soda/beer type pop-top can. Pulling the tab releases a powerful water elemental or similar creature, along with sufficient dimensionally compressed water to sustain it. So the party not only must fight a powerful monster they probably weren’t expecting, they must do so in a flooded room. I like this one. I will use some variant on it. 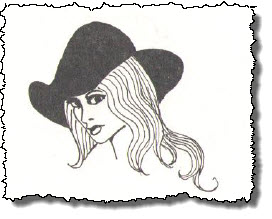 Shadow Hat: A grey or tan felt brimmed hat which grants a 50% chance to “cloud men’s minds”, that is, a bonus to stealth/hide. The wearer is also compelled to say “Who know what evil lurks in the hearts of men?” I know that sounds like one of my allegedly funny comments, but it’s actually in the text. Dammit, book, stop writing the jokes for me! (“Someone has to,” says the Peanut Gallery. “Shut up,” I reply. “No one even knows what a Peanut Gallery is any more.” “The display of Charles Schulz’ art at MOMA?” replies the Peanut Gallery.)

Amulet of Truth: Pretty much the opposite of the Knot of Knavery, this compels the wearer to always speak the truth, causing him to lose all class levels in lawyer. (Fruit, Low Hanging, 1 ea.) Put two people, each wearing one of the items, side by side, and you have the classic puzzle. It is not mentioned what might happen if someone wears both of them. I’d roll randomly to see which is dominant at intervals chosen by capricious whim.

Ungar’s Armor Polish: This will make your armor and weapons shiny and clean, while reducing bonuses/effectiveness by 2 : Permanently. But, hey, your formerly +1 sword (now a -1 sword) looks great! It occurs to me this could be used on old, rusted weapons to make them seem shiny and new, so they can be resold to suckers at a profit.

Cap’n Crunch’s Sea Chest: Seemingly a chest filled with treasure, when you reach inside, it will slam shut, doing 2d6 damage. It’s something like a mimic, except it’s a mutant clam, and thus, will always be a chest. Evidently, there are enough sunken ships and adventurers looting them in a typical D&D universe to make evolving to look like treasure a viable strategy. (I had a similar idea, but purely mechanical, published in Traps and Treachery by FFG, some of my earliest professional game writing.)

Wand of Many Wishes: A wand which grants wishes, but always perverts the wording to cause the most baleful effect possible. In other words, exactly how wishes always work in old-school D&D.

And So We Face The Final Curtain

Which Is Probably Some Kind of Drapery/Fabric Monster

99% Sure They Were In One Of the 2e Monster Books

The remainder is a bunch of random tables, always fun, which I will explore next time!