So, welcome back to the walkthrough of “Booty And The Beasts”, a highly unofficial supplement for “fantasy role-playing games”, by which we mean “Dungeons & Dragons”, published in 1979 by Fantasy Art Enterprises and featuring some of Erol Otus’ most classic early work. This time, we will look at the chapter on “Parasites”, which only makes sense, it being election season and all.

Let us begin with a song:
All things scabbed and ulcerous,
All pox both great and small.
Putrid, foul and gangrenous,
The Lord God made them all.
(Monty Python’s Flying Circus)

There is no denying this: Parasites are among the most squicky things on Earth, and many of them are far nastier than anything most game designers’ sick imaginations could come up with. I especially like the worm that eats a fish’s tongue, then attaches itself to the fish and become the tongue, so the fish can’t live without it. Whee, fun! Sadly, parasites in most RPG material are reduced to some abstraction of the disease rules or show up on page 74 of “The Complete Guide To Tavern Wenches” (Table 7-D, “Morning After Effects”) or are otherwise not considered in the category of “things to kill”.

Not so for Erol Otus, Paul Reiche III, and the gang at Fantasy Art Enterprises! Read on for more, and for one of (IMO) Erol’s best illustrations… and given the body of the man’s work, this is no small praise.

All things sick and cancerous, All evil great and small… 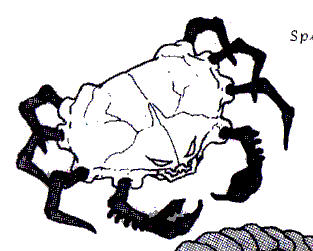 Fairly mundane, at least compared to some of the other critters here… this one sneaks into your body, then eats parts of your spine, then settles in to go nom nom nom on your nerve impulses, resulting in half dexterity while it’s there. If you remove it, though, you’re paralyzed, since there’s now a gap in your spine. There are so many ways around this for the kind of munchkins this product was aimed at, though, that it’s mostly a speed bump.

Mimic, shmimic. Continuing the common theme of “every single object in the universe, living or not, wants to kill you”, the item imposter looks like a magic item — a sword, a ring, an amulet, whatever. When you pick it up, it attaches itself to you, and then drains 1-6 points of Strength per day. It is immune to everything — “physical, magical, and technological attacks”, and the only way to get rid of it is to cut off the part of the body it’s attached to. Never, ever, ever, put on a crown, amulet, or circlet, that’s all I’ve got to say. (Oh, you can also cast an anti-magic spell on it, but where’s the fun in that?)

As a side note, a lot of these critters, including ones I’m not mentioning (even though they’re all cool!), are mostly lacking in mechanics for chance of infection, resistance, etc. Basically, the DM says “Sucks to be you, you’ve got spine crabs!”, and that’s that. Those of you who play wussier more modern roleplaying games, whether Dungeons &Dragons 4e or some OSR type product, might find this kind of highly adversarial approach to be odd, but it really was par for the course back then, at least for some large subset of gamers. The battle wasn’t the characters vs. the monsters… it was the players vs. the Dungeon Master, and Rules Mastery was the weapon of choice for all sides. There was often no assumption your character had any innate skills or competence; if you, the player, didn’t specify how you checked your boots for scorpions every morning, the DM was sure to rule you’d just been stung by one. Obviously, this kind of playstyle isn’t sustainable in the long run, which is why gaming evolved the way it did, but it has a certain charm all its own when looked back on from a safe temporal distance.

It’s the bathing suit/briefs on the guy with the crew cut that really sell this, you know?

Basically, if it hits you (and at 25 hit dice, it probably will), you take 1d6 damage and become docile (no save, no chance to resist… see above), doing nothing but eating and thus feeding the macrosite, which lacks all digestive organs of its own. With ten tentacles, it can easily ensnare an entire party if they’re not lucky. What a great ending for a campaign!

It burrows into you, then eats all your marrow so you can’t produce new blood cells, so you die. It can be removed surgically, a rarity for creatures in this chapter, but a far better option is to eat the wings of the butterly people, in another example of the wonky and wonderful “ecology” you often saw in books of this era, beginning, of course, with the man himself, E. Gary Gygax, who famously told us how bullettes like halflings and how blink dogs and displacer beasts are eternal foes.

These creatures infest the wombs of “large mammals”, including humans. They fertilize an egg and it grows to maturity in a few days, causing the woman to give birth to 1-100 more womb lice. If the female is already pregnant, they eat the fetus and replace it, so this is used as a method of abortion in some cultures. I swear to Ghod, that’s what the book says! 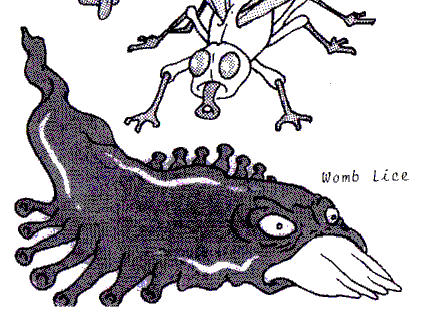 In space, no one can hear you rip off Ridley Scott.

Booty and the Beast was hardly the only late-1970s supplement to decide what D&D really needed was facehuggers. The link between “Saw it in a movie; wanna play it in a game” was always very strong, and all that’s changed in the last 30 years or so is that some writers have become just the tiniest bit better at filing down serial numbers. Tiny bit. Anyway, the Neila takes up over a full page of text, and it come from a universe “where morals are unknown and the only law is the law of survival”. I’m not sure if that’s some commentary on Hollywood in the 1970s, American culture in the 1970s, or if the writers just thought it was a cool phrase. Details are given on the four stages — egg, crab, worm, and humanoid — and, muhgawd, this is one nasty bastich, as you might expect. Other than as an egg, it dodges all attacks on an 11 or less, and it’s immune to heat, cold, sonic, electricity, poison, diseases, life drains, and vacuum. It saves vs.magic and technology on a 4 or better, and doesn’t take half damage. In humanoid form, it has 34 hit dice(!) and an AC of -8 (!!), and its bite does 9-54 damage and will tear out your heart — since this latter effect is seemingly automatic, I’m not sure what the damage number is for.

DM: “OK, the neila does (roll roll roll) 37 points of damage and rips out your heart.”

DM: “Dude, it ripped out your heart!”

DM: (Grabs a copy of his first printing, first edition, AD&D DMG hardcover and whacks the player with it). “It says so RIGHT HERE!” (Wham wham wham)