Yes, From The Commercial

What Do You Mean, “What Commercial”?

Get Off My Interwebz, You Damn Punk Kids!

Will you follow me into fire? Into storm? Into darkness? Into death? Into many-tailed giant armadillos? Into killer potatoes? Into telepathic blue panthers? Into, in other words, the further depths of All The World’s Monsters, Volume 2?

Scourgetail: A gorilla-sized armadillo with six tails that, for some reason, breathes lightning (as an attack), disdains magic, and might be armed with technological items.

Scrubbing Bubble: OK, so let’s get this out of the way. This commercial was played incessantly in the time period when All The World’s Monsters was being compiled and created.

Seriously. They Were Smoking Some Primo Stuff Back in the 70s.

They mostly stay in hiding, except when the object they are charged with maintaining has become dirty. Then they swarm out to clean the item, and attack anything dirty or filthy in the vicinity… you know, like PCs.

Scrubble: A giant, insane scrubbing bubble. Do you need to know more? No, I didn’t think so.

Sheem Battle Spider: I know these were mentioned in the writeup of something else, but I am far too lazy to go and look right now. Anyway, giant mechanical spiders with assorted weapons. They come in six “Marks”, that is, Mark I Sheem Battle Spider, Mark II Sheem Battle Spider, and so on, with appropriately varying hit dice, weapon damage, and attacks/round. The casual blending of sci-fi and fantasy tropes is one of the hallmarks of old school, so it’s always funny to hear gamers 20 years younger than me whine the lack of genre purity in “new” games. Dude/Dudette… haul out your copy of “Blackmoor” and check out the treasure lists for “Temple Of The Frog”. Oh, wait. You don’t have “Blackmoor”. Because you’re a damn punk kid that doesn’t know shit about old school gaming except what you read on the Internet. Now, let me just adjust my belt onion, and I’ll go yell at some clouds.

Smoke Creature: A creature of pure, living smoke that is commonly found on not-so-deserted islands where it acts mysterious and inexplicable until the last season, where it’s revealed to be… uh… did we ever get and real closure on that? God damn it, Nolan, if you pull that same shit on Westworld, by my pretty pink bonnet, I will end you. Huh? What? Yes, there really is a “smoke creature” in the book. It strangles you. With smoke. Next!

Sparkflail: A rhino-sized warthog with a tentacle instead of a nose. Said tentacle can either drain 1-4 levels(!) or do 8d6 lightning damage. I’m sure, by now, you can guess who created it. Here’s a hint: Rhymes with “Shmint Shmigglestone”.

Stardust Potato: If I just transcribed it, you wouldn’t believe it.

Swamp Thing: As per the comic book, from the Len Wein/Berni Wrightson days. So, no psychedelic fruit as treasure, no profound ecological messages, just a… swamp thing. A muck encrusted mockery of a man. Interestingly, the shambling mound of AD&D strongly resembles the Man-Thing from Marvel, which was created roughly concurrently with DC’s Swamp Thing.

Timewasp: A giant wasp which can cast “Timestop” three times a day. It paralyzes dragons and lays its eggs in them. I’m not entirely sure how much the “timestop” really adds to the concept, except for making it a bit more deadly, but I guess they felt “giant wasp” was already done, so, this is a giant wasp that stops time. Works for me!

Trimouth: A horse-sized three-headed dog with mithril fur and Vulcan logic and you already know who came up with it, right?

Ugly: Every chaotic evil magic user’s hunchbacked assistant. Seriously. It comes in three sizes (3’2, 5’1, and 7’9), is always hunchbacked, and has a 50% chance of getting any order wrong. (“Abby… someone.”) It will act as a sixth level thief/fifth level assassin. It’s not clear if this is actually a race, or just a way to represent a common archetype in the absence of gaming systems that would allow them to be “built” as a human with a certain set of skills and abilities.

Vader: Given that this is the late 1970s, the creators are all big geeks, and the book is full of things borrowed from the sci-fi and fantasy of the era, I hardly have to tell you that a Vader is a blue-furred telepathic panther with two antennae that can transmute its body into any element it has had contact with, right? Didn’t think so. Kind of obvious from the name, really.

Wafflebanger: There are no words. But there is a screenshot. 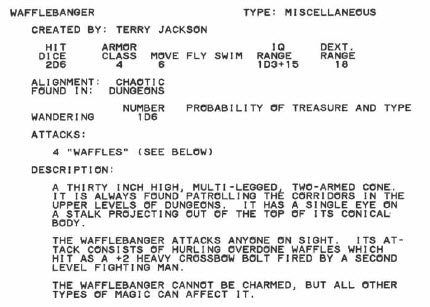 Clearly Conceived After One Too Many Wallbangers

Wall Of Darkness: I’m not really sure what to say about this. It’s a wall of darkness which fills the corridor, is 1′ to 30′ thick “depending on age” (though no rules for age are given), and it kills/destroys everything it touches. It’s immune to all damage. It can, barely, be the subject of charm monster, though there’s so many caveats and drawbacks it’s hardly worth it. It has an armor class of -26(!) and 8,575 hit points, at a time when greater gods capped out at 300 or so… not that AC and HP mean anything when the creature is effectively beyond harm. It’s hard to figure out the real purpose of this… a puzzle for players to overcome? There aren’t many obvious solutions beyond “teleport around it”, and that’s so obvious it’s not much of a puzzle…  either you have access to teleport, or you don’t. In effect, it’s not really a monster, it’s a plot device, stripped from whatever plot is was originally part of.

Wandering Minstrel Eye: A completely harmless (no attacks at all, no special effects, no reactions to being attacked) giant eyeball which announces its presence by singing “A wandering minstrel eye”. Yes, really.

Wandering Monster Eye: Identical to the wandering minstrel eye, except that it can do a whopping 1d8 damage with its whip-like tail (optic nerve, I guess). Clearly, it’s intended to confuse players so they don’t know which they’re encountering. Unfortunately, since there’s no downside to attacking the harmless one (thought it is considered “bad form” and “chaotic” to do so, all that means in practice is that the Paladin can’t strike the first blow), and the “dangerous” one isn’t particularly deadly or interesting, the players will simply slaughter any singing eyeballs they encounter, with no consequences for this behavior. (Compare to the gas spore/beholder problem, where attacking a gas spore recklessly is dangerous, and, likewise, treating a beholder as if it were a much-less-deadly gas spore is also dangerous. For “trick” monsters to work, there have to be risks to an incorrect identification of either. (Hitting a gas spore with the kind of alpha strike you’d use on a beholder is a huge waste of resources, but wasting a melee round to “size up” a beholder in case it’s a gas spore effectively gives it an extra round of life, during which it can do all manner of things.)

Whoosh: Onomatopoeia monster for the win! (How many articles did you read this week that used “onomatopoeia”? Not many, I warrant! It’s a 60 lb crab that whooshes from the surf onto the shore, attacks, and then whooshes back again. A surprisingly sane creation from the prolific Mr. Bigglestone, as it’s not a crab/dachshund hybrid with a manticore’s tail that shoots spikes made of frozen starlight, or something. (My spell checker suggests “romantic’s” for “manticore’s”. Make of that what you will.)

Yellow Door Creature: Far less perverse than its cousin, the green door creature, this is yet another “monster” whose main purpose is to deprive PCs of magical resources, and which would be better represented as a trap/dungeon feature than as a “monster”. The mechanics of it are rather complex; here you go:

“The Following Things Are Immune, Unless They’re Not”

An observation: While the books are full of things borrowed (with or without attribution) from the SF media of the day, it is overwhelmingly from books, with a smaller portion from comics, and few, if any, from movies and TV. This says a lot about the makeup of gamers of the time. This may surprise modern folks, but back in the 70s, TV and film sci-fi was not held in high regard by “real” SF fans, and comic books were poor cousins, at best. As RPGs grew their own culture, splitting off from historical wargaming, the social pool it drew from was SF fandom, a strongly literature-oriented group. “Star Trek” caused a massive surge in media SF fandom, and ultimately changed the overall makeup of the culture. While in the late 1970s, the tidal surge was already sweeping fandom as a whole, these books, and gaming fandom in general, was made up of people who were more hard-core and who started in fandom several years earlier, thus being somewhat behind that curve.

You can learn a lot about a culture by studying its tentacled warthogs.

So, that’s it for Volume 2. I may or may not proceed directly to Volume 3, whether or not I pass “Go” or collect $200.00. I’ve got a multitude of other projects burbling, some online, some not. We’ll see.