Roll up, roll up, for the mystery tour! Beyond these walls… erm… words… lies the fourth part of an exploration of the second volume of All The World’s Monsters, a classic of the Burgess Shale era of gaming, full of wonder, majesty, awe, genius, and madness, in non-equal portions! The prior part is here, and the start of the whole mess is here, and I’m pretty sure they’re all tagged “All The World’s Monsters” for easy finding. Then again, given my generally lazy and slapdash approach to things, they might not be all tagged. Anyway, on to the show!

Magebane: Yet one more monster that exists, primarily, to deprive players of resources. The magebane is a silvery blob that eats spell points when it’s attacked with magic — you roll percentage dice and that’s the percentage of the caster’s total spell points that are absorbed, with the creature gaining hit points on a 1-to-1 basis. Despite the obvious audience of the book being D&D/AD&D players, who didn’t use the spell point system preferred by the west coast gamers who produced ATWM, no conversion is given. Old School! As the magebane is not particularly deadly or threatening in itself, after a single encounter with one, the casters will hang back and let the meatshields deal with it. But, hmm… what if a magebane and a rust monster were merged, due to the experiments of a mad wizard? (In D&D-land, Charles Darwin’s contribution to human knowledge was “On The Origin Of Species By The Means Of Unnatural Magics”.)

Magic Absorber, First Class: Yet one more monster that exists, primarily, to deprive… players of… hey, are you getting a feeling of deja vu? There’s no “Magic Absorber, Second Class”, listed here, by the way. This one is a colored globe of light with its own unique mechanics to determine how it screws over the players. It likewise gets bigger and nastier as it eats magic, until it finally explodes.

Melter: An elephant sized merger of crab and hog that breathes acid and can use “Mass Charm” three times a day. To the surprise of no one reading this series, we can thank Clint Bigglestone, surely one of gaming’s unsung mad geniuses, for this. I honestly must wonder if Mr. Bigglestone’s brilliantly insane creations were fully formed in his imagination, or if he had the most amazing set of random tables ever known to humankind, and he simply “let the dice fall where they may” and submitted them. (Kind of like building an entire comic-book universe by using the Marvel Super Heroes “Ultimate Power Book” tables.)

Mobile Dis Swarm: This creature is a swarm of “quarter inch long stomachs with half inch fangs”. It simply engulfs and eats everything in its path. While that’s pretty par for the course in ATWM (which tells you a lot about the course, I wager), I noticed that it’s only injured by cold, heat, or “a special chemical called ‘Mobile Dis Salt'”. The frak? There has to be a story/pun/reference/something there I’m not getting. Something specific to the creator’s campaign, or something that was a common cultural touchpoint among some subset of late 70s gamers?

Off They Go, To Harvest Elves For Their Flesh. Mmmm… Elf Honey.

Naral: A “carniverous” (sic) 10 foot long bee, favored by “the people of the City of Chaos” because it makes a “stable riding platform”. Wouldn’t the people of the City of Chaos favor an unstable riding platform? In a perfect example of what some call “Gygaxian Naturalism”, it favors elf flesh. And now it occurs to me that, if it’s a meat-eating bee that lives in a huge honeycomb… and it is, and it does… then the “honey” must be made from flesh, not pollen or nectar. That’s, uh… an interesting concept. Wait, the “honeycomb” of bees is made from wax produced from the sugars they eat. Now, I think you can render animal fat into wax, or something, so I guess that works… but, wow, there’s a definitely horrific image of what a naral’s lair must look and smell like…

Nazgul: As promised. These Nazgul can be turned by Patriarchs, which is what they used to call “clerics of 7th level or higher” in Original D&D. (There was a thankfully brief trend in the 70’s to refer to NPCs by their “level name”, not by their class and level, so you’d encounter “two heroes and a theurgist” or the like. Nazgul drain 1d6 life levels per attack, or 1d3 if you save. That could destroy a party in 1 or 2 melee rounds, easily.

Ondoculus: This falls into the “I can’t write it, you have to read it” category. 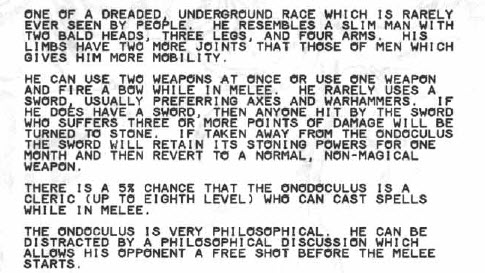 “Quick, Ask Him About The Is-Ought Problem!”

Back in the “G”s, there is the “golcodulus”, a pet of the ondoculi. (That is the plural, yes.) 1d6 of them accompany each ondoculus. Thought you’d like to know this.

Poison Ivy Hedge: A mobile (why not?) hedge made of poison ivy. Because if the ceiling (lurker above), the floor (trapper), the walls (stunjelly) and the furniture (mimics, among others) are going to kill you, why not the freakin’ topiary? The poison it excretes causes severe itching, resulting in a -2 to attack rolls for two hours, and there is no saving throw. The treasure is “contained within itself”, so I expect this turned a minor encounter with a walking garden decoration into an hour long session of arguing with the DM over how you were going to get the treasure without exposing yourself to the poison, and the DM telling you how your plan wasn’t going to work, because we had “rulings, not rules” back then, and everyone was totally reasonable all the time and agreed on what “common sense” meant.

Raw’Yas: An ant-sized robot that follows other creatures around for when they (the other creatures) attack “anti-technos”, i.e., wizards. They “attack” by activating any technological devices in the area and directing them against the victims. They really don’t have any other stats to speak of. They appear in swarms of several hundred and have 1 hit point each, so (given the absence of generic ‘swarm’ rules in the era), you pretty much had to fireball the swarm to get them to stop… erm… using their “electric charm” on the other machines, which of course were always there to be charmed. This creature seems like it was created as part of a specific setting or adventure and then added to the book because, hey, it says “all” the world’s monsters, not “most of” the world’s monsters.

Rustlance: A rust monster that’s a snake. Yeah, that’s about it. It attacks with a horn for “4d8 plus rusting”. Since no rules are given, “use the rust monster rules” is heavily implied. Why not just use a rust monster? Because once players have encountered one, they’ll keep the meat shields away… see my comments on the magebane and the magic absorber, above. “Player skill, not character skill” meant “remember whatever killed your last character and have your new character react appropriately to it, despite having never encountered it before”.