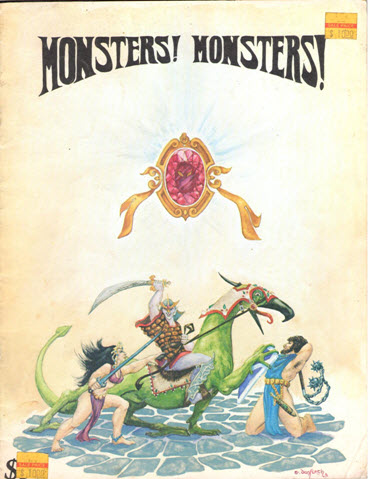 teen years or so before “Vampire”, and a mere two years after “Brown Box” OD&D, Metagaming published “Monsters! Monsters!”, the game where you play the monsters! Monsters!, I mean, the monster. But instead of being all about angsting and whining and engaging in salubration to contrajoin the aessence of filligression so as to subliminate the pandesire or whatever crap all those 90s games were filled with, this game comes complete with a sample tavern for your characters to pillage and burn.

My deep, personal, meaningful connection with this game is… erm… I found it in my collection last night while looking for my copy of Villains and Vigilantes 1e, which I didn’t find. It has a sticker indicating I bought it for 10 dollars on sale. Odds are, it was at a tiny weird art supply shop in North Carolina, which also sold RPGS. A lot of my very small press games were found there.

So, let’s get on with this, shall we?

I think it’s telling of the era that the chargen rules suggest a 3×5 card for your character, not a 10 page active-form PDF. Well, I mean, other than that no one at the time would know what a “PDF” was. Unless it was some military jargon, like “Portable Detonation Flange”, as 1976 was still within the era when RPGs were considered a sub-genre within wargaming, leading to confusion when someone assumed an “RPG session” involved either shoulder-mounted weapons or horribly baroque programming languages. But I digress.

I draw a playing card to randomly pick a monster: Queen of Hearts. That means I’m a lamia.(Snake-woman, which, as the game notes, is more like an Indian naga than a Greek lamia, but Gygaxian mythology mangling has redefined monsters as much as Kirby changed Thor’s hair color and hirsuteness.)

You may be seeing why I don’t like random stat rolls, if you look back at others in this series. But I do get to adjust these by monster type. When I’m done:

Combat Adds: 3. This is due to my craptacular Dex and Luck dragging down my high Strength.
Languages: Lamia, Common, and Dragon. (I get Lamia for free, and can pick two more. Common so I can seduce and/or terrorize humans, dragon so I can talk to dragons, which is always useful.)

And hey, that’s it! I don’t even have to buy equipment; it’s assumed monsters start with appropriate gear, so I’ll get a bow and a longsword, and maybe a chain shirt for my upper body. And we’re done! Dolly Lamia, everyone!