(And Witch Hunters, Which Don’t Start With ‘M’)

“Y’know, being a Paladin is cool and all, but I wish there was a class that let me be even more of a douchenozzle to the other players, and justify it by saying ‘I’m just playing my character!'” (Some Gamer, At Some Point In the 1970s)

Well, to be fair, that exact quote was probably never said, because ‘douchenozzle’ is much more modern slang. But if Downton Abbey can use ‘step on it’, I deserve the same leeway. 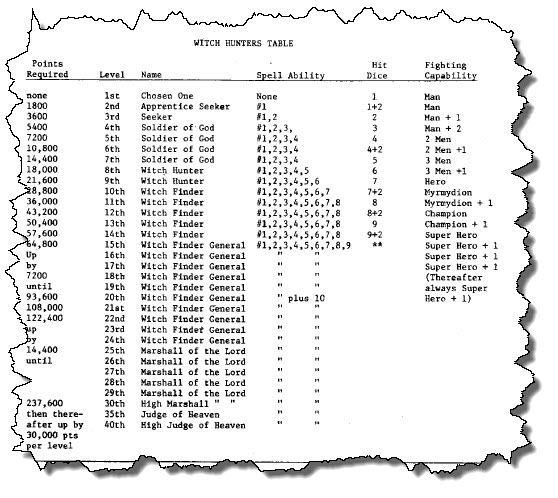 Hey, These Guys Only Go To 40th Level!

BTW, my wife is a distant descendant of Cotton Mather. Yeah, that Cotton Mather. (These days, given the raimant of the televangelists, he’d be Polyester Mather, or something.)

We then get to a price list. I won’t be scanning it or going on in great detail, but there’s a few cool things to note.

Now, in two pages of teeny-tiny type, we have “Magic In Arduin” and “Even More Magic In Arduin”. Seriously, that’s how the text is broken up — not “Basic Rules” and “Advanced Rules”, or “Standard” and “Optional”. But, hey, it works!

It begins: “In fantasy wargaming there has been continual argument about magic and how it is supposed to work.” (Cross out ‘magic’ and write in ‘everything’ and you’ll be just as correct.) It then notes that the rules presented here are “a based(sic) from which to work”, and that magic is “limited only by the reader’s imagination” (and how much Chinese food he bought the DM.)

It always takes an hour to memorize all the spells of a given level, so if you can memorize 6 spells of that level, you spend 10 minutes per spell. This also means that if you know a lot of spell levels… and in Arduin, they go up to 11… actually, up to 30(!), you could easily spend most of the day memorizing.

Scrolls can only be used every other turn, due to the time needed to take them out, read them, etc. It ought to be noted here that while standard D&D rounds at the time were a minute long(!), Arduin used the six second round, which became standard with D&D 3.0. once more, well ahead of their time.

Also, if the mage is disturbed, his concentration will be broken, which could cause a backfire. There’s a lot of underlines in this text.

Also, in ALL CAPS IN THE ORIGINAL, is THIS NOTE:

MAGIC SHOULD NOT BE ALLOWED IN CLOSE COMBAT SITUATIONS WITHOUT HEAVY PERCENTAGES OF CHANCE THAT EVEN FRIENDS WILL BE HIT. (All underlines also in original.)

The exact “heavy percentages of chance”, of course, are left up to the DM to decide. I begin with 100%, -10% for each potsticker or egg roll tossed my way.

It might seem, to a modern reader, that keeping track of which spells a magic-user cast on which orc over the span of many games would be tedious. Let me assure you, however, that no orc ever survived a single encounter, so there was no need to worry that you might run into that same orc again. Within the bounds of one combat, however, the “save always/fail always” rule offers some interesting possibilities, forcing a magic user to not simply spam the same spell over and over — or perhaps encouraging this, if the target failed. It adds an interesting tactical touch… and, for the umpteenth time, I note this mechanic appears, in a modified form, in many spells and special abilities in modern D&D, esp. fear effects, where, once you make your save, you can’t be affected again by the same effect for a 24 hour period. It’s not a universal rule, but it’s a common modifier. Hargrave’s design instincts were very solid, even if the execution evinced an excess of enthusiasm over editing. (And my check from the American Alliteration Association is on its way! Ka-ching!)

The same rule applies to detecting magic — if you fail, you can’t try again for another level. (And in the modern age, Knowledge checks likewise need a level to try again… ).

Wands, amulets, rings, etc., require conscious and conspicuous action to activate. Rings, in particular, must be turned — pity if the fighter is wearing his ring of flight under his armored gauntlet, the text notes with the sinister and sadistic glee only someone who has endured too much behind the screen can muster. This activity will be noticed and enemies will take appropriate action.

“You have to have your magical goodies where your hot little hands can get them at an instant’s notice.” And if you don’t? Well, that’s where the “PHUMBLE PHACTOR” (sic) kicks in! The “P&P” (no, I don’t know what the “&” is for, maybe to avoid the childish giggles that would invariably emerge if the DM said “Roll your PP!”) is a chance — 50%, -2% per level, +/-5% for each point of Dex over 12 or less than 9, of grabbing the wrong end of your wand (that’s not a euphemism), selecting the wrong scroll, etc. (Me, I’d mandate this roll only if the caster was in a particularly stressful situation, or was partially blind, or otherwise not operating at presumably normal efficiency. Other DMs might be much less forgiving, usually with good reason.)

Next up, we have yet another piece of “design prescience” — the invention of, in effect, Touch AC!

“Another area that is seldom explored in fantasy gaming is what constitutes a “hit” when the weapon you’ve lobbed only has to touch it to work?”

For example, if you’re using a stasis compacted green slime grenade… yes, I said “stasis compacted green slime grenade”, it’s right there in the example… yeah, that is totally awesome, isn’t it?… you get a +4 bonus to attack, while, if using a cattle prod (yes, cattle prod), you only get a +2, since you must still close and attack. Makes sense to me!

Finally… at the very end of the magic rules… we get to the “manna” rules, around which, it is noted, “some controversy has… revolved”. You multiply intelligence by level, then divide by 4 if Int is 8 or less, by 3 if it Int is 9-12, and by two if it’s 13 or greater. This is generated per 12 hours of rest, and it’s noted that if you run out of manna before you run out of spells memorized, those memorized spells are “just empty words”. You can also choose to underpower spells — spending 2.5 points to cast a 5 point spells casts at ‘half power’, which seems like a great opportunity for cunning players to find spells that don’t lend themselves to being ‘halved’… and cunning DMs to find a way to make the bastards pay for thinking they can outsmart him. (“Well, I only need to be invisible for a few rounds, I’ll just cast it at one-third power so it only lasts as long as I need.” “OK, you turn one-third invisible. Your torso is missing, but the rest of you can be plainly seen.”)

Dave ends the section with:

“There are many more subjects I could cover, but this supplement is meant to get all you gamers to see that the sky is the limit and that no single person, publisher, or organization can have all the answers.”

1)“One who cannot sleep at night for fear someone, somewhere, is enjoying themselves.”