It’s amazing what you can find while trolling about the intert00bz. For example, I found a copy of “Astonishing”, issue 3, published by Marvel (during their “Atlas” years) in 1951, in which Marvel Boy, a fourth-tier hero, battled the scourges of Islam.

You can read all about Marvel Boy on wikipedia or something; let’s just go with what I got from this issue, which is that Our Hero works for an insurance company in his secret identity and at least some of his cases involve tracking down those sorts of vile, contemptible, criminals who actually expect insurance companies to pay money. No, this isn’t ironic. No, Marvel Boy isn’t like Mr. Incredible, secretly helping customers. No, he’s a total stooge for THE MAN. Fascist!

(When he returned in the 1970s, he was busy tossing bankers off of rooftops in the name of God. Seriously. I am not making this up.)

Anyway, our hero goes about investigating an evil cult that’s killing people for their insurance money. Naturally, this is a totally made-up pseudo-faith that will not offend, insult, or embarrass any actual people… 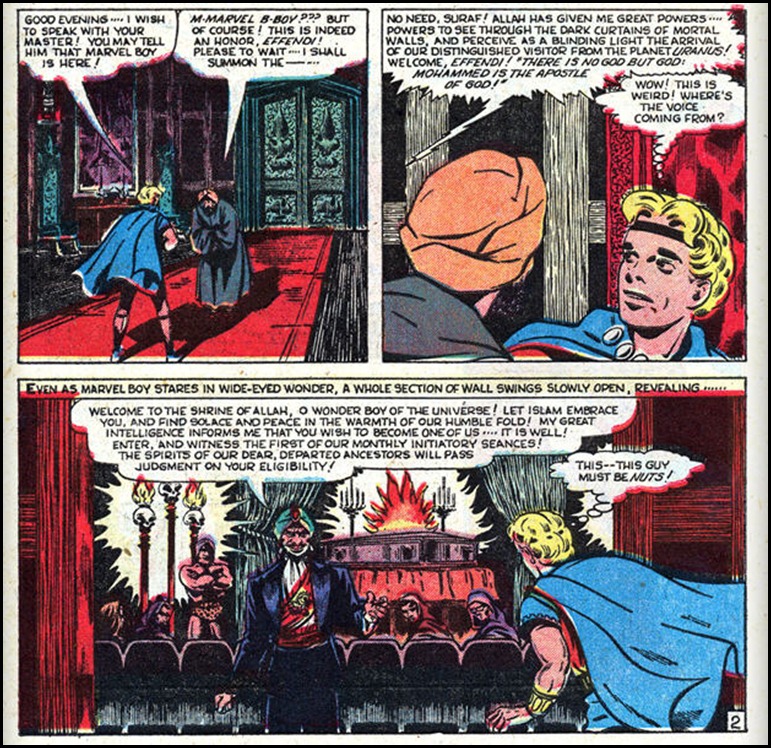 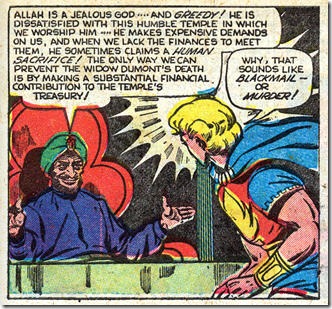 You know, I figure Glenn Beck and Michelle Malkin get most of their ideas on Islam from things like this. 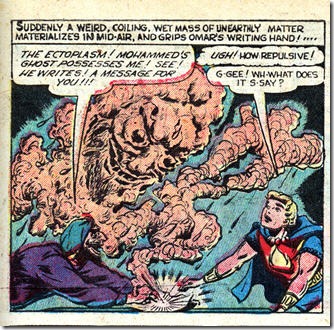 Apparently, Muslims in 1951 didn’t read comic books (or were a lot more aware of how silly it would look if they got upset over nothing), so no one was threatened with beheading for this image of Mohammed. Are you listening to me, South Park? Publishers in the 1950s had bigger balls than you! (Well, except when it came to knuckling under to McCarthy. And to the Comics Code. And to darn near everything else. Unless we’re talking about EC, which took on the most sacred cows of the 1950s with courage that most media publishers today never show when it comes to equally controversial issues. But I digress.)

Anyway, it all ends with the evil Omar being caught and arrested. At no point does anyone make a speech about how Islam is a legitimate faith being perverted by a con artist and at no point does an unbelievably perfect, noble, and infallible Muslim show up to provide “balance” and a “positive role model”.

Today, of course, whenever the comics need an Evil Religious Figure, they just make up something. No published in the modern age would use an identifiable modern faith as the basis for their villain’s schemes. 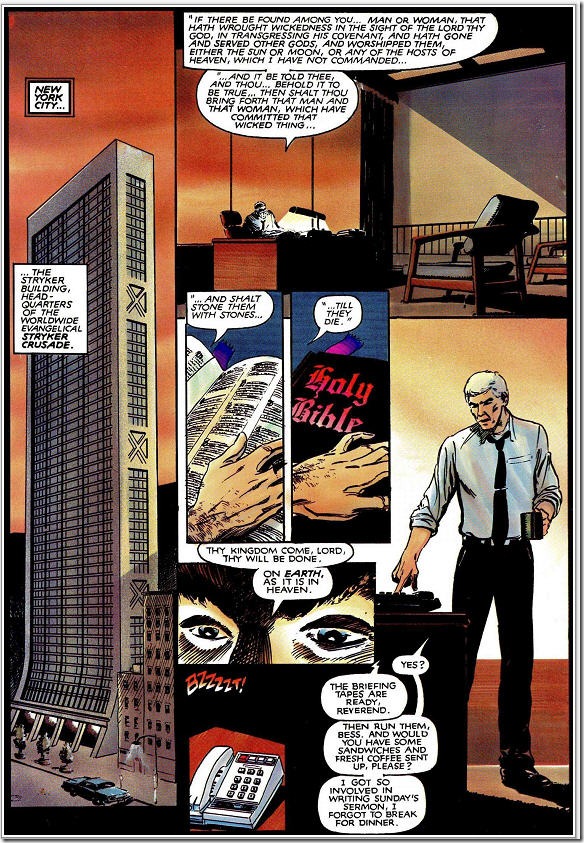 Or, you know, maybe they would…