Because It’s Halloween. And I Was “Inspired”. 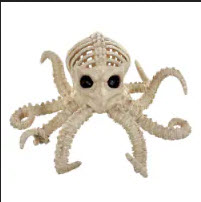 I Got Your Anatomic Implausibility Right Here, Pal

Numerous versions of the image to the left (or wherever your browser renders it) have been floating around the net, particularly on the several “Let’s make fun of bad science” groups I am a member of. (I am not a scientist, nor do I play one on TV (and let me assure you, that reference is actually older than I am, albeit only just), but I used to aspire to it (then, in college, I discovered science involved ‘facts’ and ‘work’ and ‘math’, while English Lit. involved ‘skimming the book an hour before the midterm and filling up the little blue books with whatever BS you knew the teacher wanted to hear’), so, I know just enough science to enjoy seeing people even more ignorant than myself being mocked. Yes, of course this is simply a way to make myself feel superior and momentarily suppress my constant self-loathing and feelings of inferiority.)

Ridiculous or not, it’s hardly any less ridiculous than owlbears, beholders, gelatinous cubes, et al, and given a sufficient number of mad wizards and a sufficient period of time, anything is possible. This is why the fantasy version of Charles Darwin penned his heretical tome, “On the Origin of Species by Means of Magical Experimentation, or the Preservation of Awesome-Sounding Hybrids in the Struggle for Experience Points”.

So, without further ado (or adon’t, as Kermit once said), the Octoskeleton!

“One canst, of course, animate the kraken and its kin as shambling zombies, but they canst be made not into ossuary warriors!”, spoke Aberegius of the Seventh Tomb, a necromancer of well-earned repute.

“So thou claim. Holdeth mine ale and watch this,” replied Williamus Robertus, Necromantic Adept of the Rubrum Collum, a man whose repute was also well earned, although of a different nature.

The creation of an octoskeleton involves bones from several creatures, mostly vertebrates of roughly horse or ogre size, and at least a pound of freshly mashed octopus brains (no more than a day old). A cleric or magic-user of at least 6th level must cast animate dead, and creating one octoskeleton consumes 6HD of total undead created (so an 8th level caster could make one octoskeleton and two normal 1-HD skeletons).

In combat, the monster attacks solely with its tentacles; it lacks the biting beak of a true octopus. Each tentacle that hits will constrict on the following turn, automatically doing double (2-6) damage. It may also hinder the targets movement, as follows:

Keen readers will note this is similar, though not identical, to the mechanics of the giant octopus. The octoskeleton is somewhat smaller and thus less likely to impede movement, though it is still quite effective, especially if a caster is foolish enough to get within reach.

A tentacle can be severed by dealing 8 points of damage with an edged weapon (sword, axe, etc., not spears or maces). This does not count against the creature’s normal hit points. The octoskeleton will never retreat no matter how many tentacles are shattered. However, if all tentacles are destroyed, it is effectively harmless and can be killed easily in one melee round with no roll needed.

Escaping from a tentacle requires a bend bars/lift gates roll. This is the only action the trapped character can take in a round, unless they have a strength of 18 or more, in which case, if the attempt to free themselves is successful, they may act normally. If it fails, though, sucks to be them. This is particularly true if the low-strength magic-user or thief manages to break free with a lucky roll, while the fighter or barbarian rolls poorly. Jeering and mockery in such a case is permitted, except for paladins, who are stick-in-the-muds and will scold their comrades for laughing at an ally’s misfortune. During the fight. Instead of, you know, attacking. Because, paladin.

Octoskeletons take half damage from sharp/edged weapons (note this makes severing tentacles difficult) and are immune to any sort of enchantment or illusion spell, as well as to magical cold. They take 1-4 damage from a vial of holy water — please note that underwater, the vial must be opened and pressed directly against the target to have effect1.

Octoskeletons move very quickly in water, but are no slouches on land and suffer no penalties for being in a dry environment. They have no treasure of their own, but are often placed to guard it. Like all mindless undead, they obey their orders unto un-undeath; usually this restricts them to a specific region or patrol area.

Clerics and paladins may affect octoskeletons as per wights.

Octoskeletons are sometimes created by necromancers who have a somewhat grisly sense of humor (“And be that you mean ‘necromancers'”), a lot of “spare parts” on hand, and easy access to fresh octopus brains, a key component to the ritual. They have some similarities to giant ocotopi, which they mimic, but obviously cannot compress themselves, jet through the water, etc., being rather solid. Their tentacles (sometimes called “spinicles” or “tentabrae”) are the spinal columns of large vertebrates, and their central body/head is formed of flat bones like shoulder blades, arranged over a network of curved ribs.

As their “arms” are made of hard, sharp bone instead of smooth muscle, they slash when attacking, and pierce the skin when squeezing.

Octoskeletons are often used as guardians, and they are efficient at stopping creatures getting past them, being able to grab them as they run by, then drop one and grab another, via their octo-pied territory reaction. (Note that octo-pied territory triggers only on a move action, not a manipulate action.)

Attack of Opportunity [reaction] Requirements: The octoskeleton must have nothing grabbed, but can Release any grabbed creature as part of this reaction. Note that its melee strike includes a grab.

Octo-pied Territory [reaction] The octoskeleton gains one extra reaction which it can only use for this. Trigger: A creature performs a move action within the octoskeleton’s reach. Requirements: As for Attack of Opportunity.

Melee [one-action] tentacle +17 (agile, reach 10 feet), Damage 2d6+8 slashing plus Grab
Constrict [one-action] 1d6+8 piercing
Writhing Spines[two-actions] The octoskeleton makes up to four Strikes with different tentacles, each against a different target. Each attack counts separately for the octoskeleton’s multiple attack penalty, but the penalty doesn’t increase until the octoskeleton has made all the attacks. If the octoskeleton subsequently uses the Grab action, it can Grab any number of creatures hit by writhing spines.

1: I just realized that the DMG has no rules for drinking potions or tossing flasks of acid, etc., when underwater. Before someone shrieks “Rulings not rules! Things were simpler then!”, please note the DMG does have a large paragraph, about 120 words, for determining if tossed food would distract pursuing animals. I must also note I spent a lot more AD&D time underwater than I did being chased by wolves, and I daresay that’s true for most players during that time.