For details on how and why this beast came to be, please read Dragons and Dungeons.

Violet Dragons are curious and strange beasts, possibly a form of elemental dragon. They are extremely rare, and are sometimes confused with Purple Dragons, though there is, in fact, no relation. They are, as one might expect, a deep violet in hue, with the tone deepening and darkening with age, from an almost lavender shade as wyrmlings to a deep, dark, color, nearing black, for an elder wyrm. They are distinguished by the single row of sharp ridged plates which line their back, plates which crackle with energy even when the Violet Dragon is at rest, which is not often.

Violet Dragons are extremely active. While most dragons are content to sit in their lairs and count their coins, venturing out only occasionally to hunt, terrorize, or command, Violet Dragons will venture forth daily. A few have no lairs at all, but roam the world, demanding and then destroying tribute from whatever areas of civilization they pass. The breath of a violet dragon destroys magic, and once an item has been rendered inert by this beast’s exhalations, it can devour the essence of it. Unlike some creatures, such as rust monsters, there is no residuum storage within the dragon; whatever process it uses leaves nothing behind. Thus, Violet Dragons are seen as a true test of courage for would-be dragon slayers, as those who face it risk more than their lives — they risk their magic items! (In a world where Raise Dead scrolls are cheap and +5 swords are not, property is indeed worth more than life itself!)

Violet Dragons love battle and will not shy away from it. They will use their breath weapon when it can cover many foes — unless hard pressed, it will never breathe unless two or more enemies are in range. They will usually follow by spending an Action Point to use Draconic Fury on the nearest target. They will then follow with Frightful Presence and withdraw, usually skyward, and then begin raining down Plasma Gouts until their breath weapon recharges. When bloodied, they will either use their Bloodied Phasing to damage as many foes as possible (usually with a double move, if necessary a triple move via spending an action point) if they think they are likely to win, or they will retreat if they seem certain to lose. (Consider the egos of dragons when making this judgment; a dragon will not admit to “certain” defeat unless he is very, very, outclassed.) With an action point and a run, they can move 36 squares while phasing — this is almost always sufficient to escape pursuit.

The breath of a Violet Dragon is a cloud of electrified plasma. It is not certain why this searing vapor has the effect it does on magic. Several sages, over the years, have tried to capture or deal with Violet Dragons to perform experiments; let us simply say these attempts did not end well, and move on.

In personality, Violet Dragons are frenetic, active, and easily bored, and their usual remedy for boredom is random violence. They are legendarily untrustworthy, though, in their minds, they are not so much treacherous as mercurial — “I changed my mind” or “I decided that was too boring” is a perfectly good reason to renege on a promise or ignore their side of an agreement. Keeping a Violet Dragon amused and focused is a difficult task, as something they found interesting a minute ago may suddenly become tedious. They adopt and abandon obsessions at random. In conversation, they will stop in the middle of one discussion and begin another with a different person, or simply decide that it’s time to stop talking and start killing. Overlaying all of this is a delight in pain, misery, and especially destruction; a Violet Dragon derives great pleasure from the sight of burning cities and charred farmland. 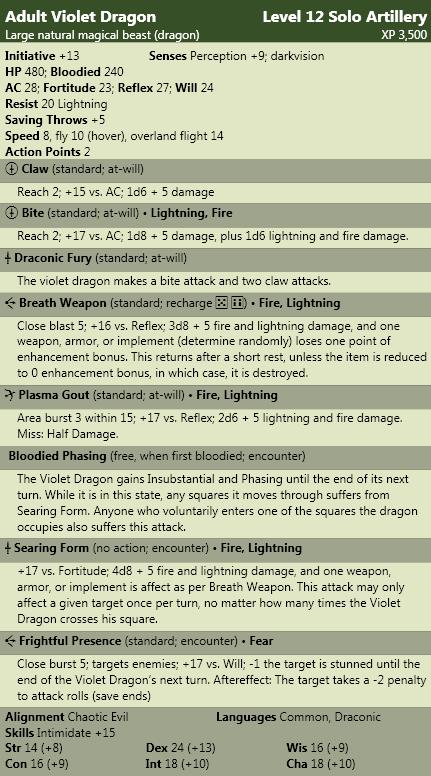