No Idea What I’m In For

But Damn, It’s A Big Box

So, this box has been sitting on my shelf since at least 2012, because it’s listed in the oldest copy of my game database I can find, which is from (obviously) 2012. It’s probably a lot older. I could go back to the photos I took of my game collection circa 2007 or so, and see if it’s there, but why bother?

Seriously, I’ve been carting this around a minimum of 5 years, quite probably 10, and I never cracked the lid. Now, it’s time! Hopefully, it does not contain a raccoon, assorted cheeses, or a pile of stolen diamonds hidden by a thief, under the impression something moldering in the “half off” box at a game store would remain undisturbed forever. (At least, I assume that’s where I found it originally. It might have been in a lost temple in a forbidden jungle, or a forbidden temple in a lost jungle, or a garage sale in Poughkeepsie, but I think it was a half-off box in a game store. Possibly, a game store in a lost jungle in Poughkeepsie. Who knows?)

Anyway, here’s what the box looks like, with a copy of an OD&D book for scale. I wanted to use a kitten, but he had other plans, as kittens do. 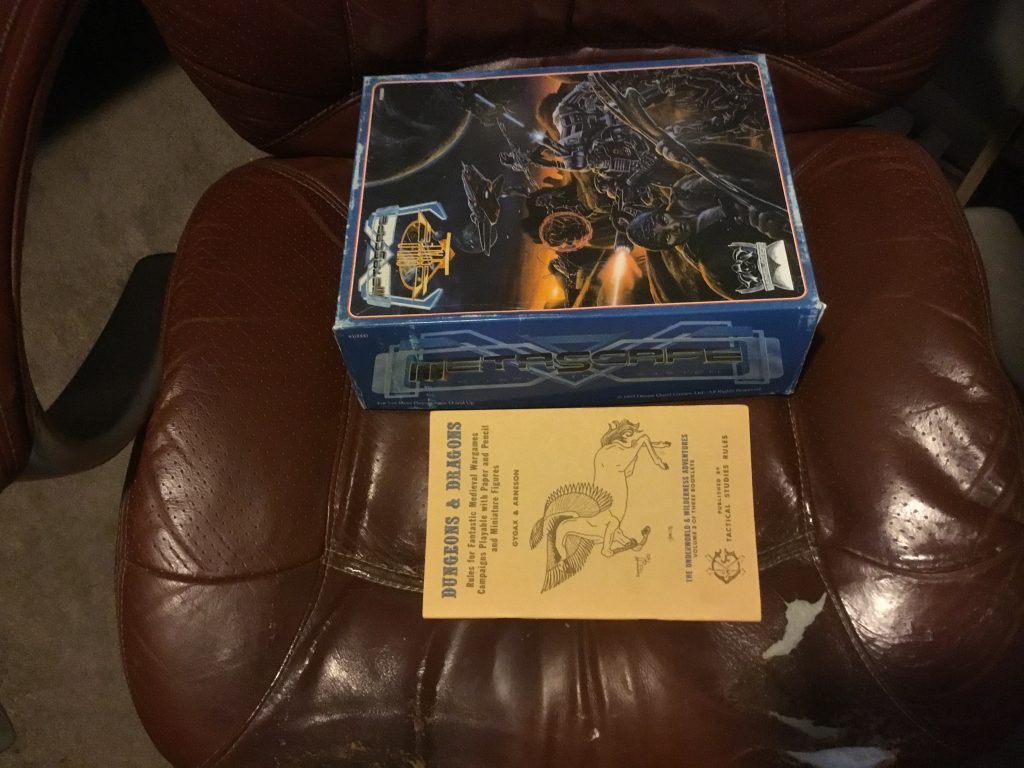 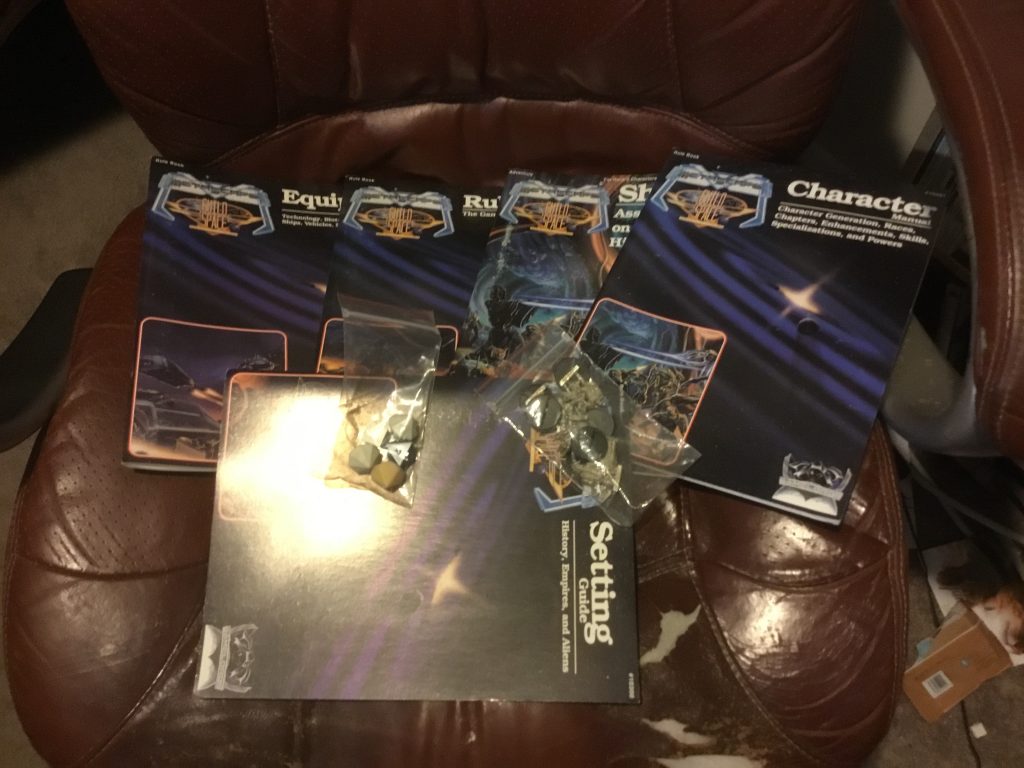 The Contents. Sorry About The Glare. I’m A Writer, Not A Photographer. And An iPad Isn’t Exactly A Professional Grade Camera.

You might notice both dice and miniatures, still in their little plastic baggies. Yup, this is untrammeled snow, folks. Time to trammel it! Is ‘trammel’ a word? Like ‘whelmed’? Or ‘gruntled’?

Well, spell check says ‘trammel’ and ‘whelmed’ are words, and ‘gruntled’ is not. Go figure. 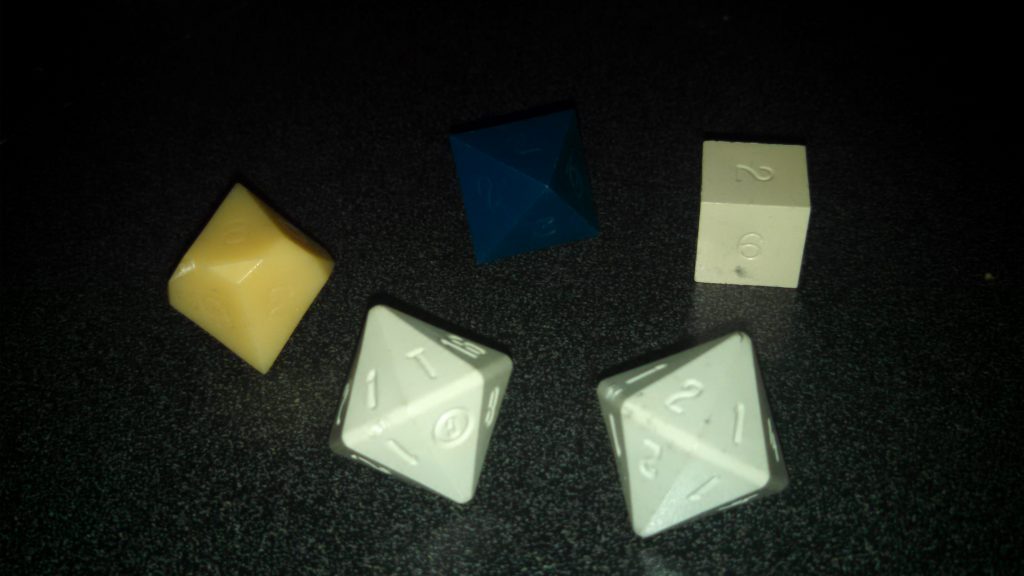 Great, Where Will I Find A Wax Crayon In This Day And Age? 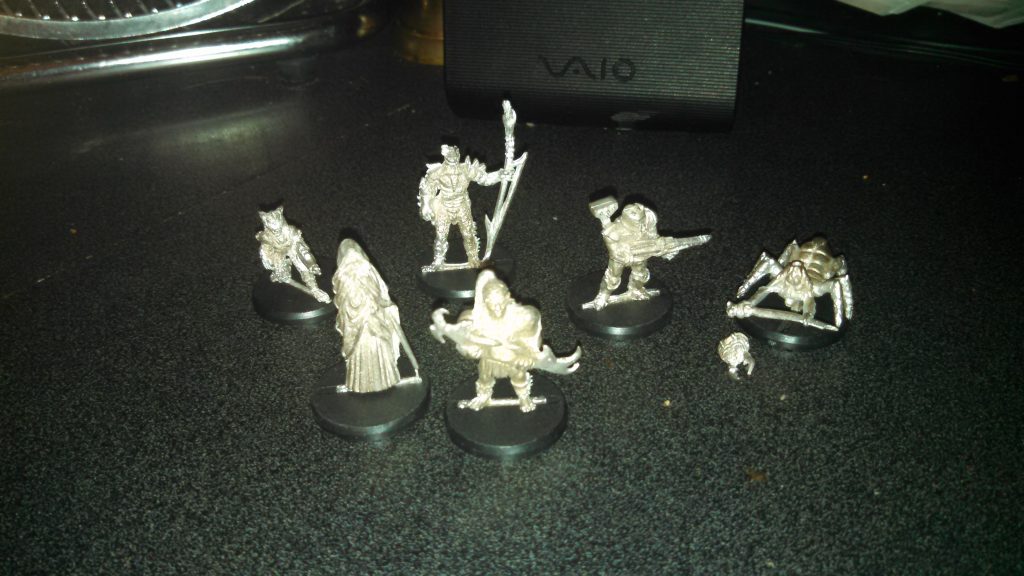 The Figures. Note That Spider-Dude’s Head Needs To Be Glued On.

There are also cards to send in to… I am not kidding… get your name on a gift registry, so that people who order for you from Game Lords(the publisher) won’t risk getting you two copies of the same thing.

They had plans, surely. But as far as I know, the original boxed set is the only product they published. Hmm. Better verify, since I don’t have a press secretary to cover for me when I screw up my facts. Quickly, Carstairs! To the Googlematic Informo-tron!

Nope. I know nothing, like Jon Snow. Now, do I get a redheaded wildling girl who will eventually (spoiler) before she (spoiler) and then (spoiler)? Probably not. There were two modules and a GM screen produced. There’s also some confusion, as there is another RPG company called “Game Lords” that produced the long-running “Thieves’ Guild” quasi-supplements for D&D, but it seems these are different companies, as the game systems are quite distinct and nothing on the Metascape-related sites I dug up indicates any link to TG.

As of 2010 or so, there was still some activity on the aforementioned website. Unfortunately, links from the blog to new editions of the Metascape rules are deader than THAC0. Regardless, we’re talking today about the boxed “Metascape” set from 1993. (Actually, I am learning that “Metascape” is the games engine; “Guild Space” is the setting. There’s a fantasy version. All I could find was the character sheet. Enjoy.)

Hmm. Noticed this when I opened the page.

Everyone Gets On TSR’s Case, But They Were Hardly The Only Litigious Asshats In The 90s

I look forward to figuring out where “Mechanoid Invasion” is used in the actual game… if it is. Obviously, it was at one point, hence, the sticker. (Last minute renamings happen a lot.. I have a copy of “Trinity” by White Wolf… but you peel back the “Trinity” label and you can see it was originally called “Aeon”. They got tagged by MTV because of the latter’s “Aeon Flux” program. Then WW went on to sue the people who made “Underworld” because the latter had vampires and werewolves, which, as we know, are wholly original White Wolf creations. But I digress. Again. Let’s face it, these things are pretty much more digression than… uhm… gression? Digress, regress, egress… no ‘gress’?

I seem to have hit on a running gag. That happens when you’re extemporaneous.

Of Dice And Men

Remember This Site’s Motto: “Free And Worth It!”

You damn punk kids (I use the plural in self-delusion; I doubt there’s enough people reading this to justify it) might not know this, in these soft and luxurious days, where dice are made from the iron that falls from the sky or from the bones of beasts long dead, but in the olden times, dice with pre-printed numbers were signs of wealth and luxury, coveted by many. Hence, the dice in this box are molded of pale tan plastic and have almost impossible to see numbers. A wax pencil is the instrument of choice for filling in said numbers, but damned if I’ve got one. I can use standard dice for the D10, D8, and D6, but two of these are D16s (the author notes, on his blog, he holds part of the patent for the D16. Evidently, you can patent geometry), and not even normal D16s… they have the numbers 1,2, 4, 8 and 16 on them, and a symbol… looks like a copyright. Seriously, a ‘C’ in a circle. What happens if you roll “Copyright”? Are you attacked by 1d4 IP lawyers? What? I guess I’ll find out. No, wait, there’s also a ‘T’. So… 1, 2, 4, 8, 16, ‘T’, and ‘C’. The one appears 6 times, the 2 4 times, the 4 twice, and the 8,16, ‘T’, and ‘C’ once each. I’m sure this will make sense eventually.

So, the first thing in the Character Book is “Go see the main rule book”.

And the first thing in the main rule book burned out my Pretension Meter, which is a shame, as I’d just recalibrated it using first edition White Wolf games.

“More than a game, the MetaScape(tm) System is an unparalleled experience, spanning time, space and the limits of your imagination.”

It’s kind of hard to convey the full tone of the following three columns of self-important puffery without quoting them in full, but I’ll try to summarize:

“Scaping” means “making shit up”. Sorry, it means “harness[ing] the most powerful force in the universe — the power of human thought and imagination!” It goes on to assure the reader that they are among the elite few of humanity who are the “creative and imaginative individuals” that can use this amazing power.

“Finally, there are the rare individuals who can project their entire mind, body, and existence into another Scape. This is the ultimate art of MetaScaping!”

The MetaScape Game System was created by Jodar to harness the dreams and imagination of humans in order to save Trinium.

Damn, but the early 90s were full of incredibly pretentious piles of steaming bantha poodoo, weren’t they? But I don’t care, if there’s a half-decent game system under here somewhere. There’s five books with over 300 pages of material in the box… there has to be something here.

And maybe we’ll find it next week. I’ve been shanghaied into doing dinner tonight. Sigh.