Honestly, Not Sure Where We Left Off Last Time

Something About Motes, Probably

For those somehow ending up here at random, Part I is here, and Part II is here.

It’s been a while, mostly due to Earth Delta slowly but surely staggering along. But here I am, it’s a Sunday afternoon Tuesday morning a week later and I’m locked out of work while they patch security holes, and I figured I’d better post something. I dimly recall I found the actual “How To Make A Character I Mean Persona ‘Cause We’re Special” guide, so let’s see what it says.

Oh, off to the left — assuming this renders anything close to WYSIWYG — is the character sheet.

Step 1 is to select a Predilection which “really suits you” so that you will be ” comfortable dramatizing the persona in its introduction to the Perpetual Society”. Despite this being “Step 1”,
I either missed it, or I didn’t think it was important back in Part 2 and figure I’d get to it later. Well, nope, now’s the time. Each Pride attracts particular predilections, and I did pick Arachne, whose Predilections include Arbiter, Cabalist, Drifter, and Surrealist, among others. Predilections also have something to do with which color in your halo has the most forte and I managed to type that without snickering. Barely. Hm. Let’s reverse-engineer this, since I already assigned my motes of fixed immaculum to my halo, which is totally a sentence I expected to write, well, ever. I’ll go with Arbiter as my Predilection.

Step 2 is picking your affiliation – or in other words, your Pride and your Calling. Given my Predilection of “Arbiter”, a calling as “Emissary” seems fine, and I’ve already picked Arachne. You are, technically, supposed to recall your career during play and write down what you want, and the Narrator will work it into their Production.

I assigned motes of immaculum to the forte in my halo already, but it seems I can buy more. I need, you will recall, at least one mote of free-floating immaculum in order to perform serenades, and if I have three or more such motes, I gain an additional escapade per clash.

…I gain an additional escapade per clash.

How is this not a satire of the type of game that it is?

Anyway, I have 100 memory motes in addition to the 15 motes I already spent. But they need to be paid for a lot of things. Hmm. Lets review where my halo stands:

Huh. I did the math wrong, originally. I should have had 3 at 3 and 3 at 2, optimally. The above is 17, so I’m already up 2. So let’s begin by buying two more motes of fixed immaculum. By the way, did I mention that the charts showing the cost of spending motes occur over 20 pages prior to the rules about what the frak you’re spending them on? I didn’t? Well, are you surprised? No? Surprised that I didn’t, or surprised the rules are laid out like this? No to both? OK.

Anyway, I need to spend 10 memory to bring myself to 17 total immaculum. If I spend enough to get to 19, I can reach the third tier of himsati. This costs 11 more, for a total of 21. Hmm. I’ll kick Blue (awareness) to 4, and Red all the way up to 5, That puts me at the upper limit of human intelligence and will, and lets me operate effectively without vision.

To get the three free floating motes needed to drive my Escalade to go see The Clash, I need to first spend 22 points to add them to my forte (or maybe add them to my halo as forte? Or something?) and then 6 more (don’t ask, just trust me) to set them free. So that’s 21+28=49 points spent so far on attributes.

I have 51 points to spend on “Talents”, “Attentions”, and “Legacies”. This evidently interacts with Pride, as (reasonably enough for this genre of game) costs are lower if they’re favored by the Pride. The costs are given in chapters 7 and 9. Maybe “8” is unlucky for Immortals because the Confluence of Emanation Sundered the Antipathy Of the High-Father and thus created Dischordance amongst the Quasi-Souls of the Ur-Infinite.

I can do this all day.

See, It’s Like ‘America’s Got Talent’, But The World Is The Habitat So… Yeah. Moving On.

Talents are normal, mundane skills, while Attentions deal with Serenades. Both follow identical resolution mechanics, which is nice. They come in ranks, from untrained (-5) to Laureate (+5). The system jumps from -5 for untrained to +1 for familiar, a design pattern still seen today — Pathfinder 2, for example, does something similar. (Ancient Immortals can reach the rank of Virtuoso, which requires them to live for centuries without entering lethe. Given that it just kicks the +5 to a +6, it doesn’t seem worth it, unless it also unlocks special abilities.)

I am obliged to point out that under all the foofaraw, there’s a workable-seeming and simple resolution system. I haven’t done the kind of extensive mathematical analysis theorycrafters do to prove or disprove some mechanic is viable, but it passes the initial sniff test. You add the motes of immaculum in your halo color corresponding to the hostile to the talent, or, in the Lesser Tongue of Twilights, “attribute + skill bonus + d10 against a difficulty number”.

Well, it’s slightly more complex. I re-read this a few times and hope I got it right. You also roll against hostiles using your raw color. So, using their example, there’s two rolls to climb a building in the rain. You need to beat the rain, which requires a Rank 2 success, and you need to actually climb, which needs a rank 3 success. The example has the Immortal fail to defeat the rain hostile, but they rolled really well on their climbing, and the bonus success on climbing could be applied against the rain. This is… interesting… especially if the hostile and the skill are different colors. Maybe you’re also carrying a body, which would be Orange (Strength), and the GM… er… Storyteller… er Narrator decides it’s a Rank 1 Hostile. You’d need to roll your orange d10 + your orange immaculum to overcome that, and your yellow to overcome the rain, and your yellow again for the actual climbing. I would have just increased the difficulty number, but this does model how different attributes contribute to an action — if you have a lot of red motes, you may trivially succeed at overcoming the orange hostile, so extra successes on the climb check will go further.

Anyway, I’ve got 51 points to work through.

Talents are divided into categories, starting with Academics. Well, that’s pretty normal, maybe we’re out of the mire. Then there’s Aggressions, Attentions, Genteels… so, no, we’re not. We’re sinking deeper. Legacies, Remedies, Rustics, and Urbanes round it out.

Costs are based on talent complexity cross-indexed with the rank you want. The text above and below the chart is a bit… contradictory. Is complexity based on real-world difficulty, or game-world utility? 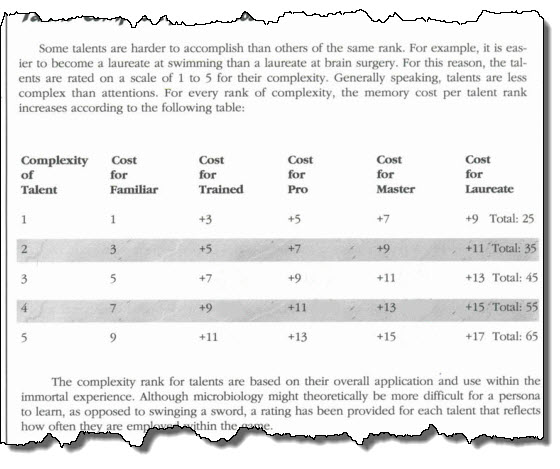 Well, either way, let’s get on with this. As a reminder, mostly to myself, my Pride is Arachne, my Calling is Emissary, my Predilection is Arbiter, my Dilemma is Obfuscatory, my Fraternity is Taurus with a Vodka Chaser, and my Metaphor is Apotheosis via Transubstantiation. (I may have made up some of that.)

Legacies
Momentum: Familiar (7). (This allows me to resist the held/grappled hostiles. The complexity is reduced because of Pride Arachne)

Attentions
Gemetria: Familiar (7) (Also Pride-based. This rather niftily lets me divide myself into three duplicates, none of which can inflict damage, but all of which can run away. This is great unless I’m fighting Computo.

Very few Talents are Complexity 1. This makes getting beyond Familiar pricey. I went all the way to “Trained”, not even “Pro”, in Law because it seems to fit my character design. The rather limited other Talents I could afford round out who he is… someone who tries to avoid physical conflict. I actually swapped out a different legacy for Momentum as the character concept became more clear.

Did I spend too many motes on my Aura? Does it worry me that sentence makes sense to me now? “I dunno”, and “Yes”, respectively.

Approaching The End of All Things

Or: “Immortal, The Inevitable Conclusion”

There’s a lengthy questionnaire about your persona, which reminds us of the overall pretension level in the game by noting this will develop the “identity of the ingenue”, since “the current personality is only a shadow of the eternal being underneath”. The questions include “Describe the perfect meal” and “Describe the creation of the universe in detail.”

Due (probably) to my overspending on motes of immaculum in my aura, I have nothing left for Contacts, which is a bit of a bummer. Looking back, 28 points for three motes of free immaculum was probably a mistake for a beginning character, but this has really gone on long enough and I’m not going to go recalculate everything. But with the extra Escalator in each Crash, or something, my character persona has an additional chance to Sir Brian the heck out of there. Those three free motes create a “ripple” which can be sensed by anyone with 13 blue motes (which doesn’t seem to be a lot of people).

The actual details of how the magic and combat…. I mean, serenade and clash… systems work is beyond the scope, perhaps even beyond the listerine, of this article. Both seem, at a glance, fairly detailed. The combat chapter is about 33 pages, or a bit over 10% of the book, and there’s 7 pages of weapon listings in the appendix. Firearm recoil, hit location damage modifiers (and called shot penalties), and even various types of scopes get some attention.

At this point, my conclusion is similar to that of friends who are familiar with this game: There’s definitely something of value under there, buried in unnecessary “different for the sake of being different” terminology, and inviting casual dismissal due to the eye-rolling “you are discovering your true immortal persona” conceit that worms through the rules like a crawling, wriggling…. worm. Less odious, but still a barrier to anyone saying “Hey, let’s try this!”, is the sheer vastness of scope and concept. This is a difficult criticism for me to make, because the alternative — ultra-narrow games where the system and setting support one kind of story, often with a foregone conclusion — are pretty much anathema to me, even if I can recognize the precision of design and the strength of mechanics supporting theme which some of them possess. With Immortal:The Invisible War, you can have trenchcoated mystics battling in back alleys, mysterious elites pulling strings behind the scene, adventures in Rome or Egypt at their mythic height, cities of immortals in the ocean depths and Antarctica, X-Files/MiB style skulking to maintain the secrets of the Perpetual Society, and more. There’s also factions and concepts outside the “core” Prides and Strategems. And it’s all info-dumped in an ironic mix of decontextualized sidebar/footer definitions on one hand and long pages of nigh-incomprehensible text on the other.

Would I run this? Meh, probably not. My preferred tool for kitchen-sink settings is something like GURPS, Hero, or BESM. Would I steal ideas from it? Well, of course! As a great revolutionary, soldier, and leader once said, “Everything is Fodder”. Would I play in it? With a GM I liked and whom I knew could navigate this maze, sure.