Or As My Wife Calls It, “Solar Cosmic Blades Spells”

The Title Design Could Be A Little Clearer

But, C’mon, The Cover Has This Floating Brain With Sunglasses And There’s A Guy With A Laser Sword On An Eight Legged Thing And There’re Evil-Looking Robots Using Machine Guns To Attack Triceratops People But The Triceratops People Have, Like, Spider Legs? Or Something? Whatever. It’s Awesome. 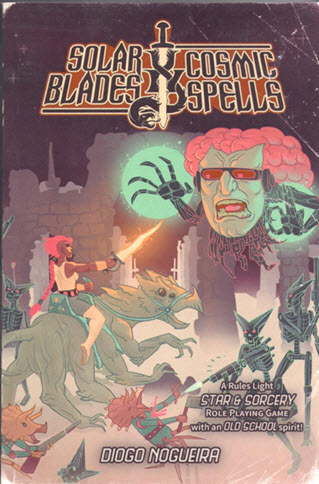 This is a game I’ve had on my “flip through it a lot” pile next to my computer, something to pick up and skim while waiting for some process to finish. It’s simply overflowing with ideas, and while it’s rules-lite, it’s not rules-weightless; there’s enough of a framework here to build on, or so it seems. But the proof of the mutant psychic star-destroying pudding is in the miles-long silicon-based space-dragon eating it, or in this case, rolling up a character in it, so, here we go!

The setting is He-Man meets Star Wars meet Flash Gordon meets the original Lost In Space meets Lensmen meets Kirby’s New Gods meets the Guardians of the Galaxy meets heavy metal album covers meets some really good acid. Galactic civilization, such as it was, has collapsed into warring fiefdoms run by insane, godlike, Cosmic Overlords, and vast swathes of chaos between. Into this mad universe of psionics, spells, cyborgs, and swordplay come the PCs: Roguish heroes or heroic rogues, knights or mercenaries, out to survive, profit, and maybe do some accidental good along the way.

Let us create one!

3d6 In Order. So It Was In The Beginning. So It Shall Be In The End.

Only four stats, though:

Better than usual, although, once again, I crap out on the Dex-like stat.

The next step is a character concept. Looking through the Archetypes of Tough, Nimble, Smart, and Gifted, I decide to go with Gifted (Psion/Jedi/Space Wizard), and have, as a concept, an “archaeologist” (tomb robber) who “discovered” (stole) an ancient artifact and found themselves transformed by it, given strange powers beyond mortal ken, but probably not beyond mortal Barbie, if you buy the right accessories. Now, they are compelled to scour the cosmos seeking more power, but, unknown to them, they are also being subtly manipulated by a Galactic Overlord who is using them as a pawn to find relics of sufficient might to be of use to them. The details of this will be set by the fictional GM. (Called the Overlord in this game, for obvious reasons.)

I am going to stick to human as my species.

Being Gifted gives me a Recovery Roll of 1d6 (determines how much I heal, I think), and the powers “I Sense A Disturbance”, “I Make My Own Reality” (start with three powers), “The Void Hungers”, and “There Is Power In Blood” (Lets me burn Physique and Agility to increase the chance to use my powers, but these have to be recovered.) It also gives you heightened expectations of a glorious future that are not met because you’re lazy and get bored with things as soon as you prove to yourself that you can do them, so, actually doing them becomes non-interesting and never happens, and you end up living in rural Kentucky writing game blogs instead of winning Nobel Prizes. But I digress.

Looking at powers, it seems I can be a sorcerer or a mentalist. They’re similar, but sorcery involves learning powers via studying and practice, while mentalism is innate gifts. Given my concept, either works, but I’m going for sorcerer. The artifact… it needs a cool name… hmm… “The Void Emerald of Forgotten Zakash”… forced the knowledge of sorcery into my mind, along with three powers. Now I seek more knowledge. More! MORE!!!

There’s a nice long list of sample powers, and the Overlord is encouraged to make more. They aren’t broken down by level; all powers are created equal, it seems. I will pick damaging touch, animate dead, and sigil of return (teleport to a marked safe location).

A word on mechanics: The core game mechanic has a unique twist on “roll under relevant stat”. You must roll under the stat, but above the difficulty. So if I have to jury-rig a computer and the Overlord says it’s difficulty 4, I have to roll less than or equal to 12 (my intellect), but above 4, so, 5-12 is success. 13 or higher means the task was simply something I’m not capable of, but 4 or less means the difficulty of the task itself stymied me — perhaps I triggered a buried security system, for example. There’s also Positive and Negative dice, rules for “Pushing” a roll, accepting complications (choosing to fail a roll or enter an obviously dangerous situation) in return for 1 luck point. In other words, starting with a simple mechanic, there’s a lot of options and facets to it that add potentially interesting mechanics.

Now, I roll for a Complication. I can also pick one, or work it out with the Overlord, but let’s roll, instead. When all is said and done, I am hunted by a crime lord — possibly one I stole from when searching for more forbidden lore.

My Credit Score is 2. The game doesn’t track money in absolute units; you must make a Credit Check to buy non-common items. This is a D6 roll less than your credit score, which can increase if you find loot and automatically decreases by 1d6 between adventures, the reason being given on a chart. I will summarize this as “I spent my reward on ale and whores.”

I otherwise start with any mundane equipment I might reasonably need; the Overlord may veto my claim that an anti-matter sword is “mundane equipment”. (I don’t know if anti-matter swords are listed, but if they’re not, they should be.) So I’ll go with Medium Armor (max Agility 14, so, fine), a small ranged weapon (which I define as a holdout pistol) and a small melee weapon (a ceramic boot knife), both of which grant a positive die to conceal.

Other reasonable gear would include:

So that’s about it! I come in well under my encumbrance (19, with the backpack adding 4 to my 15 Physique). I am now ready to explore the madness of the cosmos!

And for the first time in this series, I filled out a character sheet! 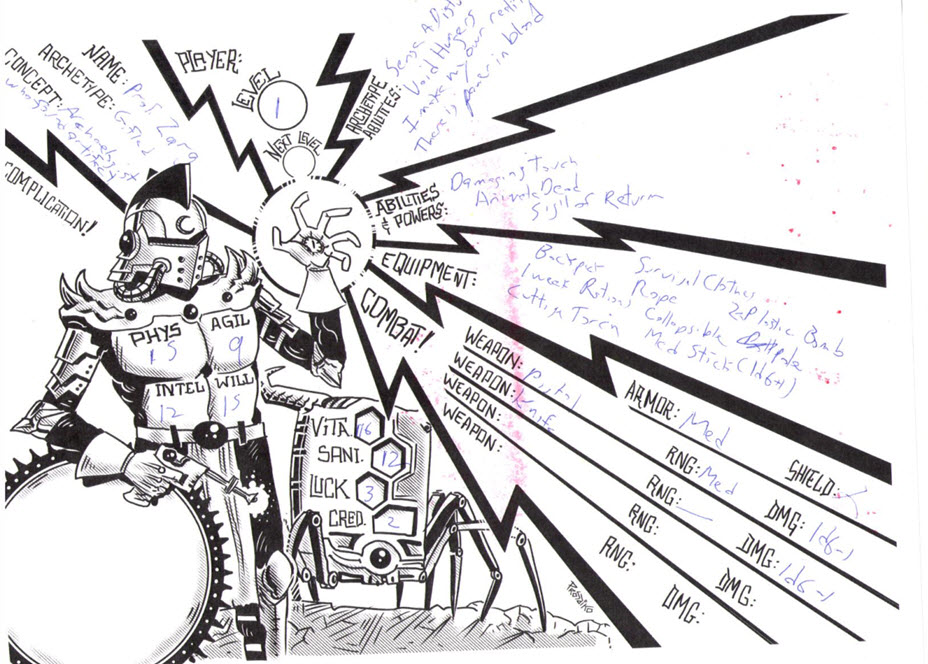