Before Rifts! Before… Oh, Let’s Face It, No One Cares About Anything Else Palladium Has Done

And The Other Two Books In The Trilogy, Though No One Ever Really Paid Attention To Them, Either

But There Was A Great Concept At The Heart Of Book 2: The Journey. Needed Way More Development, Though

A Buzzsaw Shark. This Has Nothing To Do With Mechanoids Or Palladium.

So, here we are on Day 16, and I’m still one day — but only one day — behind. To keep it that way, we’re going for another game which I dimly recall had pretty quick chargen. This is “The Mechanoid Invasion”, published in 1981 by Palladium Books, and not only was it the dawn of the Palladium house system, it’s also the mid morning, the coffee break, and the Is It Lunchtime Yet, because, honestly, the system has changed only somewhat. It’s like a shark. Yes, sharks have evolved a bit, but they’re also still pretty much sharks. Except we don’t have those weird buzzsaw sharks any more. Every seen them? They’re freaky.

I am clearly a little distracted. I had best get rolling. 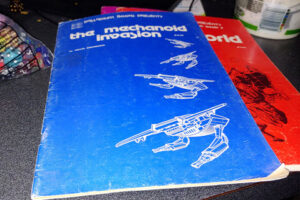 There was the Gideon colony. Then a ship roughly the size of North America (yes,really) showed up, launched an attack, devasted the colony, evaporated the oceans, and began work on setting up planet-destroying (literally, as in, “Page Jor-El and tell him to get his son ready”) mining operations. The pathetic few human survivors of the attack, along with some native humanoids they had to stop exploiting momentarily, struggle to hold out long enough for the Galactic Federation to arrive and save them. (The second book is about humans who managed to sneak on board the giant mothership shortly before Gideon was destroyed, so, spoiler alert! They didn’t get there in time.)

You don’t know this, of course, because the second book won’t come out until 1982. You are a normal human with very limited weaponry, up against a race of militant mechanoids — soft, fleshy, organic blob-like beings surrounded by an impenetrable armored shell bristling with weapons, filled with loathing for… all… humanoid… life… and.. does this seem… familiar? Nah!

We begin with 8 attributes!

(Did I mention my almost 40 year old copy, bought at the Compleat (sic) Strategist in New Jersey (the Jersey store is long gone, I believe), is printed on newsprint and is yellowing with age? Awesome!)

This is OLD SCHOOL, folks! 3d6 in order! (But first, a quick trip to a name generator: Callum Reed.)

Now, I must pick an OCC (“Occupational Character Class”. As with all Palladium games to follow, this is full of TLAs). The choices are pretty generic. I’m going for LBA (Light Battle Armor)

I now get three “electives”, one of which must be a weapon proficiency. Since the illustration for the OCC has a guy with a laser, I will pick Lasers as one of my electives, granting me a 25% Weapon Proficiency and a +1 to hit. I will also choose Hand To Hand proficiency for a +1 to dodge, and Medical at 20%.

Hit Points: The rules mention them in one or two spots, but no rules are found for generating them. I found my copy of a later edition, a reprint of all three of the original books in one volume. This claims to reproduce the text of the 1981 edition exactly. In the words of Dolores Umbridge: “This. Is. A. Lie!” There is a paragraph printed in that book that is not in the original, specifying your hit points are equal to your Physical Endurance, +1d6 per additional level. So, 12 glorious hit points! (However, the SDC — Structural Damage Capacity — of my armor is destroyed first, and there’s a lot of that.)

And that’s all, folks! Things were a lot simpler back then! And if you look at how lethal the mechanoids are, and how few resources you, as a PC, have to bring against them, it’s probably good character creation doesn’t take long.