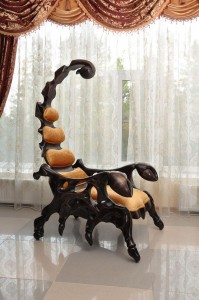 Owen Stephens posted this image on FB. With the Halloween theme for RPGBloggers being Things That Go Bump In The Night,[1] I decided this fit, reasonably well, and as you may have noted from my update schedule, getting any content on here lately is a triumph, so you’ll bloody well like it!

This figurine is actually constructed as a clever mechanical puzzle, about four inches in size. Interlocking and pivoting parts allow it to be transformed between the scorpion shape and the form shown in the picture above. (Rumors of similar figurines, which include a freight carriage, a crossbow, and a glider, cannot be confirmed.) When the command word is spoken, it becomes one of two creatures, depending on the form it was in. If it was only partially changed, the command word fails. (Reconfiguring the figurine is a standard action that provokes an AOO. Excessive force is not required!)

Form 1: Battle Scorpion
The figurine becomes a Giant Emperor Scorpion, which will obey the orders of the owner. It can be summoned thus once a day, for a period of up to one hour.
Form 2: Walking Throne
The figurine takes the form shown above, a six-legged throne capped by a long, pointing, tail. The throne can support a single small or medium-size rider carrying up to 350 pounds. It will travel at 40’/round and is extremely agile, ignoring difficult terrain, light undergrowth, and similar minor impediments to movement. It has an Acrobatics bonus of +18, which it can use to jump, pass through threatened areas, etc. It is treated as a Large Animated Object with the following exceptions:
The throne is treated as a mount for most purposes, including mounted combat feats if appropriate. It obeys the rider completely, and no Handle Animal or other such checks are needed. Ride checks, if required, gain a +4 bonus due to the Scorpion Throne’s construction.
The throne form can be summoned for up to 24 hours over the course of a week, divided as the owner sees fit. If killed in throne form, it cannot be resummoned until a week has passed.
CONSTRUCTION REQUIREMENTS

[1]Originally, I’d misread a word and had begun working on a PF version of the table on p. 192 of the 1e DMG. Well, that’s 200 pages of content that will never get published, not to mention a trip to Nevada I can no longer claim as a research-related tax writeoff. Ah well.