This may be a briefer-than-usual article, as I lost yesterday’s writing time to Mother’s Day duties, and today I have my weekly Pathfinder game, and normally I’d just say ‘smeg it’ and not post, but I did that last week, and once you get a two week gap, it turns into a three week gap, and then it’s August and I’m like, “Smeg, when was the last time I wrote anything?”, and so it goes…

Werescorpion? There Scorpion. There Dungeon.

Leaving grappling rules, we now turn to were-creatures, because, why not?

I remember the were-chart as being somewhat more outre than this, but that might be from another source, or it might be my aging brain finally catching up with me. Anyway, we have an assortment of were-critters. It’s worth bearing in mind that, at the time, there were only six ‘official’ werebeasts, and this was long before the age of templates that granted you the ability to make a half-ogre/half red-dragon who was also a were-fox and possibly a construct. Monsters were, for the most part, designed ‘whole’, so a were-otter was its own thing. (Honestly, it’s surprising that templates took so long to come into vogue… in hindsight, they seem an obvious idea, and in some ways more suited for the wild&wooly days when we cared more about ‘Awesome!’ than logic, game balance, common sense, or how long the DM had to work writing an Excel sheet to handle monster building.) 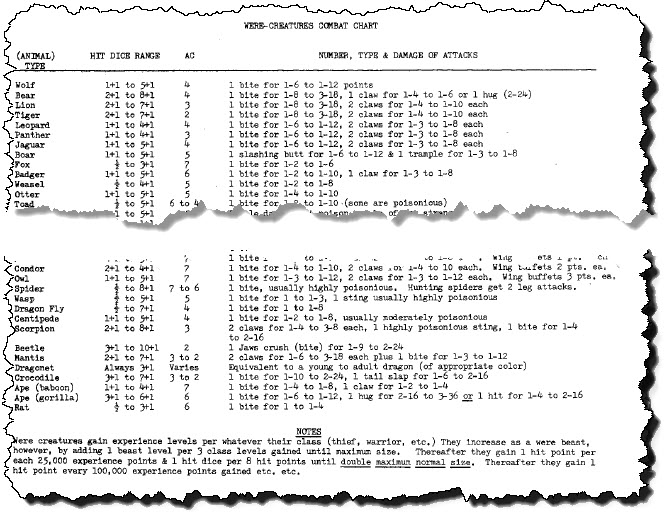 It is worth noting, because it will come up again (and there will be a quiz) that these creatures have a ‘hit dice range’. This was not common at the time. Normally, a monster had set HD, and that was that. One reason for the plethora of humanoids was to provide challenges across multiple levels, so you’d start with kobolds and work up to orcs, hobgoblins, bugbears, and ogres. Having hit dice ranges meant a creature could be a threat across a wider level range. And, since hit dice was basically the ‘level’ of the monster, affecting saving throws and some types of magic (such as sleep), this simple innovation by Mr. Hargrave foreshadowed 3.x’s ‘monsters and PCs follow similar rules’ design. Damn, I need to start cataloging all the mechanics in Arduin, many predating even AD&D 1e, which became standards in D&D 3.0.

I admit to being a bit confused by the experience rules… does his mean that a sixth level warrior becomes a second level wereowl? Also, I assume the DM is supposed to interpolate the attack damage against the hit dice range. Ditto AC, for the few cases where it changes.

I’ve Got A Golden Book Of Dinosaurs And I’m Not Afraid To Use It!

Next we have a bunch of basic dinosaur stats, roughly 1 1/4 pages, and then they turn into sea creature stats.

Not Shown: Icthyarsaurs Are Playful Unless Hungry Or Aroused. Good To Know.

Not really a lot to add or comment on. These don’t dramatically extend the existing dinosaur stats; maybe Dave just wanted his own chart, or disagreed with how Gygax rated various extinct critters. Indeed, the exact hit dice of a T-Rex has been a subject of considerable paleontological infighting over the years, leading to more than a few academic careers being ruined by the incessant backstabbing. Jack Horner’s famous speech at Indiana University, ’15 Hit Dice, Armor Class 3, And No Claw Damage’ is often cited as the ‘Attack on Fort Sumter’ of the still-ongoing debate.

Oh, being scraped by a shark’s skin does 1-12 damage… when you consider a typical human had 1-4 hit points, total, this makes you wonder why sharks even needed to bite. Just brush past the prey, and it’s dead.

Escape From The Kraken

Half Percentages? Yeah, They Were A Thing.

Just putting this here to show you what we went through in the absence of any formal ‘Escape Artist’ checks. Note, also, that neither Strength nor Dexterity formally figure in to these numbers… just raw class+level.

I said, this was going to be a short one. (“That’s what she said!”) I’ll leave you with a bit of a ‘teaser’ for next time… a segment of the Encounter Chart, because we’re finally at the monster section.  (OK, we’re going to get through weather, diseases, and mists first… but here’s the encounter chart, anyway.) Shydras, Demon Locusts, and Ibathenes, oh my!