Because Of Course There Are Cyberpunk Rules For Toon

So I Had To Spend 15 Bucks On A Digital Copy For This Article. I Hope You Appreciate It. 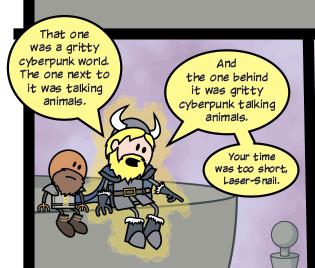 Laser Snail, Laser Snail., During Ops He Does Not Fail

So here we are, on the article that would be the Christmas posting if I wasn’t a day behind, and in honor of the spirit of the season, I present, hopefully, Laser Snail. The confluence of thoughts went something like this:

Behold! A Laser Snail Is Born!

Now, I need to remember how to make Toon characters. It’s been a long, long, time. Like, at the time, the game being satirized, Cyberpunk 2020, was new and current.

(Digs out corebook, cross-checks to verify the basic chargen is the same for Toonpunk 2020 1/2. Seems like. Except for Speed. Took me a while to find that, since it was buried in a section that said “You probably won’t need this section for Toonpunk.” Sigh.)

Laser Snail is a mollusc of mystery. No one knows where he came from. No one knows where he’s going. He has but one goal: To destroy the Sinister Cargo Corporation by any ridicule necessary. He will drop pies on their chief executives. Carve mocking cartoons with his laser eyes into their ships. Arrange for very heavy things to be loaded onto planes so they fall out the bottom when the planes take off. Replace the recordings of their corporate anthem, played hourly, with Yakkety Sax. He uses his Incredible Speed to get in and get out, but also to undermine their business by delivering packages, often giving their own couriers a hotfoot along the way.

Beliefs and Goals: S-Cargo must fall! He who laughs and runs away laughs at the people he runs away from. Make deliveries on time! Who needs to know things if you’ve got a Smart Gun?

And we’re done! Lemme note that this rules-lite game of cartoon silliness from the early 1990s is actually more complete and complex than an awful lot of non-silly “rules lite” games published today. Make of that you will.

Also: In the “Mektoon” portion of the “Tooniversal Tour Guide”, there is a “Strifepath” section — which is a parody of the “Lifepath” rules from the “Mekton” game that was the de facto “giant robot pilot” game of the time… which, as I noted, was the direct predecessor of Cyberpunk 2013, which is the ancestor of the current Cyberpunk 2077 computer game everyone’s cranky about. All creation builds on prior creation. Deal with it.

[1] But his friends just call him Hidden. Get it? Get it?