A few excerpts from something I’m working on. I’m also spending too much time working on the PF version of Earth Delta. Oddly, I don’t think Starfinder is a good fit for it… I prefer the higher level of crunch and detail in the classic Pathfinder rules for that project. But for now, enjoy a few samples of what goblin creativity entails.

Again, this is pasted out of Word, where it looks really good, and the HTML formatting is… passable… at best. (EDIT: It’s actually refusing to let me edit or adjust a table to be anything like a viable width, and I keep going down a rabbit hole of being unable to get any content to look good… very frustrating. I should not have to learn CSS to have a good looking blog. This is not 1995. The lack of decent WYSIWYG editing tools that handle things like tables well is insanely frustrating. So after 90 minutes of fighting w/tables and other BS, I’m cranky, so I’m only going to post one item now. Maybe more later.)

“Dis gun’s got a right end, and a wrong end, and you is standin’ at da wrong end… no, wait, are you? Uhm… OK, if dat’s da plasma emitter, den dis is da magnetic doohickey… no, hang on, dis is da coffee attachment, so dat must be da plasma… wait… should it be makin’ dat noise?” (Last words of Strangg Gungimmicker, goblin weaponsmith.)

Curveball: The discharge from this weapon can bend and turn in the air, following a non-linear path. If the wielder takes a full round action to aim, it can ignore a single source of partial cover, such as an ally or a corner.

GobTech: Any goblin-made weapon has a tendency to fail at the worst possible moment.

Slicydisk Hurler: What do you get when you combine diamond-edge saw blades, ultracompressive springs, and a trigger mechanism?  This. A pistol-sized weapon, it hurls a rapidly spinning monomolecular edged disk at the target. A skilled wielder can put just the right angle on the blade to have it zip around a corner or an ally blocking the way. An unskilled wielder… well, if the attack misses by 5 or more, the blade boomerangs around and hits the firer. They can avoid this fate by dropping prone (as a free action), which may or may not prove to be a poor decision.

If it took me virtually no time to get Word to look like this, and easily save the styles and formatting as a template for future use, why can’t I do it on the Web? Underlying the WYSIWYG interface in Word is a page description markup language, just like CSS or PostScript or anything else. The lack of visual editing tools for the web that go beyond “bold, italic, underline, and screw you if you want more” is an abomination unto Nuggan. 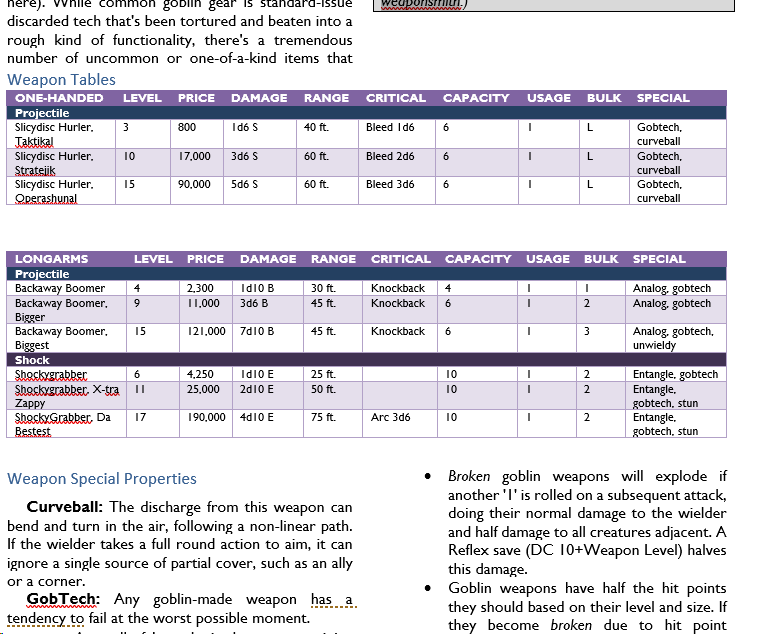