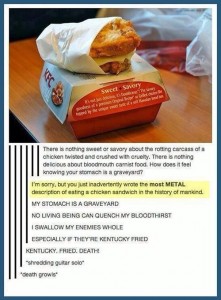 I take my inspiration where I can find it…

OK, the move is technically complete… we’ve been living here for two weeks, but there’s still a lot of stuff in boxes. Among the stuff in boxes is my copy of Welcome To Skull Tower, which is why no new articles in that series have yet appeared. (That, and this is the first time since we moved that things were normal enough I could get up, get dressed, and plonk down at my computer for a spell before work.)

So, in the interest of getting some content up here… here’s something I threatened to write a while back, inspired by the image that ought to be appearing to your left.

This is “Breakfast Crunch” stuff. For those of you new to this site (I like to pretend I regularly have readers; hey, I’m a roleplayer, I have a rich fantasy life), “Breakfast Crunch” is stuff I write while sitting at my computer eating breakfast before going to work. It has all the playtesting, editing, attention to detail, and overall quality you would expect under those circumstances.

Some barbarians live for one thing… the taste of living flesh. They believe they draw primal power from consuming flesh… live and bleeding preferably, but dead will do. They’ll settle for cooked, if necessary. Even dried meat contains some sparks of the former living essence.

A bloodmouth carnist will not consume plant matter (except in fermented form) unless desperately hungry. They only buy rations that are meat based (if you just use some generic ‘iron rations’ in your game, pure-meat rations, usually consisting of jerky, etc., cost twice as much). Survival checks to find food are at +2 DC, because only hunted game will do… no roots and berries! A bloodmouth carnist actually takes damage from goodberries, (or any similar spell) as much as would normally be healed. If a bloodmouth carnist consumes plants to survive, they gain a temporary negative level until they can eat an appropriate meal again.

They gain a +4 competence bonus to detect plant-based poisons concealed in food.

Rending Teeth: At first level, the bloodmouth carnist gains a bite attack, doing damage appropriate to their size category (1d6 for medium creatures). When facing any enemy other than incorporeal undead, plants, constructs (except flesh golems and the like), oozes, elementals, and similar (based on GM discretion), they must hit with a bite attack (even if it doesn’t penetrate DR) before they can use any other weapon. If they try to attack without performing this ritual, they suffer a -2 morale penalty on attack and damage rolls. This attack will never subject them to ingested poison, but this does not let them consume otherwise poisonous flesh outside of combat.

This is a natural weapon, and can be enhanced by spells such as magic fang. Whenever they score a critical hit with this attack, they gain temporary hit points equal to half the damage inflicted on their enemy. These don’t stack, but if the amount gained is more than the amount of temporary hit points remaining, the new, higher, value takes effect.

At third level, their bite attack is considered to be a magic weapon for purposes of overcoming DR.

At sixth level, their bite attack does damage as if they were one size category larger.

At ninth level, their bite attack has the bleeding attack feat, and also counts as a silver or cold iron weapon for purposes of overcoming DR. (They cannot bite themselves to inflict bleeding damage in order to use the self-rending ability.)

At twelfth level, their bite attack gains their alignment for purposes of overcoming DR, and gains a threat range of 19-20.

At fifteenth level, their bite attack is treated as if they were two size categories larger.

At eighteenth level, their bite attack ignores all DR. Yes, they can chew an iron golem. Tenzil Kem approves.

Self-Rending: When a bloodmouth carnist takes bleeding damage, they may choose to tear at their own flesh (once per each triggering wound) as an immediate action, inflicting normal bite damage on themselves, and increasing the bleeding by 1d3 points/round. This grants them a morale bonus to attack and damage, for their next attack only, equal to the increased bleed. For a full round after this, healing magic or heal checks will not end the bleed condition.