Does What It Says On The Tin

So, I’m 95% done with a chargen article on The Morrow Project (early 80s version) and I have been for several weeks, for reasons explained in that article, which will be posted after this article. Wibbly wobbly, timey wimey. And this morning, YouTube’s algorithms showed me a “Robot Chicken” episode about “Bitch Pudding”, and I got an idea for a spell. Also, I’m really burned out on Angular right now. I’ll get back to it, but at the moment, I’m finding it non-Euclidean.

While I figure most everyone who reads this blog (both of you) is familiar with Robot Chicken’s oeuvre, for anyone who isn’t, the following clip is NSFW and contains graphic violence by and upon action figures. Relevant portion is at about the 3:40 mark.

So, you see the not-a-smurf-for-copyright-reasons who gets his hands turned into alligators by the squirrel wizard? See the title of this article? Can you see where I’m going with this?

Sorry, it’s been a crappy couple of weeks, and I’m crankier than usual. Yes, it’s possible. Just like the Hulk’s strength, there is no upper limit to my crankiness.

Anyway, another “old and new” mix: For AD&D 1e and Pathfinder 2e. Huh. Apparently, I haven’t done of these for spells yet. Weird. I would have thought I had.

It is rumored this odd dweomer originated when a magic-user tried to create a version of the clerical sticks to snakes spell. They failed, but the research put them on the path to this unique arcana.

If the caster targets themselves, their hands transform into the heads of alligators, with the wrist of the caster’s arm merged with area just behind the reptile’s eyes. Any items they may be holding at the time are dropped. They can no longer cast spells with somatic or material components, but they do gain two bite attacks per round, each doing 1d4 damage, and they attack on the cleric table rather than the magic-user table. (Multi-class magic users use whichever table is most advantageous, either their normal one or the cleric table.) There is no saving throw if the spell is cast in this manner, and the caster can terminate it before the normal duration at will.

If the caster targets another creature (which must be generally humanoid and not undead; the type of creatures listed for Charm Person should be a guide), then, the effects are similar but less benign. The target may save vs. polymorph to negate the spell. If they fail, the transmutation occurs as noted, items are dropped, etc. The two hands immediately bite at their target, using the target’s own attack matrix. Thereafter, at the start of each of the target’s turns, they may roll a save vs. spell. If it succeeds, they control the hands for that round, and may attack with them normally. If it fails, the hands will attack them (50%) or an adjacent ally (50%). If no ally is adjacent, they will always attack their possessor. Should the hands kill their “owner”, they remain active and aggressive, biting at anyone (ally or enemy) adjacent when their deceased owner’s turn comes up.

In the highly unlikely event someone dies under this spell and is raised before the spell has expired, the effect becomes permanent. However, they will have full control over the hands following their resurrection. A remove curse, alter reality, limited wish, or similar, is needed at that point.

The material component is a small pair of metal jaws that clasp shut due to a powerful spring.

Pretty version, as image. I spent several hours futzing with CSS copied from the PF2 template site to try to get it to look good and still be text here, but there’s evidently WP CSS that is not over-ridden by the template’s styles and it’s a mess. So, picture. Text version is below this. 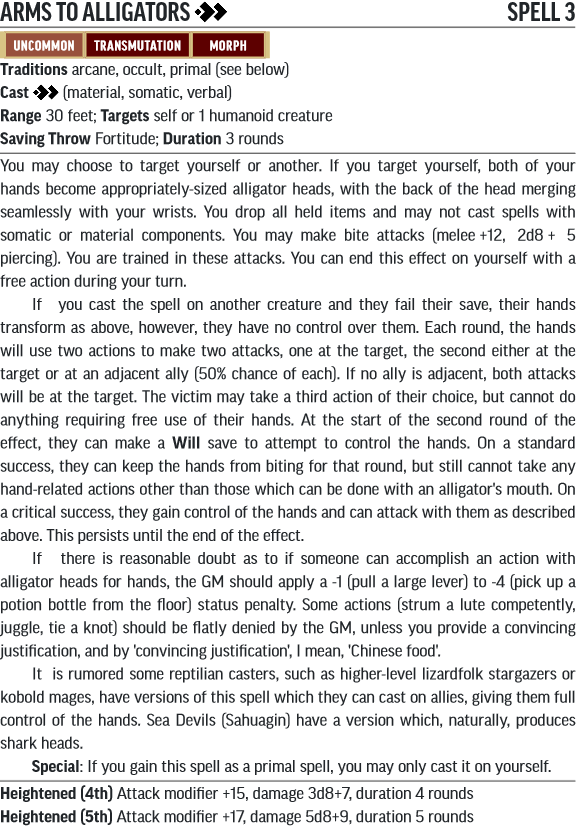 You may choose to target yourself or another. If you target yourself, both of your hands become appropriately-sized alligator heads, with the back of the head merging seamlessly with your wrists. You drop all held items and may not cast spells with somatic or material components. You may make bite attacks (melee +12, 2d8 + 5 piercing). You are trained in these attacks. You can end this effect on yourself with a free action during your turn.

If you cast the spell on another creature and they fail their save, their hands transform as above, however, they have no control over them. Each round, the hands will use two actions to make two attacks, one at the target, the second either at the target or at an adjacent ally (50% chance of each). If no ally is adjacent, both attacks will be at the target. The victim may take a third action of their choice, but cannot do anything requiring free use of their hands. At the start of the second round of the effect, they can make a Will save to attempt to control the hands. On a standard success, they can keep the hands from biting for that round, but still cannot take any hand-related actions other than those which can be done with an alligator’s mouth. On a critical success, they gain control of the hands and can attack with them as described above. This persists until the end of the effect.

If there is reasonable doubt as to if someone can accomplish an action with alligator heads for hands, the GM should apply a -1 (pull a large lever) to -4 (pick up a potion bottle from the floor) status penalty. Some actions (strum a lute competently, juggle, tie a knot) should be flatly denied by the GM, unless you provide a convincing justification, and by ‘convincing justification’, I mean, ‘Chinese food’.
It is rumored some reptilian casters, such as higher-level lizardfolk stargazers or kobold mages, have versions of this spell which they can cast on allies, giving them full control of the hands. Sea Devils (Sahuagin) have a version which, naturally, produces shark heads.
Special: If you gain this spell as a primal spell, you may only cast it on yourself.