(Still About As Belated)

Prompt: Which RPG Have You Owned The Longest And Not Played?

Oy. I’ve been collecting RPGs since the late 1970s. At this point, even if I had a team of gamers at my beck and call, I doubt I could play everything I own before I die. One reason I do my walkthroughs is to partially justify my collection.

But the oldest? Back when I started, I was usually able to run things at least once or twice, because I was a kid with very little money and a lot more free time. My rate of game acquisition was much slower. Also, my exact memory of those early years is a bit fuzzy… did I buy Game X before or after Game Y?

I’m going to go with Space Opera. I bought it at GenCon East (there was only one), and while I rolled up a lot of characters and designed a lot of spaceships, I never managed to get together an actual game of it. (But I did get an article out of it!)

By the way, here’s what my purchase looked like. I currently own the boxed set with the new cover. I have no idea how/when I lost the original. 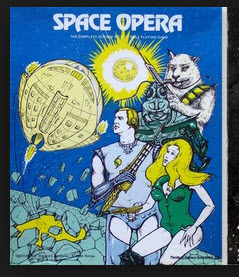 Art by “This Guy I Know”, who was responsible for a lot of late-70s game art.