Monsters From Ali-Loraii To Zoomers

It Looks Like He Had Two Pages Of Monsters In Alphabetical Order, Then Added Another Two Pages In a Slightly Different Style

Bah! Genius Does Not Care For Mortal Conceptions Of ‘Layout’ And ‘Design’! Genius Creates Its Own Order!

Welcome back to anyone actually reading these! This week, we look at monsters… may or may not get through them all, we’ll see. (Edit: We did! It took two days of writing time, but, we did!)

As is typical for the time, these creatures have detailed backstories, complex cultures, and are carefully woven into their environment in a way that enriches immersion in what Tolkien called a “secondary world”.

Also, I’m a Nigerian Prince and I wish to smuggle 20 million dollars into your country.

DM: There’s a cloud of golden light approaching you. You hear the sound of wind chimes.
Foolish Player: Ali-Loraii. No problem, they’re easy to kill. We use a sonic attack.
Wise Player: Wait, you fool! What does it smell like?
DM: (Sighing, annoyed at Wise Player’s wisdom) Like cinnamon and walnuts.
Wise Player: A-ha! This is the rare and majestic pseudo Ali-Loraii. It gains hit points from sonic damage! I use a lightning bolt on it!

Yes, Ali-Loraii take damage from sonic and stoning. They also shoot laser beams (in the ethereal and astral planes, as well as in the material).

Bubble Men: These are transparent humanoid creatures fill with gas. (“You mean, like Fred when he’s been eating at Taco Bell?”) They have no attacks except a “self destruct burst”. The text describes the three types of colored gas they may be filled with (explosive, poison, or sleep) and its effects, but, I notice now, never actually says what bursts them. As a player back in the 1970s, I didn’t even think to ask. Obviously, they burst when attacked. Duh. Now, I wonder if there could be more. Does any damage, even the most minimal, burst them? They have 1+2 Hit Dice… maybe you need to do fatal damage to them? They have no other attacks, so, they just stand there until they explode? Are they an actual species, or something from some alien plane, or a kind of golem? The damage they do — 8d6 explosion, for example — makes them a mid-level threat, at least. (Now I wonder, even more… do all the other bubble men in an area take damage when one of their own explodes, setting off a cataclysmic chain reaction? Wow, that would be nasty in any kind of enclosed area where the players would all be in range… kind of like being around Fred when he’s been eating at Taco Bell.)

These are sort of one-trick ponies, if ponies were transparent and filled with explosive gas, something Ken White at Popehat might consider. Since they have no other attacks, they can be mostly ignored, leading to an arms race of DMs finding ways to make them non-ignorable and players finding ways around it.

Player: Fine, they’re blocking the door? I just shove one out of the way, doing no damage.
DM:That picture you drew of your character has him wearing spiked armor…

Gryflisk: There’s a really cool picture of it in the first book. Just not the first book I used as my primary source, the other first book after Erol Otus was declared to be an un-person. So, here it is. Also: Those of you who think the picture of the monster ought to be, y’know, somewhere near the rules/description of the monster… you are blind, ignorant, fools who are trapped in linear time and two dimensional thinking! 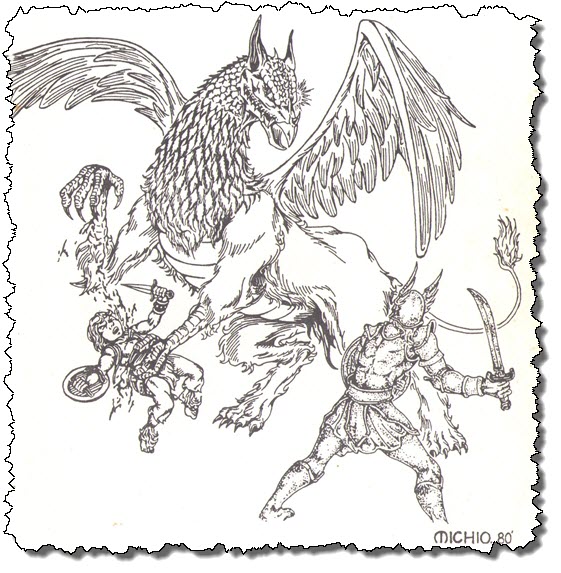 Wrong Book Or Not, This Picture Is Totally Awesome On Every Possible Level

Oh, as if you couldn’t tell from the name, it’s a griffon/basilisk hybrid. See the dude being turned to stone while the hobbit is being turned into an appetizer?

Haggorym: A crossbreed of goblins and neanderthals. Hey, both species live in caves, there’s lots of long cold winters… no need to be judgmental. I think there’s a picture of them in Book 3, too.

Serves You Right For Being Smart!

“A true symbiosis born in evil and horror!” Damn, I love that line.

Is it just me, or does it sound like Dave Hargrave was inspired by those statues outside the better sort of Chinese restaurant? (A statue out front indicates a roughly 25% increase in price (and a 99% decrease in the chance of dysentery) over ‘Mr. Wong’s Eggroll Palace’. It is known.)

Pybra: A python cobra… erm, python/scorpion … so why isn’t it a pypion?… hybrid. With rubies (Real rubies. Valuable.) for eyes. That spits venom. And particularly enjoys the taste of hobbits and kobbits. (An awful lot of species have a thing for hobbits. Makes you wonder how they survived.)

Sluggoth: Not shoggoth. They’re vampire maggots except they’re not undead and… oh, here.

Note: They Do Not Smell Like Honey And Almonds

These things, as described, are grade-a nightmare fuel, that’s for damn sure. I love the tiny hints of backstory. The ‘lesser demon’ saving roll charts are in the Arduin Grimoire, in case you were wondering. I assume the ‘writhing mass of bloodsucking leeches’ is in addition to the insects they command.

Vampusa: These are “nothing more than vampire medusas”. You know, run of the mill stuff. They also had a picture in AG I. The laws of time and space mean nothing, do you hear? Nothing! The original was in the prior article; here’s the revised version: 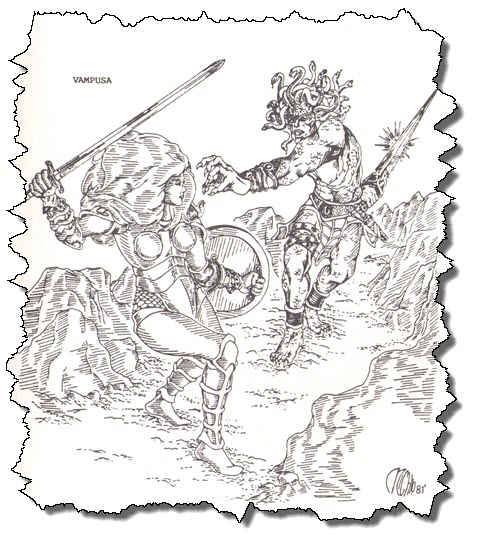 Yup, That’s A Vampusa, All Right

They are often accompanied by moondogs.

Valpyr: Silver balrogs which burn in the astral and ethereal planes, allowing them to damage creatures normally immune to fire. They are also often accompanied by moondogs. You know, I’m starting to think Dave really liked his moondogs.

Windigo: A whirling air-elemental type thing. Pun on ‘wendigo’, obviously. Hey, I came up with the hellephant and dolphiend, who am I to judge? (Those who enjoy such things are invited to look at my own Earth Delta, as the monster book is full of Thermites, the Knights Of The Jade Eye, Acid Ants, Maul Rats, and so on.)

Yaanth: It’s a cross between a bear and an otter, and it’s got three eyes, and it’s got silver fangs, and its saliva can paralyze you, and it’s as smart as a six year kid, and what the hell was Dave Hargrave smoking? Moving on…

“Ha ha, look how they run when I create a monster solely to undermine their core mechanic!”

These are pretty cool and easily adapted to modern systems. Was “Dirty Harry” a PC or an NPC? Are there any non-mad Technos? I love that there’s a little detail like “chalk covers the wire”, because you just know someone would whine that they should have noticed it!

Also note that the name is not in italics. This marks the point in the book — the last entry on a page and the first not in alphabetical order — where Dave apparently decided to just start adding more monsters in a slightly different format.

(A Page Of Monsters)

Bigglies: Hippo-sized St. Bernards with silver-based blood (instead of copper based like most mammals (???)… seriously, it says that, then notes “in this universe” (presumably, the one Dave Hargrave, and less presumably, the rest of us, live(d) in) “mammals have iron based blood”. The “Arduin mammals, except for giant St. Bernards, have copper based blood” didn’t seem to come up again, so I have no idea what’s up with that, as the kids say. They’re named after Clint Bigglestone, a game designer and, I’m guessing, a friend or player of Dave’s. There’s a lot of crossover between Dave’s circle and what would eventually become Chaosium… names like Steve Perrin and Greg Stafford are commonly dropped.

Chaeronyx: A cross between a centaur and a medusa. Man, medusae in Arduin get bizz-ay, don’t they? Of course, you have to keep the lights off. Sadly, they do not appear to travel with moon dogs.

Curiously, This Image Appeared On The Same Page As The Courtesan Class

Kill Kittens: These are tiny little adorable kittens with steel hard fangs and fatal poison that attack in swarms and kill you, hence, the name. They are also illustrated in another book. Perhaps more interestingly, they may have inspired George R. R. Martin, as something very, very, similar appears in his 1985 story, “The Plague Star”. While many ideas are spontaneously generated among multiple creators (please don’t get me started on my classic rant about “Why your ideas ain’t worth shit, so don’t worry about people ‘stealing’ them”), let me note that a)GRRM includes lots of gaming and comic book shout-outs in his work, b)The Wild Cards books were inspired by a game of Superworld that GRRM ran for his friends back in the day, and c)Superworld was published by many of the same people who played w/Dave Hargrave, so there was clearly a lot of overlap. However, anyone trying to verify this will distract him from finishing the next ASOIAF book, so, don’t do it!

Because That’s The Header On The Next Page

Perrinites: These are “with apologies to Steve Perrin”, and are basically hippies. Humanoids with flowers where their hair should be, they can control plants, see through the eyes of birds, and exude paralyzing sap. They like to trick orcs into wandering into the deep woods to be devoured by the Perrinites’ friends, the bears. The stat information (HD, AC, etc) is oddly in the middle of the description, between paragraphs.

Actually, now that I look a bit more closely, all the monsters in the “(A Page of Monsters)” and “(More Monsters)” sections have their stats scattered willy-nilly through the descriptive text, while the monsters on the prior pages followed a more uniform format of “Name, Stats1, Description”. I’d love some of the backstory of how the Arduin books were constructed… I mean, the literal process by which the raw material of Dave’s notes were laid out and turned into these bundles of wonder and madness.

Especially when you consider that the…

Tarrakk: … (the very last monster) is laid out much like the creatures on the prior two pages: Name in italics, followed by stats, but with %Liar (see my earlier article for more on this) added in, something not included in most of the other entries. Oh, what is a Tarrakk, you ask? It’s a cross between a dragon and a horned toad that can (once per day) (italics in original) shoot its 6-60 spear-like spiny scales in all directions, each of which hits “like a light catapult”. (It also breathes fire, of course, up to three times a day, but only every four melee rounds, except when alternate side of the street parking rules are in effect.)

We come to the end of this section. Next time, we delve into several pages of pure mechanics… some of Dave’s house rules and glimpses into the evolving Arduin system. Again, if you enjoy these articles, please share links on appropriate networks… I really suck at self-promotion.

1: Granted, the names of the stats and the order they were presented in varied a bit even on the more “organized” pages… sometimes it was “Speed”, sometimes “Move”, etc. It looks like it switched from “Speed” to “Move” halfway through the alphabetized list… as if Dave typed up some of the monsters one day, then went back and typed the rest, but changed his mind/got confused over what term to use as he transcribed his notes. Believe me, I’ve been there. There’s nothing more annoying, as a writer, to realize you changed a character’s name halfway through the book, or, even worse, transposed two characters so the guy who was killed a page back is now the guy fleeing down the hall, while the guy who’d originally been fleeing down the hall is lying dead in the other room. Across the decades, and the boundaries between life and death, I feel a connection.