Two weeks ago, I mildly chided Dave Hargrave for having a few pages containing but a single chart or table, surrounded by a vast sea of emptiness. Across time and space, Dave heard me, and made sure the material covered in this week’s installment would be from densely-packed pages of small type. Y’know, I don’t remember the type being this small when I was 16. Clearly, someone has, in the ensuing decades, sneaked into my house and replaced my copies with small-type versions, meticulously replicating every duck sauce stain to lull my suspicions. No other explanation is possible.

From the prior page (in the previous article) on Random Lifestyle Changes, we jump right into vorpal blades. Well, not right into. That would be messy. They’re the start of a list of important MODIFIERS and RULES for various THINGS, with a LOT of KIRBY CAPS to add EMPHASIS.

DM:”OK, that’s 35 points to Bronk The Queasy, and 35 to his plate mail.”
Player: “Nuh-uh! The rules say armor takes damage as the player does. Bronk took the damage, not me, so the armor is fine!”
DM: “Have it your way…” (Proceeds to hit player upside the head with 1e DMG. Player is lucky Ptolus or Hero 6e are still decades in the future.) “So that’s about eight points to the armor, then. OK?”

And this, folks, is why we ultimately have rules like this.

Article writing on hold due to orange cat in need of snuggles.

(Jeopardy theme plays… OK, cat has received orders from orbital satellite telling him cuddle time is over, now it’s time to meow madly at an invisible spot on the wall. Back to writing.)

Also, we have a “simple” explanation of pumping mana. (Read the preceding two words in a Bavarian accent.)

So, each die of damage costs five-thirds of a point of mana?

“All weaponry that leaves the hand of the firer (such as arrows, bullets, rays, beams) and have (sic) a listed maximum AC penetration/ranges, will attack at plus five (+5) all AC’s (sic) it can penetrate!”

Got that? Good. There will be a quiz later. Remember, this only applies if the maximum is listed. It does not apply to unlisted maximums! Get it straight, people, I’m sick of repeating myself! Listed maximums only! 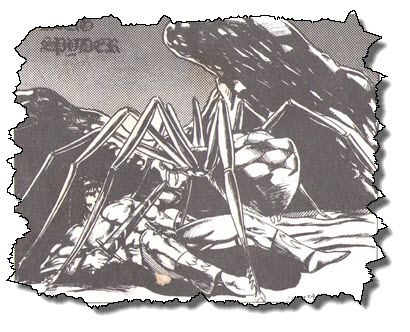 “A dagger +1, a longsword +1, + 3 against orcs, and a phased plasma rifle in the 40 watt range.”
“Hey, just what you see, pal.”
(A conversation I assume occurred at Dave’s table before it was ripped off by Cameron.)

Since we just discussed those weapons which have a listed maximum range, it is only fair we present them. 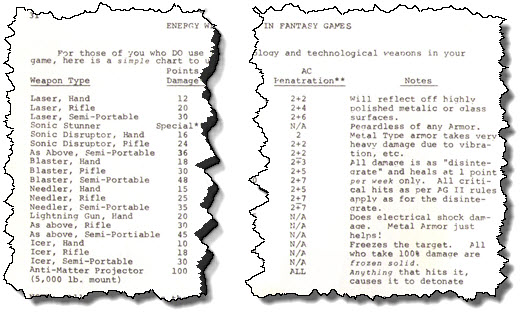 I Felt The Weapon Names And Notes Were The Most Important Parts, So, I Ended Up Cutting Out The Listed Maximum Range. Oh, The Irony!

Evidently, in Arduin, anti-matter projectors are made of the same stuff they make cars from in action movies. Or maybe “hits it” should be “it hits”, and “causes it” becomes “it causes”? Hey, I’ve found reversed booleans that have hidden deep in code for many years. It’s possible!

“Metal Armor just helps!”, but if you were expecting rules for how much it helps, you clearly haven’t been reading these articles for very long.

Ah, now we get to the good stuff… the phat lewt, as the kids say. What? They haven’t said that for 20 years? How about bling? Do they still say bling? Whatever, I’m not going to spend time researching it.

Amulet Of The Amazon Mother: A silver scrotum and phallus impaled by a golden arrow, this gives +3 to any amazon’s Str, Dex, and Agility, as well as a smegload of other bonuses for use when attacking men. (cough) issues (cough).

Conjure Crystal: A crystal ball that can, in addition to the usual crystal ball stuff, show illusions and, once a month, summon an elemental. Because why not?

Food Of The Gods: Causes teenagers to grow to giant size and then get mocked by Joel, Tom, and Crow. No, wait. This consists of mead, manna, and ambrosia, each of which has a 50/50 chance to raise or lower physical attributes, mental attributes, and level, respectively, by 1d8 each. You can eat it only once. It also “erases all previous deaths”, so that the maximum death counter resets. I repeat: The “revolving door afterlife” is not a recent invention!

Gauntlet Of Gripping: Not going to go there.

Horseshoes of Traveling And Leaping: Like the classic ‘boots of springing and striding’ but for, you know, your horse. I don’t know about Dave, but in my games back in the day, this would lead to some hilarious slapstick, followed by arguments about what you need to roll to stay on a horse, followed by a long digression involving saddles and alchemical glue.

Ring of Djinn Power: Often paired with the Ring Of Itty Bitty Living Space. Anyway, turns the wearer into a djinn for an hour, up to three times a day, with an increasing chance of the wearer becoming the djinn in the ring. So, first thing you do the first time you use it: Wish that the curse on the ring is lifted and you can use it as much as you want without consequence. Then, get into a two hour debate with the DM over the exact wording and interpretation of the wish.

Ring Of Righteousness Resistance: Provides +4 to saves vs. harangues by whiny millennial activists and elderly fundamentalists. Also +2 to saves against non-chaotic clerical magic and +3 to saves against conversion.

Rose Colored Spectacles Of Delusion And Untrue Sight: Causes the user to see bad things as good, good things as bad, think broccoli is actually a type of food, dislike bacon, etc. They “effect” only the user, who likes them so much they won’t take them off.

Ruby of Runaway Regeneration: Not to be confused with the Amulet Of Anarchistic Alliteration, this grants regeneration, but the body part grows back randomly… your leg might regrow as a horse’s leg, for instance. There’s no random table provided; the DM must adjudicate the effects according to how much Chinese food has been provided.

Staff of Stupidness: I am just assuming there was a cleric in Dave’s game he really didn’t like, and made sure he found this…

I Mean, There Aren’t Even Rules For Some Of The Effects. Dave Must’ve Hated That Cleric.

Also, “stupidness” isn’t a word. I feel obliged to point that out.

Wand of Wizardry: Usually about 25% longer than regular wands. No, that’s not me being funny. (“You’re never funny!” “OK, that’s not me attempting to be funny. Happy now, imaginary peanut gallery?” “For the moment. We’re watching you.”) That’s actually what it says. (/me begins singing “A Wizard’s Staff Has A Knob On The End”) Oh, in addition to providing fodder for single entendres almost forty years later, it provides “any three single uses by type. For example, cold, paralysis, fear.” Uhm… OK. I can almost make sense of that… maybe it means you can shoot three cold rays, or three paralysis rays… but does that mean you pick a type, use it three times, and that’s it, or you get three cold, three fire, three acid, three sonic, three laser, three-as-many-different ‘types’ as you can con the DM into letting you come up with?

And so we end for now… next time, we delve into new spells, of which there are many, and at least two contain the word “aphrodisiac”.