Another Ancient Game You Probably Saw Advertised In The Dragon

But Which I Somehow Acquired. No Idea When Or How.

With This Exciting Action Scene On The Cover, How Could Customers Resist?

It is a little-known fact that FASA’s famous “BattleTech” game was originally released as “Battledroids“, until they got a letter from a certain director reading, in part, “Yousa be a violatin mesa’s trademark on droidsa! Yousa be changin thats quick or bombad lawyers gonna sue you maxibig!” The company assumed the odd phrasing was legalese and did not realize they were privy to a glimpse into the dark future of what was currently a beloved movie franchise, so “Battledroids” became “BattleTech”, and the rest is history.

The game I am discussing, called simply “Droids”, was published two years earlier (in 1982) and never attracted Mr. Lucas’ wrath, as far as I know. Really, the entire preceding paragraph is mostly irrelevant, I just wanted to a)verify that I did, indeed, remember seeing a game called “Battledroids” at the Compleat Strategist in NYC way back when, and, b)Get in some decades-late digs at Jar Jar. (But does Rogue One look awesome, or what? Anyway…)

“What Mission? What Are You Babbling About?”

The basic premise of Droids is that the PCs are droids, a naming convention to be adopted by White Wolf a decade or so later. There are no humans, animals, or other life forms to interact with. It’s droids all the way down.

“I’m Only A Droid, I’m Not Much Good At Telling Stories” 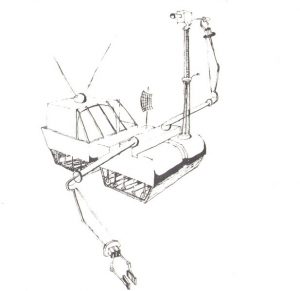 In the very earliest days of RPGs, the first 2-3 years of their existence, there was a point where the line between “skirmish wargame” and “RPG” was much blurrier than it is now. We, as humans, like to fit things in boxes, to categorize, define, name, and limit, enabling us to mentally manipulate complex clouds of concepts as if they had a single handle we could grab onto. “En Garde” by Game Designer’s Workshop (I think they went on to do some kind of space game) was one example. TSR’s “Warriors Of Mars” was another.

Droids, nearly a decade after D&D’s release, and marketed as an RPG, has some aspects of this. Despite it requiring a Referee and including a “Sample of Play” in typical style, the book consists almost entirely of rules for combat and for creating droids to engage in combat. There’s about a page of material suggesting there might be organized Droid societies, but it’s very sparse. The game provides content for the very core of RPGs: Go somewhere, kill things, take their stuff, but is sparse on the “kill things”. There’s three generic sample NPC droids, and two more in the scenario provided (“raid the abandoned army base”). The “stuff” includes a small list of items not available at character creation, from vacuum cleaner attachments to movie projectors, but it is diverse enough to offer some inspiration for additional goodies.

A post-human world inhabited entirely by abandoned artificial intelligences is a fine setting for adventure, but all the work in bringing this to life, including any mechanics for anything other than combat, would be to the referee.

So What’s In The Book?

A lot of charts, tables, and descriptions of various weapons, power plants, mobility mechanisms, and armor, along with rules for using all of these things, a short scenario, and an appendix with summarized charts.

Also contained: A layout completely reminiscent of Traveller. I’d say they borrowed the same Adobe templates, but this is 1982, and “Adobe templates” back then meant “plans for building homes in the southwest”.

There’s not any kind of list of archetypes or “typical” droids, or a real sense of what you’re going to do besides “explore ruins, scavenge parts”. The advice on building a droid actually steers you away from archetypes, encouraging you to build well-balanced units. Not bad advice, at all, but RPGs tend to work best when there’s a team of characters with mixed strengths and weaknesses. More relevant for this article, I need an idea, stat.

Somewhere in flipping through it, I saw there were options for gasbags. The idea of a blimpdroid appeals to me greatly. Perhaps it was created originally as a silent spy, able to drift into enemy territory with a minimal signature. It should have some self-defense capacity to take out attackers, and ideally a backup ground-based movement system. In the campaign setting, it would work as a scout/spy, locating places to forage, relying on better armed- and armored- allies to do most of the killing once it brought back the intelligence, but not helpless in a fight.

I have 20 CP to start with. CP are “Construction Points”, of course. Seriously, you need to be told that? Wow, my imaginary readers are dim.

“PC” is the measure of whether I continue to internalize my oppression by using the human supremacist term “droid”, or if I refer to myself as a post-organic ferro-American. Or, it’s “Power Consumption”, the measure of how much power each of my components eats. Well, why can’t it be both, huh? Don’t force me into your binary categories!

“BP”, or “Bulk Points”, sort of combine hit points and volume on a unit-by-unit basis.

Based on the character sheet provided, I’m going to need a spreadsheet to keep track of things. Damn, it’s been a while since I fired up Excel for RPG purposes. Getting a bit giddy, here.

The first thing I’m asked to spend CP on is transport. There’s a lot of choices, but keeping with my character concept, I’m starting with “Propelled Balloon”. The rules are fairly detailed, including time to inflate or deflate and how far you can fall while it fills. (800 meters, so, it’s pretty much useless if you fall from anything smaller than the Empire State Building.) I’m also taking wheels for my ground transport.

Note that each transport unit can support 100 BP, and different types of transport units can’t be combined. So, if I go over 100 BP, I will need more wheels and balloons.

Not the ability to bribe, blackmail, or intimidate, but rather, arms. There’s only three: Repair, Maintenance, and Lifting. Not sure what the future looks like in terms of BP, PC, CP, etcP, so for now, I’m going for a single Maintenance arm, which can do a little repair and a little lifting.

(You may notice the system does not assume a humanoid default. The droids produced by this game will resemble real-world robots much more than space opera ones. You can probably build a humanoid, but it’s not a baseline and there’s no indication non-humanoid droids suffer any notable disadvantage in terms of interacting with the world.)

Power units have a negative PC… in essence, they reduce your total power consumption by a certain amount. Power plants are the best (most expensive) and can be overloaded at a risk of explosion. Solar cells are tempting, but I plan to operate at night. (I could combine them with a rechargeable battery, I suppose…) Nah. Going with standard power cells.

Power can be allocated to units on as-needed basis. Assuming I may need to move and pick things up at the same time, I will need 4 units of power, minimum. So that’s 4 cells, which will cost me 4 points. Hmm. Let’s kick that up to 7, to allow for what I suspect weapons and sensors will cost. Or, for 5, I could get a power plant. Hm. Power cells are 4 BP each, while a plant is 9, total. This means, in theory, I can lose a few cells and still have some operating power, but a plant is putting all my eggs in one fusion-powered basket. Hm. Let’s go for plant. If I have CP left over, I might get a cell or a battery for backup.

Or, sensors. For vision, I am going with the most expensive, the tri-camera, which also gives me ranger-like tracking capability. It fits my character concept.

CP are starting to get low. I will skimp on the other sensors, going for the most basic sound and communications gear.

Modules are basically programs. You buy an interface, which, I think, determines how many module you can load at once? Or something? The combat modules are insanely expensive — 10 CP for the lowest-level one. The others ain’t much better. I’ll just pick up an M1 Interface for now, in the hopes of finding a data module later on.

It Costs How Much?

How About A Pointed Stick?

Seriously, the cheapest weapon is 4 CP. I’ve got like 2.1 left. Time to make some adjustments.

Let’s drop the wheels and go for legs. That frees up just enough CP for an energy cannon and a single 10-shot power pack. Hey, that’s 10 times more attacks than a first level magic user gets!

I can’t afford armor, ECM gear, or a spotlight. Sigh.

The Naming Of Names

Well, what should I call it? The game explicitly offers an eclectic naming scheme, noting a droid could be named anything from a string of letters and numbers to a computer or industrial themed name. While it’s a year or two late, relative to the publication date, I will go with LASERBEAK for my character.

LASERBEAK’s greatest weakness, mechanically, is its lack of armor. The guidelines caution against this, but something’s got to give. Hopefully, it can stay out of danger until it can scavenge some. It also has only enough power for 10 shots; an additional power supply is needed.

Here’s the final character summary. It seems appropriate I mostly just needed to copy over part of my Excel sheet… 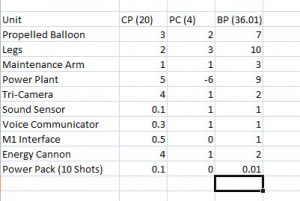 LASERBEAK. It Seems Appropriate This Game’s Character Sheet Is An Excel Screenshot

That last item sort of sums up my thoughts on the game, and perhaps why it did not ignite any kind of spark that I know of. “Functional” is the watchword of Droids. It offers some tools for a unique (at the time) setting, a post-human post-apocalypse, but does very little to inspire. The text describing the various options is perfectly adequate, and that’s it. The art is decent, but it’s all static images of various droids with no background or action going on. The sample of play consists of Player One and Player Two talking to Referee and… looking at things. Shining lights. Examining a hole in a fence. Yay.

So, that’s Droids. Tune in next time, when I look at… I have no idea. I’ll poke around the bookcases until something catches my eye.

If you like the idea of AIs in a post-apocalyptic (but not post-human) world, you might enjoy this….