But first… a digression!

I was looking through my copy of Greyhawk to see if a particular spell had entered the D&D canon by then, and I noticed something I’d never noticed before, despite having read GH multiple times through during the years when it was relatively current. (In the late 1970s, it was a year between publication of each volume of AD&D, so we had to cobble together working rules out of a mix of what had been released so far and bits of older editions.) Check the “Meteor Swarm” description:

Who is Jim? Sorry, (Jim!). Jim Ward, probably, but I’m guessing. Well, OK. So, why the call-out and exclamation point? It’s a rather Hargravian touch in a Gygaxian work. Anyone know the secret backstory?

As noted last week, there’s already been a section of notes on clerical and healing magic… and so what? The original Arduin trilogy is a glorious exercise in extemporanea. Here you go:

Dave’s Players Let Orcs Get Away? For Shame! They Have Loot On Them!

It’s interesting, because this implies “evil healing” was an ongoing point of contention. There were a lot of those. Anyone who thinks “holy wars” over the interpretation of rules is somehow a new thing (undoubtedly beginning with the edition after the one they started with, which was a perversion of all that is good and holy) is kidding themselves. Gaming culture grew out of a blend of wargaming culture and SF fandom, both of which have been full of people arguing violently over trivia since their inception.

(That’s the header for this page.) 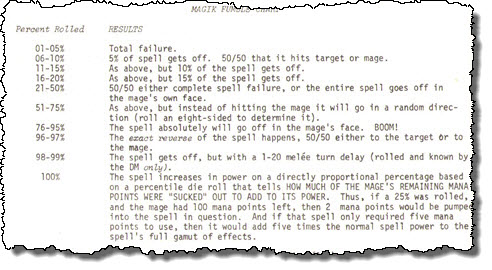 What’s the exact reverse of a fireball? An iceball, or a “healing flame”? How about a Summoning spell? Does the caster get summoned? Does it summon things hostile to the caster? Yeah, I know the catechism: “You don’t need icky rules. Reasonable people will work out an answer. If you get into arguments, find better players.” It’s nice to know that a)Reasonable people never disagree on what the “reasonable” answer is, and b)There’s an endless supply of mature and well-adjusted people out there who want to spend 6 hours on a Friday night crammed around a kitchen table pretending to be elves.

Plus 1 Die Per Magik Plus Over One? What?

Maybe this refers to “competence”, so a “fire competent” magic user does two more dice of damage?

Continuing the theme of “high density information dump”, we move on to combat.

Go Ahead. Tell Me How Complex The AOO Rules Are.

And speaking of opportunity…

It Knocks But Once

Now, this is the educational portion of our program. Why did rules like this appear? Because they were necessary, and because the “state of the art” at the time was, let us be frank, primitive. (No, that wasn’t frank. Frank is “pretty execrable, actually”. The rules, I mean. Frank’s an OK kind of guy, really. Once you get to know him.) The kinds of actions that commonly occurred in dungeon crawls — “I stand up”, “I wait until the orc pokes out from behind that wall, then shoot him” — had no real mechanical support. The “reasonable” people all had very different ideas about what “should” happen, based on if they got their ideas about “real” combat from reading comics, watching movies, or playing wargames. (The fourth group, the SCAers/other recreationists, tended to have a good knowledge base, but also were even more prone to cluttering things up with endless minutiae that often fell below the level of resolution of the highly abstract D&D system.) And, people being people, there was often a bias towards whatever interpretation was most favorable at the moment, then flip-flopping when it became unfavorable. So, some kind of “Look, this is what we’re doing, period!” rule was required… but the idea of a coherent system where there was one dominant or universal resolution mechanic, with each needed rule being mostly a determination of the inputs into that mechanic, was far off. So, each action or circumstance got its own rule, often with its own special supporting mechanics. (I’m not sure what the “emergency turn chart” is… was that in an earlier book? I didn’t see it when I flipped through the Grimoire just now, and it’s not in the forthcoming pages in Skull Tower…)

Even today, there’s a tension in game design between generic, easily applied rules that ignore many of the small details that aid immersion, and piles of modifiers and special exceptions that slog the game to a crawl as you try to squeeze one more +1 out of the mechanics. (“But I’m wearing hard boots! Doesn’t that give me DR 1/- vs. caltrops?)

Moving on, we get to weapon breakage rules. There’s a big chart of percentages cross-indexed by attackers strength and weapon plus and armor types, but I’m going to skip that and focus on the explanation… 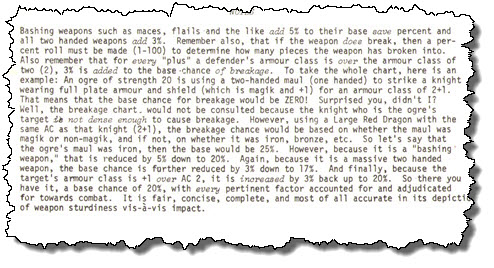 “Surprised You, Didn’t I?” Is A Phrase Rarely Seen In Modern Games

Yeah, you see, while the chart and rules include “every pertinent factor accounted for and adjudicated for”, the times when you are supposed to use it are not nearly as clearly spelled out. How do you know if a monster is dense enough to damage a weapon? Hey, that’s for you to figure out. Dave can’t do everything for you, man.

The next page discusses weapon groups and proficiency bonuses — all pretty well done, if not entirely consistent with similar discussions elsewhere, but, consistency is the hobgoblin of little minds, and in Arduin, hobgoblins could be wearing +2 plate armor and carrying flaming longswords, so, there you go. There are also rules for learning new weapon proficiencies, which are fairly harsh — basically you need to tell your “resident DM” (this was in an era when players regularly moved characters from table to table) that you are doing so, and you need to earn experience using only that weapon equal to the amount needed to gain your next level, but said XP doesn’t actually count towards that level game. (“Trade XP for abilities” was a fairly common experimental mechanic in this era, but it often failed because it used static amounts of experience, which meant that the cost became nominal as experience gain increased. Dave Hargrave addressed that with this rule.)

I do need to comment on how much of the preceding remains echoed in modern incarnations of D&D. Rules for standing (and the risks thereby), as well as the effects of being prone. Rules for held actions and reactions. Rules for casting failure if the caster is damaged mid-chant. Rules for sundering weapons and armor. Rules for weapon specialization and learning new weapon skills. All of these are now core.  Dave Hargrave’s instincts towards what rules were needed were rock-solid, even if some of the design work was a little spotty. He had far too many ideas, visions, and creations to give any one of them attention and polish… but the world would be a far poorer place if he’d released a tenth as much material, having taken ten times longer to refine it. The raw creativity more than compensates for the rough implementation.

Next time: More rules! Seriously. I told you there was a lot of this to go through.