I Got Your “Rulings, Not Rules”, Right Here, Pal!

In this part (and almost certainly the next part, since there’s no way I’m getting through all this in one go), we are covering Dave’s rule additions, alterations, addendums, and alliterations. (Yeah, I know ‘addendum’ is the plural of ‘addenda’ and there’s no such word as ‘addendums’. It’s poetic license. Gimme a break.)

We get a page of “Dungeon Signposts”. Oddly, these are not “Turn Back, You Fool!” or “DM Hasn’t Finished Mapping This Yet”. These are a useful set of symbols for, presumably, mapping… and clearly intended for hand-mapping without intent to photocopy or reproduce. 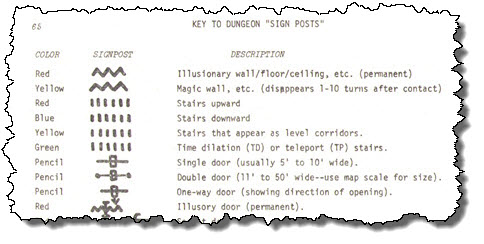 Stairs That Go Nowhere Just For Show Are Colored Purple

The use of color is interesting. Most similar guides assumed the DM would be using a Number Two Pencil and that he/she would be photocopying the map, if they had access to their school or workplace’s copy machine. Dave evidently had a more artistic bent. I’m not sure using color instead of different symbols conveyed more information, frankly. I’d always forget if red meant ‘up’ or ‘down’.

At the bottom of the chart is a note:

REMEMBER, THIS DUNGEON IS ONE WHERE YOU HAVE ROOM TO EXPERIMENT, SO DO SO!

It’s not clear what “this dungeon” refers to. I believe the meaning is “In the Arduin-inspired dungeons you design, you are not bound by the puny rules of mortal men — let your imagination run wild!” Assuming this interpretation is correct, we’re seeing early signs of a long-running, still-ongoing, struggle in D&D between the wild&woolly world of galactic dragons and psychic centaurs, and the stoic, plodding world of human fighters and pouring water on the floor to detect pit traps.

Send In The Clones (And Golems, And More…)

And the fact the first item in “various rule changes” is “Clones” tells you all you need to know about which side of fun/boring divide Dave fell on. In his campaign, the use & abuse of clones had clearly reached egregious levels, so, rules were needed. I am 99% certain most of these rules came about due to players looking for loopholes. (A DC 30 Perception check… well, back then, you could find loopholes on a 4 or less on a six sided die, except for Power Gamers, who could find them on a 7 or less on an 8 sided die.)

Summarized, clones take one month to mature per year of the character’s age, and if the character dies before that (activating his clone), there’s a proportional loss of ability, though it’s not clear if this is based on level or total XP or what. Also, if you have more than one clone at a time, they will both go slowly insane and seek to kill each other and the original. Something tells me some of Dave’s players were setting up clone banks to continually replace themselves. I wonder how many were commie mutant traitors?

Then we have a few rules for golems, which don’t have anything to do with the prices and rules earlier in the same book. Go figure.

Next up, a very interesting paragraph about casting permanent spells on sapient magic items… that this came up enough Dave had to write rules for it says a lot about his campaign.

Not sure why this is in the “rules changes” and not “monsters”… I ought to know not to ask such foolish questions by now.

I’m assuming (hoping) that their AC is 2+their Dexterity modifier to AC, because 2+16 would be -14 (if you have to ask why, you’re not old school), which is pretty ridiculous, even for Arduin. They’re followed by Archangels, which are even nastier. Lastly…

Of COURSE Angels Are Vulnerable To Anti-Matter!

I like that angels can only haste themselves if their opponents are, too. Fighting fair is important!

In another moment where he anticipates design trends that won’t become part of D&D until third edition, Dave has scaling saving throw difficulties for spells…

How many spells over 11th level are there? In Arduin, a good many, I suspect.

Stop! In The Name Of Time!

The Doctor should say that. Totally.

I noted earlier that time magic seemed to be a big thing in Arduin, and as further evidence, here’s some more rules on time stops. (Time Yields and Time Slow Children At Play may be covered in a future book.) To wit:

Got all that? Good. Now, let’s discuss Pathfinder grappling rules. Hey! Come back here, you coward! God damn it, I played freakin’ Aftermath when I was sixteen! A few rules didn’t scare us! Quitters!

Note The First: Myspellyngz Are Majikal

Having left behind rules on such mundane, normal topics as time stops, clones, and angels, we come to “Notes On Magik”.

A brief note (as it were) on the layout and formatting… this page is a delightful hodgepodge of non-sequiters, jumping from ice storms to elves to wishes to time stops (yes, again) with gay abandon. While the previous pages at least had a header line between each leap in subject matter, this page doesn’t, except for the one time that it does. Really, it’s a large part of the charm of these books, somewhat lost in the marginally more professional sequel volumes published several years later.

Even For Arduin, This Is Confusing…

So… what does ‘simultaneously’ mean? Round by round? Per fight? Per adventure? And does this apply to every form of multiclassing, or does it mean everything in Arduin except elves is single-classed? This reads like a very early house rule from the first year or two of D&D… the Greyhawk rules changed how multi-classed characters worked quite a bit, beginning the end of the ‘race=class’ model that fell apart as soon as it became evident that new classes would appear with great frequency. (The original OD&D rules had elves acting as either magic-users or fighting-men on an adventure-by-adventure basis; by Greyhawk, this had evolved to “split experience”, which became the standard until 3e.)

Wishes: Limited wishes in Arduin are 12th level(!) and full wishes are 25th level(!!), Also, wishes don’t work outside their native universe. Uhm… OK. Not really sure what that means… does that mean if I’m wearing a Ring of Wishes, it only works in the universe I found it in? Or that a high-level caster can only cast a wish spell in his home universe? It just seems a very odd rule that would have limited applicability… which means there’s probably a story behind it, somewhere.

Conjuration: Spells that “conjure” things, such as “Wall of Fire”, subtract their level from the caster’s Dexterity to determine when they go off in a round. Generally, most groups I know of ignored “dexterity countdowns” and similar things. Granted, they make more sense in Dave’s six-second rounds than in the standard one-minute round, but still, they were a real pain if you had a large combat, especially if the monsters all had different dex scores. Even in today’s games, with individual initiative, you roll for groups of monsters at once, so all the orcs attack on the same count. I appreciate the greater tactical depth offered by ‘countdown’ systems, and the choice between a low-powered ‘fast’ spell and a high-powered ‘slow’ one helps keep lower-level spells meaningful in the later game, but the negatives in actual play always outranked the positives, in my personal experience. (One of these decades, I’ll write something about rules I love in theory but dislike in practice.)

(The dexterity countdown rules were in The Arduin Grimoire, BTW. None of this is mentioned or referenced in this part of Welcome To Skull Tower, of course. If you’re Old School, you had the rules memorized and didn’t need to be reminded where they first appeared.)

Competence: Illusionists are light competent, Rune Singers are sonic competent, and Rune Weavers are ritual competent. Just in case you were wondering.

Time Stops: Yes. Again. There’s some fluff about why time stops don’t affect wraiths (and similar non-corporeal undead), but do affect energy, and then a note that for the caster to breathe in a time stop field, they have to keep moving, as only the air molecules touched by their aura are breathable. “Move or die”, the rules say. (So if you cast time stop in a zone filled with poison gas, you’ll still breathe it as you move in the zone… interesting….)

Following is “Notes On Clerics And Clerical Magik(sic)”, not to be confused with the other notes on clerics and clerical magic (I’m not sic) we covered a few articles back. So, this is probably a good stopping point for now. Next time: We delve into the notes, and probably magic (I’m feeling much better) fumbles, combat rules, and weapon breakage!