Fields Of Famine, Stones To Spiders, and Heavenly Umbrellas

Also: Cleric Reaction Rules, Or, “Out Of Network Cures Are Not Covered”

Here we are, part X. About halfway through Skull Tower, which means, halfway through the original trilogy. (Don’t worry, I’ve got lots more related stuff, including Arduins 4-8 (I think I missed 9…), some Dragon Tree press things, and more.

We (probably — remember, I never know at the start of these things how they’re really going to turn out) finish the spells today, and the clerical “reaction rules” — does the cleric of Benevolar The Just And Good heal the follower of Thrugorth The Bloodfanged? Roll a D20!

Balkwyr’s Basic Ritual Of The Calling Of The Lesser Winds: Other than the obvious jokes that 14 year olds will inevitably make about this spell, it’s pretty useful: It will blow gasses away (stop giggling!) at 10′ per turn. As you might recall from earlier articles, dungeons in Arduin are filled with all kinds of vapors, mist, and fogs, especially when the orcs have their chili cookoffs. (Fine, my inner fourteen year old comes out a lot.)

Khermal’s Puissant Color Of Mystikal(sic) Magic: Remember, folks, a ‘k’ makes it more mystikal! Anyway, this is basically a prismatic wall… at third level. It’s not clear if the spell creates all the different colors noted (blue causes paralysis, red does 2d20 heat, black causes blindness, etc.) or if the druid picks one. In the first case, it’s insanely powerful for third level. In the second case, it’s more reasonable, but still ridiculously flexible. I wouldn’t memorize anything else for that level!

Tadraen’s Spell Of The Field Of Famine: Destroys all plant life in a 30′ (+5′ per level) radius centered on the druid. No word on if this affects mobile, hostile, plant of the sort that infests every D&D-type forest, making walks in the woods high-risk affairs. It does say “all plant life”, but as a DM, I’d be loathe to let a druid exterminate my ent army in an instant with a fifth level spell. Also, the resulting cloud of choking, blighted dust has a 10% chance of killing anyone who breathes it… including the druid’s allies if they’re in the area, and, erm, I’d guess, the druid themselves… oops…

Tyr’s Spell Of The Heavenly Umbrella: Vital if your character wants to break into an impromptu rendition of “Singing In The Rain” (they may need the Boots Of Astaire for that, though), this spells does “what it says on the tin” — it creates a broad dome above the character that is immune to liquids falling from above. It also repels slimes and oozes. After Knobby Foot has already revealed the trap that pours acid from the ceiling, this spell can get you though it (be nice and mop up what’s left of him on the way… you can take the Raise Dead costs out of his pay). Since it only covers the area above the caster, the spell notes “some might splash onto him if he’s not careful”, which instantly leads to “how do you tell if the cleric is being careful or not?”

Stanson’s Stones To Spiders Spell: Yeah, I’ll see your “sticks to snakes” and raise you “stones to spiders”. Coming soon: “Sand To Centipedes”, “Sod To Skunks”, and “Surf To Stegosaurs”.

Sorry, That Sword Through Your Gut Is A Pre-Existing Condition

Ah, one of my favorite parts of the Arduin experience… numbered notes and RULES with IMPORTANT words in CAPITAL letters. These are an assortment of Dave’s rules, guidelines, and declarations regarding clerics, healing, and anything else he happened to think of while typing these up.

All SPELLS that HEAL take one minute per point of damage to fully heal.: Wow. That’s a pretty major shift from ‘bippity-boppity-boo, you’re at full hit points’. It makes in-combat healing via cleric spell nigh-impossible. (Dave used 6 second rounds, you will recall.) So every ten rounds, you get back one hit point from a spell. I repeat: Wow. How anyone in Dave’s games lived to second level, I don’t know.

Actually, never mind combat healing at all: It then says that spell/device healing requires the target be motionless through the entire process.

Also, you can only heal up to your Constitution times your level per day. So keep track of the total wounds you’ve taken, not just your current HP score.

Clerics wear/wield armor/weapons appropriate to their deity. Those who say “Well, duh” clearly don’t know Old School Gaming, where all clerics, no matter their god, were forbidden from using edged weapons. It rapidly became a running joke. It was done, I think, to prevent clerics from pretty much totally eclipsing fighters, because they already got full armor proficiency, and if they had access to all the good magic weapons (which were all blades), plus spells, there would be even less reason to play a single-class fighter than there already was.

Now, we get to the fun part… what happens when a chaotic evil dwarf thief asks for a healing spell from the lawful good cleric? You roll some dice, of course!

If You Like Your Deity, You Can Keep It…But You Get a +6 If You Don’t

This is followed by a few more modifiers, including fairly important ones for alignment — the more different the alignment, naturally, the more extreme the penalty. Evil clerics charge double for the same bonus. +6 bonus if the wounded person promises to convert, but a -10 penalty if they then fail to follow through.

I’m Sorry, That Procedure Is Not Covered

I’d modify a bit: If the result is negative, the cleric actually casts an “Inflict” spell of the same type as the requested “Cure”. I’d eliminate the “every time” part, too, because that ignores how situations (and alignments) might change. Also, does “Will do it free” means that if the target paid in advance to get positive bonuses, they get their money back?

Some people reading this might wonder as to the necessity of this chart. “Why not just roleplay it?” Well, at the time, a lot of players were not exactly amateur thespians, though they did often fantasize about them. (Badu-BUM!) Trivial things like “alignment” and “background” were often ignored in favor of treating characters more like modern video-game avatars, simply a stand in for the player. Thus the question of “Will the Cleric of Good heal the Anti-Paladin?” was usually answered by “Did the guy playing the anti-paladin chip in his fair share for the Chinese food?” (Usually not, ’cause the kind of people who played anti-paladins were usually the kind of people who were generally asshats.) Likewise, random charts like this helped avoid at least a few arguments with the DM over why he was being “such a jerk” by not having the High Priest of Benevolar heal the party from the damage they received while looting the Temple of Benevolar’s orphanage fund. (And, really, it’s sooooo stupid they’d still be pissed off. After all, we burned down the orphanage last game, so, it’s not like they need the money!) 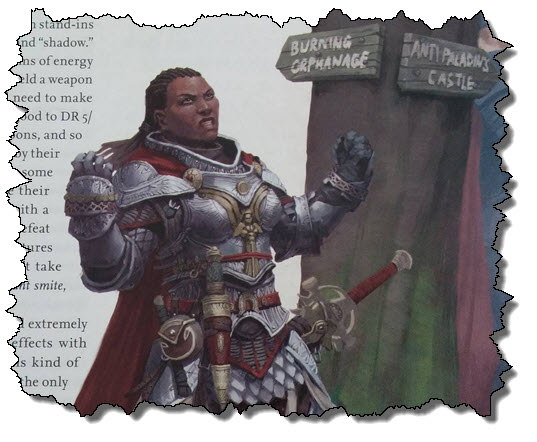