Maybe Some Other Stuff. Not Sure. Probably Won’t Get Through The Spells.

It’s been about two months since the last post in this series, though, surprisingly, there’s been a bunch of actual content added anyway… four posts, including the bloodmouth carnist, a cursed blade, and some spell variants, all for Pathfinder. I wasn’t deliberately taking a break from this walkthrough; I have moved, and I finally found my copy of Skull Tower earlier this week. So, here you go. Back on track.

With no introduction, we jump right into “Mages Spells”. As usual when I do these sections, I’m picking out (or picking on) a few highlights, not exhaustively reporting on the whole thing.

Trenkole’s Basic Web Spell: Creates webs, with rules for how many creatures of various hit dice can be held. Unusual in that it more-or-less duplicates an existing spell, already part of other roleplaying games. This may mark the first steps of Arduin moving from being a highly-unofficial supplement for Dunother gamesons and becoming its own system, or it might be an odd oversight. Or, and I like this explanation the best, since the Web spell was not in OD&D, but did not appear until Greyhawk, that this represents Hargrave’s own creation, designed pre-Greyhawk to fill an obvious gap, and then published later… I continue to see evidence that the Trilogy books were basically filled almost randomly from Dave’s copious collection of house rules.

Fafin-ghar’s Spell Of The Fiery Flash: An AOE blinding light that, presumably, affects friend and foe alike (no save, but a 5% chance each target was blinking when the spell went off, which means they’re not blind, but the Weeping Angels can move towards them.)

Angborn’s Spell Of The Abysmal Itch: First, let me note I love the naming pattern of the Arduin spells, which takes the occasional ‘flowery’ name from OD&D, like ‘Bigby’s Insulting Gesture’, and turns it up to 11, in full Vancian fashion. Rhialto would be proud. Second, let me present the text of this spell…

Assuming you manage to aim the spell so your allies are not included, this is a ridiculously powerful spell for third level. It will basically clear out a room full of enemies, as “totally incapacitated” usually means “No AC and can’t counter-attack”, and you’ll note something else: No saving throw. Anything up to 20HD is at -4 for 10 minutes… 60 rounds, as Hargrave used the 6-second round. This is far more powerful than simple direct damage spells. In case anyone wants to argue that a save vs. spell is assumed, other spells, like Rorghull’s Rot Spell explicitly say “unless a save vs. magic is made”, so I’m going to interpret this as meaning that the lack of text indicating a save is possible means it isn’t.

I’ll also point out this is a typical example of each spell needing micro-rules, so that the ‘simple’ rules of the main game lead to increasing complexity as everything becomes a special case. There’s always a need for some edge-case rules, lest the game become dull due to too many different effects all having the same mechanical representation (cough advantage/disadvantage cough), but something like “all affected gain the ‘distracted’ condition” can really simplify the interaction between different parts of the game.

And this one is just too cool…

Voor-Hing’s Spell Of The Eater From Within

Otherwise Known As The Spell Of Internal Nom Nom Nom

A good example here of where ‘player skill’ meant ‘memorizing the rules’, so that you’d know you need to cast two spells concurrently to stop the thing. No ‘Knowledge (Arcana)’ checks in the good ol’ days, bucko.. you, the player, had to know all this. Why do you think D&D, et al, was so popular among computer programmers and comic book fans and the like, who prided themselves on their ability to internalize complex systems filled with exceptions and edge cases?

Taslo’s Spell Of The Black Binding: The mage must purposefully slay some other being within his “pentacle of power”. Thereafter, anything that drains life levels from the caster instead drains them from the victim of this spell, whose soul is trapped in the pentacle. Once they’re all gone, of course, the mage is once again vulnerable. No rules on how you create a pentacle of power, of course, or how long the ritual takes, or any other such meaningless trivia. You and your DM, both being perfectly reasonable people, can surely work out an equitable set of rules in a short time with no arguments.

Time Lining: This is a 15th(!) level spell that costs 45 mana + 15 per minute in time forward or 45 per minute backward. Unfortunately, you can’t actually do anything, as attempts to change the past cause you to evicted from the time stream. So if you travel into the future and see everyone dead because they opened the door that unleashed the no-save poison gas, and you return to say “Hey, let’s get way, way, back and send a hireling to open that door”, does that change the past, even though it’s now the present? Short of some very odd edge cases, like jumping back a minute or two to see where someone you were chasing got off to, I don’t see a lot of utility here, compared to other 15th level spells. (OK, there’s not that many other 15th level spells..)

By the way, did I mention that other than being all Mage spells, there’s no order here? They’re not sorted alphabetically, or by level. They’re just there. Spirit of the times, man.

The Crimson Bands Of Cyttorak: Ah, the days when lawyers (damn their oily hides!) didn’t scour every book before publication, looking for actionable items. By the Hoary Hosts of Hoggoth, those were good times! (If you’ve read the comics, you know what this spell does. If you haven’t read the comics, what’s wrong with you? Go read some classic Lee/Ditko Dr. Strange, now!)

Shouldn’t That Be ‘Entries’?

Actually, Mind Focus is a cool concept, though I’d implement it in the modern age a bit differently… 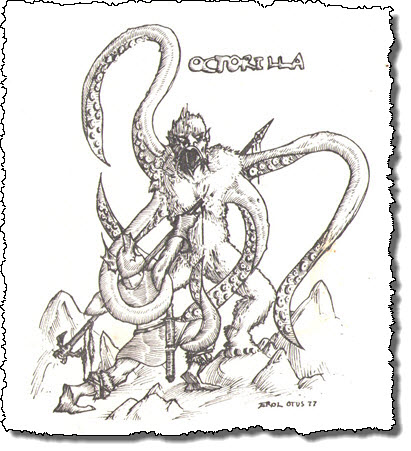 An Octopus/Gorilla. Just What It Says On The Tin

No stats now… that’s coming, I assume, in the monsters section. But it’s one of the tiny handful of Erol Otus bits not published in AG1 and which survived the “revision”. Why his art was purged, Stalin-style, from Arduin Grimoire but not Skull Tower is a mystery for the ages.

So, there we go… the first post-move entry into the Great Arduin Walkthrough. Hopefully, we will be back on a weekly schedule now.