OK, another short one… this time, my excuse is having to remote in to work to make up for time I missed, since I’m a contractor and have to bill by the hour. But I am determined to be regular about my posting… as I age, regularity becomes very important. Ask Wilford Brimley. (“Who?” ask all the kids in the audience.) The encounter tables are pretty much what you’d expect — roll some dice and see what shows up to kill the players. Even so, this being Arduin, there are some hidden gems (1% chance of spotting, guarded by a poison trap with a -4 save, of course). 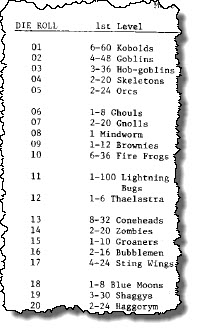 Please note a few things: First, you could easily encounter huge numbers of creatures in a single go. This may have been due to the original “number appearing” in “Monsters & Treasures”, but those figures were based on outdoor encounters in the “hex crawl” mode, where you might stumble on an encampment of 300 orcs. Buried later in “The Underworld & Wilderness Adventure” are rules for determining the number of creatures encountered in a dungeon, and they are utterly incomprehensible. Here, let me show you:

From OD&D, Not Arduin

I sometimes give Dave Hargrave grief for leaving out key elements or data, but nothing in Arduin approaches this level of inscrutability.

So, anyway, that’s why you could run into 36 hobgoblins or 32 coneheads…

Given the date of publication, and the fact they’re not listed in the new monster section, I have to assume they are, in fact, referring to the Saturday Night Live creatures. 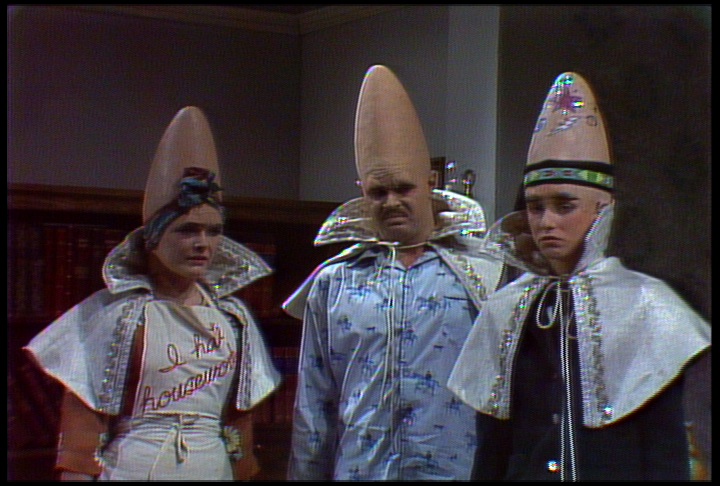 Hey, why not! (The lack of stats in the book is Yet Another Indicator that the Grimoire was literally pieced together from Dave’s personal notes and writings; he may have simply forgotten to remove that entry from the encounter table.)

Anyway, that’s that. We’ll be covering the monsters themselves, soon.

Before that, though — Mists!

Old School Gaming: Even The Air Wanted To Kill You

We now get to the “random fog and mist generation chart”, because of course when you kick down a door in a dungeon, each room might have its own atmosphere… evidently, all those kickable, rotted wooden doors formed airtight seals. Go figure. 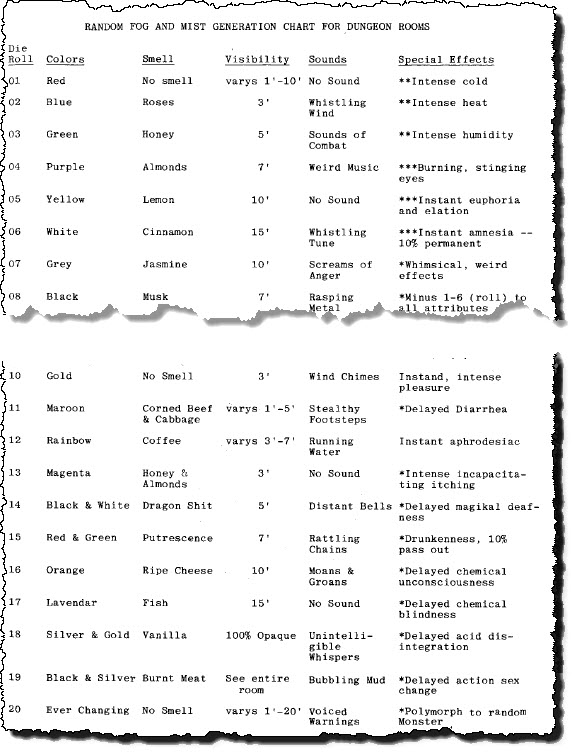 Presumably, you rolled randomly on each column. There’s a footnote stating that this chart allows dungeon rooms to have weird and random effects “without annotating the map”. In short, this chart is there to let the DM screw with the players without the pretense of “wandering monsters”, and without any foreknowledge of what might happen. Just decide a room has a mist, and roll some dice… like this…

20: Ever-changing color
9: Sulfur smell.
4: Visibility, 7 feet, which works perfectly well with absolutely no mapping scale known to humanity. “The orc is in this hex, but you can’t see him.” “Why not?” “Well, the front of the hex is five feet away, but the back is ten feet away, and he’s staying towards the back.”
3: Sounds of combat.
13: Intense Incapacitating Itching. I see Dave, like myself, got regular paychecks from the American Alliteration Association.

But suppose simply flooding the room with random gasses wasn’t enough? (Insert your own “The DM shouldn’t have made chili for game night” joke here.) And suppose you failed to insert a trap in every single map square? Well, that’s OK. There’s a random trap chart, too.

And, alluding to alliteration…

Seriously, That’s What The Section Is Called

Why Would I Lie If Money Isn’t Involved?

So the air hasn’t killed you, nor has the hot oatmeal. What’s left?

Only everyone’s favorite horseman of the apocalypse, plague!

There’s no particular rules for catching these diseases, or curing them. They just do horrible things to you, until they don’t. A few selections:

So, unless you’ve got a cleric with Cure Disease handy, you’re basically screwed.

Next time, monsters. In the meanwhile, here’s a tryvern. 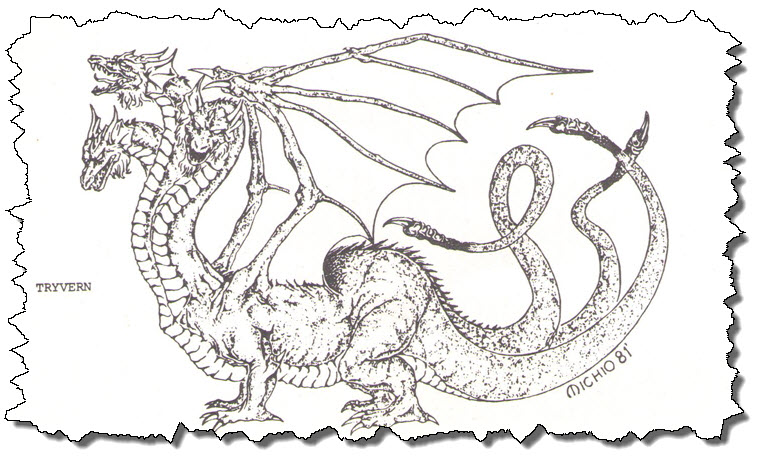