Am I Sufficiently Out Of Ideas It’s Time For A “You Got No Class” Joke?

Aw, Hell No. I Have Two Volumes Still Ahead Of Me, Better Save The Good Stuff For When I Really Need It

Yeah, That’s What  I Consider The Good Stuff. Still Interested In Reading This?

Now You Know Why My Site’s Unofficial Motto Is “Free, And Worth It!”

We’re getting into some of the more outre, which is French for “awesomely rad, dude” (or possibly “we surrender”, I kind of flunked High School French because I spent too much time playing D&D. Seriously.) classes, like Rune Weavers and Technos. Traders and Barbarians? Obvious extensions to the Dungeons & Dragons milieu. (Thank you, EGG, for introducing that word, and many others, such as ‘phylactery’, ‘antipathy’, and ‘antithesis of weal’ to my vocabulary.) Psychics? Less obvious, but given the publication of Eldritch Wizardry and the popularity of Darkover, et al, at the time, clearly part of the zeitgeist. (German for “Toss this word into conversations if you want to sound intellectual and/or see who has the cojones to challenge you on your misuse of it instead of just nodding politely.”)

“Rune weavers were the original human magik users, learning their craft from the reptilian races of eld.”

This is why I love Arduin so much.

Because there’s pretty much nothing else adding more to that statement. Because Dave Hargrave tosses that out like Dream tossing bread crumbs to the pigeons, and then moves on. Because instead of giving us a locked-down, rigorously built, second-by-second timeline of the universe, he gives us a vague, off-hand reference to “the reptilian races of eld” who apparently taught humans magic.. er… magick… er.. magik… and that’s it. We are left inspired, not instructed. We (and by ‘we’, I mean, ‘me’) are free to take this and build on it (or ignore it), to add “reptilian races of eld” to our fantasy worlds, or not. (I usually do; most of my D&D-ish worlds have an era when dragons and their kin ruled the land, as part of my general tendency to have at least three or four long-dead globe-spanning empires as part of the backdrop; it’s the boilerplate code of my worldbuilding.) We are given a tantalizing glimpse of a mystery, not the solution; the shadow of the monster, not the anatomically-detailed action-figure. To understand why this is awesome, consider what you imagined the Clone Wars might have been when Obi-Wan first mentioned them in “Star Wars” (Not “A New Hope”. STAR FRIGGIN’ WARS), vs. actually learning all about them in excruciating detail. (Of course, I’m also the guy who wrote the sourcebook that provided detailed backgrounds for every planet mentioned in Babylon 5 that wasn’t already detailed.)

But we’re supposed to be discussing Rune Weavers here, right? 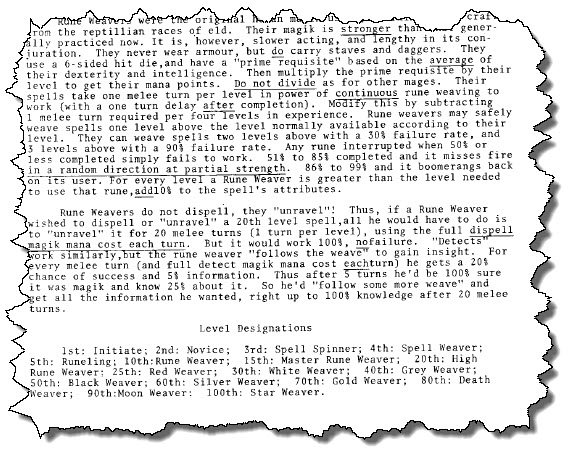 The use of underlines in various places indicates the lack of boldface in pre-DTP days.

Blending technology with fantasy was commonplace early on in D&D, with Dave Arneson’s proto-D&D world of Blackmoor being steeped in it (later introduced officially in D&D proper via the Temple of the Frog in the Blackmoor supplement). Thus, it’s hardly surprising there’s a Techno class in Arduin, though the actual mechanics are… vague. I remember revising them to be, in essence, magic users, but each ‘spell’ was actually a device of some sort that needed to be carefully re-tuned after each use. That this mechanic integrated very poorly with the list of actual abilities granted to the class didn’t bother me at all. 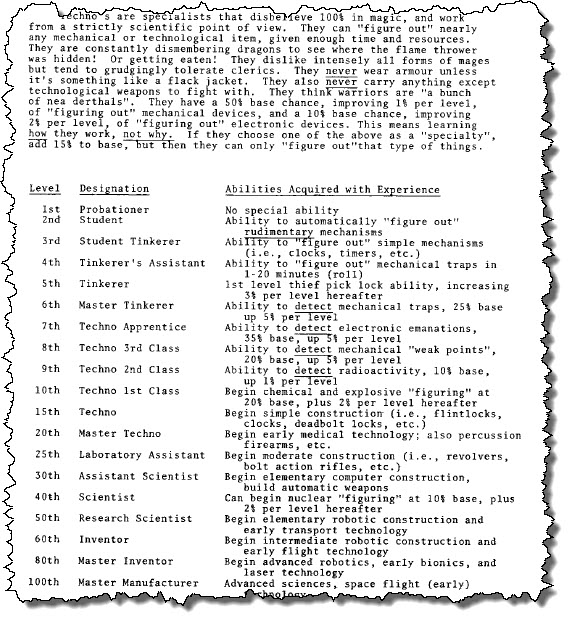 By 15th level, I can make a flintlock. Meanwhile, the magic-user is casting Meteor Swarm.

Techno: “Wait, let me try to detect electronic emanations!” Other players: “What, again?” DM: “There aren’t any… moving on…” Techno: “You didn’t even roll! I’ve got a 40% chance!” DM: “Look, there’s no electronics in the Domain Of The Dread Lich Of Dire Doom. You don’t need to check in every damn room!” Techno (smugly): “Oh, yeah, he’s covering it up. He doesn’t want us finding the secret radio transmitter!” DM: “Oh for…” (Rolls dice). “There. I rolled. You still didn’t find anything. Happy?” Techno (suspiciously): “Yeah, OK. I guess.” Other players: “Finally! OK, we take the door to the north.” DM: “You all die from radiation sickness as you open the lead door to the reactor core!” Techno: “Damn it, if only I had been 10th level!”

(Pedants might point out that a reactor core must be controlled by something that would produce electronic emanations. Thank you, pedants. You killed the joke. It’s dead. Look at its corpse, so sad and pathetic. Are you happy now, joke killer? Are you proud of what you’ve done?

Clearly, politically incorrect in this day and age. It should be Medicine Person. 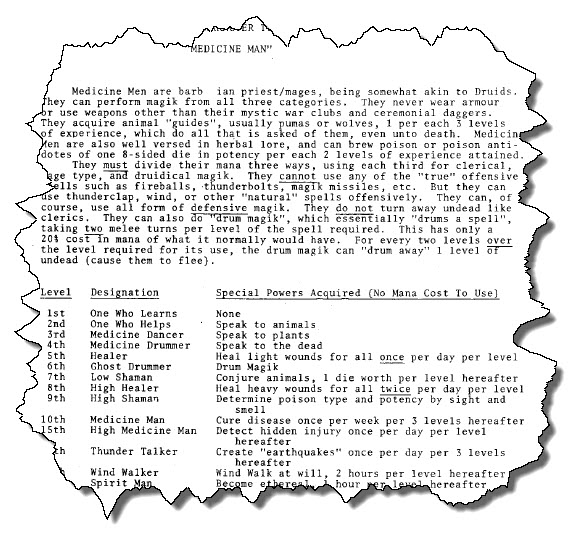 Next time: The Witch Hunter class, and Magic In Arduin.