From The Rare “Bugbears And Bakeries” Supplement, I Guess

I Made That Up

The Supplement, I Mean. The Garlic Bread Golem? Totally Real.

This article is being written because a)My weekly Pathfinder game was cancelled as the GM failed his Fortitude save vs. Generic Winter Disease, and, b)I could get out of going to listen to my mother whine about things by saying I had writing to do, but not by saying I had to keep leveling my WoW character. So, writing.

The prior part of this particular walkthrough is here, and it has links to other parts, and someday I’ll stop being a lazy ass and spend 5-10 minutes organizing this series into a page. Someday. The day may come when I will stop procrastinating, but it is not this day!

Gangbat: Sadly, these do not come subdivided into Cripbats and Bloodbats, or even Jetbats and Sharkbats. It’s just a bat that always attacks in a horde. Sigh.

Ghostshark: Surely, the next big hit from Asylum pictures. Ghostsharks, from Clint Bigglestone, are actually sharks that “swim” on the ethereal plane but which will manifest on the material in order to take a bite out of crime, and by “crime”, I mean, the PCs. There is a small chance of more showing up each time one bites, which could cascade horribly (and by “horribly”, I mean “awesomely”) with a few good (or bad, depending on your perspective) rolls.

Golem, Garlic Bread: What, you thought I was kidding? 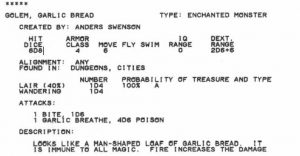 Some variants are burnt, granting +2 to AC, while still others are buttered, causing the area around them to act as a grease spell. Yeah, those two, I made up. But they’d be reasonable extrapolations, no? How about Bear, Gummi? Rabbit, Vorpal, Chocolate? Whale, Fudge?

Anyway, it is “mainly found in pizzerias”. Which are, I suppose, common in dungeons?

Griffopotamus: A hippo with wings. It will not attack unless provoked. Sadly, the writeup does not include rules for having it simply fall on you. Oh well.

Groaner: Small, extra-hairy, unwashed, hobbits. Their piteous whine causes beings of 4 HD or less to feel sorry for them and give them things. They are unfavorably compared to Denebian slime devils. This being a Dave Hargrave creation, I cannot help but imagine there’s some backstory here.

Grond: Another Hargrave creature, this is a bipedal badger-porcupine. It’s interesting how many mid-70s creatures seem like the result of someone going to a furry convention and seeing who hooks up with who, then imagining the resulting offspring. But since “furry fandom” didn’t exist back then, to my knowledge, this explanation is unlikely to be true. 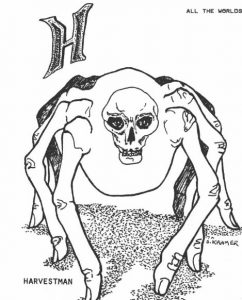 Harvestman: OK, folks, we got some serious nightmare fuel here. It is the result of the mating of a spider demon and his high priestess. It “dispises”(sic) all forms of life other than its own, and spell checkers. In combat, it prefers a “crush” attack which, naturally, has its own unique mechanics, as the idea of universal rules for things like this had not yet materialized. Welcome to the era of “microrules not rulings”!

Hellshrew: A 25lb shrew of “angry, evil, disposition”. As opposed to all those sweet-natured shrews we’re familiar with.

High Hunter: Dude, I am so stoned right now. Is that a deer? We should shoot it… wait… why is is sparkling? Whoa. I can hear it singing to me… OK, sorry. (Not sorry.) This is a “huge air dwelling creature” that is otherwise undescribed as to its looks. It hunts by dropping quills on potential targets. Said quills then inflate the victims with helium, so they float up to where the hunter kills it. Uhm… yeah. I think the hunter isn’t the only thing that was “high” at the time this was created, if you etgay my iftdray.

Ibem: A cubelike creature with one eye, one tongue, and two tentacles on each side. It will not bite until a victim is entangled in the tentacles, but there’s no real way to know what that means. I’m guessing, if both tentacles hit, the target is entangled, and then the ibem bites? Works for me!

Kalidah: A creature with a bear’s body and a lion’s head, from the Oz books, thus demonstrating L. Frank Baum was into kinky furry stuff long before it was mainstream. Well, mainstream-ish.

“My Character Was Killed By A Psionic Tennis Ball” Is A Horrible Story To Tell At Cons.

Lert: If your party befriends one, the chances of being surprised drop considerably. You see, you’re keeping a lert. Think about it. Moving on…

Lotus, Gold/Yellow: This is actually two different plants. The golden lotus is very valuable and can be worth up to 1,000 gp per leaf, as well as being an ingredient for healing potions. The yellow lotus will just paralyze you if you touch it. Only trained botanists, which would never be a PC back in the days before any kind of knowledge skills, can tell the difference. It’s a good example of the kind of traps/gimmicks that abounded in those halcyon days. The solution to the problem is obvious: Send a 1HD NPC to go pick the flowers. If they’re not paralyzed, you keep the leaves and toss him a copper piece for his troubles. If he is, you’ll draw out the inevitable monster lurking around to take advantage of paralyzed PCs.

Lung Dragon: This is not one of the “Chinese dragons” featured in later volumes of the Monster Manual, but a dragon that is almost nothing but lungs. Its only attack is to inhale (make Bill Clinton joke here), which will cause targets to be sucked in based on a formula involving distance from the dragon. It feeds by inhaling metals; any jewels attached to the metal remain undigested.