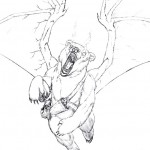 Leave a Reply to Chris McNeil (a.k.a. Gwarh) Cancel reply