Shut Up And Take My Money!

In the first part… we opened a box!

In the second part… we puzzled out dice notation!

But nothing you’ve seen so far could possibly prepare you for the awe… the horror… the majesty… that is.. character creation!

At least, I hope not. I write these things extemporaneously, after all. It might be perfectly straightforward with nothing worth commenting on, praising, or mocking.

(Looks at character sheet. Notes that “Allowance” is misspelled and that there’s a 1-800 number on the sheet to call for orders.)

But the odds are low that will be the case.

On With It, Then

Oh, they used “peek” for “pique”. That’ll cost them on final points.

There Are Many Like It, But This One Is Yours

The GM is encouraged to teach the players the “major area” on the character sheet. The list of “major areas” is 20 items long. Well, I am being a little unfair, because this includes both sides of the character sheet, the powers sheet, and the skills sheet. And, sure, a Pathfinder character sheet can be many, many, pages long if you use Hero Lab and print out all the full descriptions of your spells, feats, class feature, traits, racial abilities, item powers, etc. So let’s move on.

You saw the miniatures in Part I. Here’s the picture. 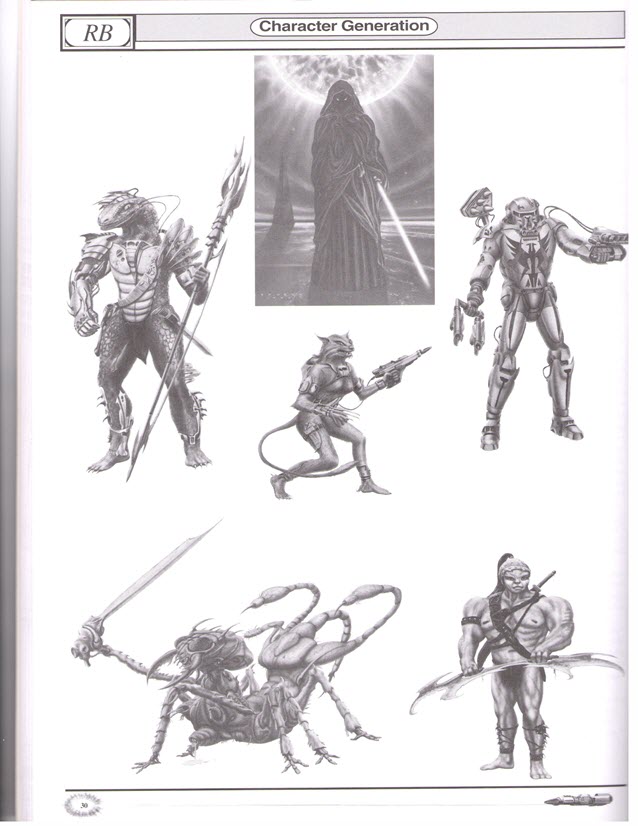 I Have No Idea Now, But Do You Wanna Bet Spider Scorpion Dude Is From The Evil Race?

There’s actually some reasonably sane advice on teaching players to play and encouraging them to make their own choices. The authors seemed to believe, sincerely, this game would be played by groups new to roleplaying. However, there have really only been two games that were the “first RPG” for large numbers of people: D&D and Vampire 1e. While there are of course many individual exceptions, the thousands of other RPGs published have primarily been sold to those who have already been deflowered. (A small slice of the pie might go to licensed games like MSH, Star Wars, and Star Trek, but only a small slice.)

OK, “Generation Steps”. This provides an overview, ending with “Select a team name”, “Make a sketch” and “Start a journal”… yeah, it also says this is in the character book in more detail, so maybe it’s finally time to flip that one open.

Or not… the first section does indeed list all the races and a page of their default starting stats (yes, a page each), but there’s no fluff. That must be in the setting book. Let’s pan over to that…

Lessee, humans are known as Anthropos, they left their homeworld of Url 3000 years ago, something something corporate state, now all the PCs are members of the House of Dha, four “guardian races” (Anthropos, Draca, Zin-Shee, and Calemora… going to guess the Draca are the lizard people. The Calemora are, I think, the stubby wide ones. The Zin-Shee? Probably the cats.)

“Guild”, by the way, means “Galactic Union Of Intelligent Life-Forms and Devices”. (“Someone really wanted the acronym to spell out ‘SHIELD'”). However, it’s never capitalized as an acronym in the rules. Go figure.

More history. And some notes that the Guild will gain two new allies, the Kryll (spider people — so I was wrong, they are not the inevitable bad guy race. Critical success on Save vs. Cliche there! I am impressed!) and the Shanask (the dude with the lightsaber). But this occurs after the first adventure. Spoiler!

But there’s not too much need for me to read further. This game has cat people! I can play a catgirl! Whee! (And it’s very much a catgirl, as the cat people actually have two racial entries, one for males, one for females, which is pretty typical for lion-like races in SF games — see Traveller’s Aslan, or, hell, CJ Cherryh’s Chanurr series. Hey, if you have high sexual dimorphism in a species, flaunt it!)

The other races seem perfectly formed from Central Casting: Humans are adaptable, Calemora a Proud Warrior Race (sort of Kung Fu Vulcans… emotionally controlled, ascetic, and dedicated to physical perfection and martial arts), Draca are militaristic cyborg lizard-men, Zin-Shee are a feline race with all the usual cat-people traits… they sleep in bursts, they are easily bored, they’re agile and have keen senses, they dress like fops (some of the time)… wait, seriously?

You can play a cat-girl swashbuckler with a scimitar and an energy pistol of some kind (at least, I think that’s what she’s holding on her hip)? And this isn’t plastered in large, friendly letters on the cover? “Contains Swashbuckling Cat Girls!”? Wow, talk about burying the lead! No wonder this game didn’t make it, if you had to read through umpteen pages of weird dice rules and setting nonsense and pretentious introductory crap before you got to the swashbuckling cat girls! Sheesh!

Well, I know what I’m playing!

OK, so we go back to the racial trait page in the character book and… hoo, boy. That’s a… lot of numbers to copy over. I do not mind complex games; I love complex games; but there’s a reason I spent $$$ on HeroLab supplements. I expect the computer to do the work. That’s what they’re for. To serve as the tireless digital slaves of mankind, until such time as they rise up and kill us all. But I digress.

Oh, the “handicaps” section for the Zin-Shee lists “flirtatious”. Giggity.

Every attribute has a base value (Dexterity 8M for cat girls… I mean, Zin-Shee Females), and an IC, which turns out to mean “Improvement Cost”, which you pay for, I think, in AP (Adventure Points), which you get 100 of which to start. I think. And I’m kind of glad I spent the time to figure out the die system, or I’d have no idea what it means when my weight is listed as “6LV+100 lbs”. And you understand, don’t you, because you read the prior article in this series, right?

Uhm, improving abilities costs as much as the Value of the dice code, plus the improvement cost. To raise my Dexterity thus would require 16 (the value of 8M) plus 20 (the IC cost for that ability for my race), or 36 points, which would bring to 10M. Presumably, though it’s not clear, I could raise it next level (you can only raise an ability 1 die at a time) to 6H by spending 40 more points. It’s even less clear if you can spend points to raise your abilities out of the “Personal” scale… it would sure be expensive.. or maybe not, the Shanask already have 10HP endurance… one more step and it’s 6LV. You knew that, right?)

Oh, There You Go, Bringing Class Into It Again

What, you say? Surely a game published in the 90s wouldn’t be using a primitive race/class system! (Remember, you’re talking to someone who literally has a three foot tall stack of Pathfinder books, so tread carefully, imaginary strawman!) Well, of course not! It has a race/Chapter Of Dah system!

There are various “Chapters” in the House of Dah, such as Bio Gunner (which Zin-Shee cannot become… because of course in addition to race/ chapter, there are also 1970s style limits), Destron, Mensi, Warlocks, and more. (Warlocks, by the way, are masters of the Sorce – yes, that’s how it’s spelled, formatted, and capitalized, and are illustrated by a guy in dark hooded robes holding up his hands while lightning crackles around him. I wonder how often that 1-800 number was called by Lucasfilms’ attorneys?)

I think I’ll go for cyber-warrior. Most of the “chapters” are some variant on “guy wot hits things”… I’d figure that a mostly point-based/skill based system would not need a different class for “guy wot wears power armor and hits things”, “guy wot has lots of cyborg bitz and hits things”, and “guy wot hits things with gun wot shoots out bore-worms wot eats yer face nom nom nom”, leaving that up to a player’s picks for skills/gear, but what do I know? I never founded a game company that included a scholarship program, after all.

Oh, did I mention there are level titles… I mean, rank names? OLD SCHOOL!!!

For the exciting conclusion. I’d say “Next Week”, but I get one day a week (Saturday) to really dedicate to writing these things, and next Saturday is our birthday, precioussss, and our PayPal is lizard@mrlizard.com. Just mentioning. So I’ll be off doing birthday things and might not (probably won’t) have time to work on the next installment. Also, I need to actually fill out the Excel-like character sheet, do the work, and scan the results. This isn’t something I can easily track otherwise.