There’s darkness. And then there’s something else, something that is to ordinary darkness as darkness is to light. This darkness is not merely the lack of light, but a force unto itself, light-devouring. It can be found in many parts of the Abyss, but rarely is it as dominant as it is in the Midnight Depths.

Mortal scholars call the lowest parts of the sea the Abyssal Zone, and in some worlds this is done without knowledge of how accurate that term is. The crushing pressure, the life-draining cold, the utter darkness, and the nightmare things of claw and tooth that dwell in those bleak expanses all combine to form a sort of psychic symmetry with the swirling maw of nightmares that is the Abyss, and where there is symmetry, there is connection. It is quite possible that those few explorers brave and foolish enough to enter the abyssal zone of the seas of a mortal world may find themselves in a somewhat different kind of Abyss.

The Midnight Depths is a layer of the Abyss where there is an ocean without surface, and not merely without light, but actively, brutally, hostile to light. It is a place of crushing water and crushing despair, a maze of blade-edged canyon walls and sudden, unavoidable, currents, inhabited by strange and twisted creatures, all dwelling forever in a blackness that cannot be easily described, just experienced.

The geography of this plane defies easy explanation. Chaos rules here, as it does throughout the Abyss, and attempting to apply mortal concept of order and purpose, of cause and effect, is a game for fools. The nature of the Midnight Depths is that it is a place of deep chasms carved into bleak stone, and this cannot be escaped — swim up, straight up, from any chasm, and you will quickly find yourself swimming inside the close walls of another one; reverse and swim down, and you will find the walls closing in to form the bottom, a bottom you did not pass through on your way "up". Continue upwards, and the process repeats.There is no teleportation, no gates, no mechanism that any mind can understand or manipulate, there is simply this fact: If you travel in the Midnight Depths, you will either by traveling inside a narrow, twisting, canyon at the bottom of a vast and immeasurable sea, or you will be swimming just above the labyrinthine floor of that sea. There is no place truly open and unbounded, and absolutely no surface.

And even more absolutely, no light.

The Midnight Depths permit no illumination, at least none of normal sort. A sunrod, for example, casts no light, though activating it will consume its power normally. Spells which one might expect to cast light, such as those which do radiant or fire damage likewise produce no visible effect. Creature with darkvision or low-light vision are blind, for such abilities are based on dealing with normal darkness, not the true, deeper, darkness of the Midnight Depths. Only blindsight works here, as well as non-visual means of perceiving the world, such as tremorsense, sonar, or psychic perceptions.

Furthermore, it is cold. While the Midnight Depths are filled with water, and one might expect that this sets a lower bound on the temperature, again, the physics of the Abyss are not those of the mortal worlds. Depending on where one is, the water temperature ranges from barely below the nominal freezing point to far, far, below it. Depending on the DM’s whims in this regard, this can call into play either the normal rules for surviving extreme weather (and it is extreme!), a skill challenge, or simply exposure to a constant cold attack.

(All of this presumes the party has some means of breathing water, of course. The DM should have a great deal of fun describing the sensation of those first submerged "breaths", the feeling of water of almost unimaginable cold pouring down one’s throat and into one’s lungs, instantly freezing the warmer liquids that suffuse the body, the sensation of an explosion of ice crystals throughout one’s flesh as one freezes from the inside out… and that, of course, is merely the start of the fun to be had in this layer. Indeed, one could argue that without some level of Resist (Cold) (even a single point’s worth will do), you take ongoing 5 damage at the start of each round, unless you don’t breathe… in which case, see the rules for drowning.)

The Midnight Depths are quite well populated, something which becomes evident as soon as there is a means to perceive the surroundings. Things of tooth and stinger flash through the black seas, tearing at each other and at anything else which might enter their perceptions. The cracked and rocky ocean floor heaves and surges with life, or at least with creatures, a seemingly infinite army of beasts with shells, and pincers, and sucking maws full of teeth and tentacles ending with snapping beaks and strange, armored, protrusions reaching farther than seems possible. The canyon walls are sometimes coated ten feet deep in ever-warring swarms of sea creatures. Blobbish entities drift above the floor, some miles across, containing within them hundreds of slowly dissolving victims. Creatures from other parts of the Abyss, such as the Howling Reef or the Salt Sargasso can be found here, often changed to fit into the environment. And then there is Eassussu, the Island Of The Depths.

Eassussu is one of many Abyssal sea-lords; the fear and dread of things that dwell in the depths is strong throughout countless mortal worlds, and whether this is due to the presence of so many deep sea demons or if the demons are the result of this belief is both indeterminate and irrelevant. He is a slow, ponderous, creature, eternally swimming in the frozen darkness, and his followers are few and scattered, represented by tiny cults practicing their rites in the most obscure places. In form, he is an immense, flattened, thing, with a wide mouth and great trailing fan-like flippers, his face lined with dozens of eyes, his skin coated with a slimy mucous. He is called the Island of The Depths due to his immensity; hundreds of feet in size, his body is often covered with parasitic demons. His thoughts are as slow and ponderous as the rest of him, and his primary urge is to consume and to destroy. He is dimply aware of his few worshippers, and grants them power almost subconsicously. Should they summon one of his avatars, it will destroy as much as it can in whatever world it appears in; if it is not stopped, it will eventually become a resident of that world’s oceans and become a monster of local legend.

Eassussu cannot be directly confronted in the Midnight Depths; he is more of a locale than a being. DMs interested in using him should contrive some means of destroying him, such as driving a spike of pure radiant energy into his mind; doing so will involve some sort of complex quest and battle with his exarchs, many of whom dwell on or within his body and will emerge from it to defend their lord (and home).

As noted, there are links between the Midnight Depths and the deep oceans of the mortal worlds. Undersea races which dwell in the darkest parts of the sea may find themselves confronted by a sudden invasion of demonic crabmen or the like, and this may drive them to other territories, which can in turn incite war and other conflicts, unless the demonic invasion can be turned back. Likewise, it is more than possible that a ship carrying a rare treasure, such as an artifact needed to perform some quest, sank into the darkness of a mortal sea but ended up in a rift in the Midnight Depths, where it has become the "castle" of some sort of self-proclaimed local petty demon lordling. Lastly, of course, some cult may seek to bring an avatar of Eassussu into the world, and they must be stopped, you know the drill. The harsh nature of the Midnight Depths makes adventuring there more than just hopping into a portal and hoping for the best; players must actually take steps and be prepared, which can involve some sub-quests or skill challenges.

Going to try something new here… a pretty graphic image of a monster, and some easily-copied plain text.

The Clacking Ripper is a fairly typical inhabitant of the Midnight Depths; it is something like a crab, but malformed and unbalanced, its entire body surface covered with thousands of writhing ciliae. It exists mostly to tear apart anything it can reach. Its shell resembles the drippings of a candle, if a candle were made of iron, but despite its thickness, it is strangely vulnerable to heavy blows. 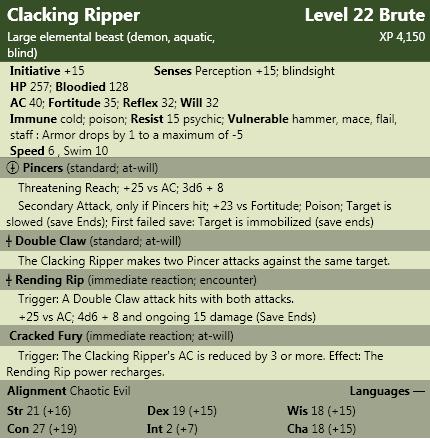