↓
Home→Abyss Project→017 The Maze Of Fangs

The Maze Of Fangs

The Maze of Fangs is the very heart of the Darkbriar, a twisting labyrinth of thorns, leading to the Enshrouded Towers at the heart. Here is where Zagralath dwells, and if he ever leaves his home – or even if he can – is something of a mystery. He has never been known to visit other planes in person, though he will sometimes send servants on such errands. He has sealed his domain as tightly as he can, with no direct routes other than those portals he personally opens and closes. The only other way in is via the Overgrowth, an often difficult journey. Even those passages end far, far, from the Enshrouded Towers, leaving visitors to wend their way through the myriad passages, tunnels, and dead-ends of the Maze.

Read on for the venom-dripping details!

The Maze of Fangs

One might expect this name to be applied to some layer rich in spiders or serpents, but as with the other layers of the Darkbriar, the dominant feature of this plane is plants — plants whose thorns excrete every toxin known. Everything in the Maze, right up to the gates of the Enshrouded Towers, is coated with virulent and ever-renewing poison. There are toxins of sleep and of agony, of instant death and eternal mindlessness, venoms which can make a man wish to tear out his eyes and seeping oils which numb a man to all pain… and all pleasure. The Maze is a brilliantly colored place, as well, with tens of thousands of species of unnamable flowers, blossoming constantly, in every hue and shade… but all of them are wrong. Too bright, too rich, too deep, the initial feeling of unexpected beauty quickly fades as the visual cacophany continues to smash against the senses. The patterns of the flowers seem to speak of strange obscenities and twisting images, the colors blend and clash in ways that lead first to fascination, then to madness, and the shapes of the petals quickly reveal themselves as grim and morbid mockeries.

The nature of the Maze is such that knowing its full extents is impossible. It cannot be flown over; any attempt to leave the ground results in a lashing assault; see below.

The Maze is constantly patrolled and "pruned". Zagraleth was originally a gardener, and he has a constant flow of new ideas and things he wishes done, now that he is commander of his own domain. He is, of course, a notoriously chaotic taskmaster, and it is very difficult to tell what will please him and what will not, as his moods change constantly and even total obedience to his commands will not negate his wrath, if he has changed his mind in the intervening time.

In addition to those who roam the maze freely, there are those set to running in it. Zagraleth will sometimes promise rewards — freedom, treasure, a position of authority in his realm — to those who can complete some task, such as reaching a particular point in the maze or finding one specific flower within a short period of time. Naturally, the games are always rigged, but, sometimes, someone will "win" — and Zagraleth may honor his promise, or he may decide the person is a threat and kill them out of hand. Demons. What can you do?

The extraordinary profusion of life in the Maze of Fangs is what draws visitors to it — the most exotic poisons can be found here, things which do not exist anywhere else in the known universe. It is said that somewhere in the maze there are venoms which can kill a god.

The Enshrouded Towers is the name given to Zagraleth’s home. Once an Eladrin castle-fortress, it was brought whole into this realm during the events which empowered the newborn demonprince. Much like the Overgrowth, it is completely covered with thorns, but within it is the only non-pointy part of the entire Darkbriar. Here Zagraleth dwells, observing events throughout his domain, meeting with his servants, and conducting his business. He enjoys pain, of course, and so much of the place is given over to his experiments in torture, using incarnate souls from the Darkbriar if he must, but mortal visitors and trapped invaders when he can get them. He also fancies himself something of a botanist, and so, there are gardens here, lit by magics, where he experiments with various types of plants, especially those which are both animated and spiky. There are more mundane areas as well — meeting rooms, a dining hall, and a throne room. The Throne of Thorns is an interesting thing; made of wood, it appears to be merely a large and ornate seat until anyone — including Zagraleth — sits upon it. Then it grows an amazing profusion of spikes, pinioning the inhabitant. Zagraleth knows the words to release the trap; no other does. The throne grants several powers, including knowledge of the entirety of the Darkbriar and the ability to project ones will to any point there — this can shift mazes, release the imprisoned, open portals directly to the Towers. Those other than Zagraleth who somehow reach the throne and seek to use it will need to endure almost unimaginable agony to do. (Zagraleth feels the pain, but takes no true damage; it’s part of the nature of the plane and his relationship to it.)

Immediate Reaction; Trigger: use of Flight, Burrow, or Climb speeds.

Special: There are no limits to how many times the Maze may use this reaction in a round.

The Throne Of Thorns

The exact powers of the Throne are more-or-less pure plot device; if the players need to free a prisoner in the Overgrowth, or open a portal to let in an army of angels, or do anything else in the Darkbriar, they will need to secure the Throne. Sitting on the Throne triggers the following:

Immediate Reaction; Trigger: Anyone sits on the Throne.

Secondary Attack: 37 vs. Will; lose a healing surge.

The throne will then make this attack again on its initiative. (It has an initiative bonus of +20)

It is not possible for someone sitting on the Throne to remove himself, unless he has somehow learned the word of command. (This cannot be learned merely by listening to Zagraleth, as the word is at least partially mental — you must not only speak it, you must think a different phrase as you do so.) Removing someone from the Throne involves a Grapple check against the Throne’s Fortitude Defense of 42. The Throne cannot be damaged by any means.

Anyone pulled from the Throne will take ongoing 15 damage (save at -2 ends).

Zagraleth will be seemingly impaled when he sits on the Throne; however, he takes no real damage and can release himself as a minor action. 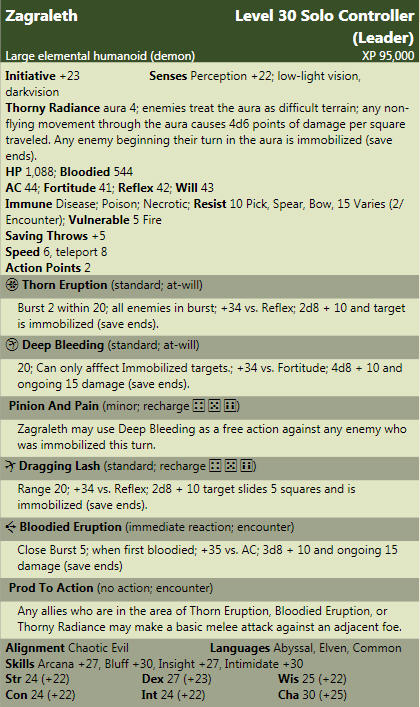