It cannot truly be called a "maze", for a maze implies a mere two dimensions. Like the rest of Darkbriar, Icethorn extends in every direction, plants with no roots and no surface, a sprawling labyrinth of needles to impale the weak and unworthy, fed by blood and pain. It is a realm of twisted, thorn-encrusted vines, one wrapped in bitter cold, with the substance of the layer moving from frost-encrusted plant to living ice and back again in a manner that follows no rules or patterns.

Icethorn is cold, and the cold cannot be described as the mere lack of heat. It is heat-stealing, a cold that extinguishes all life, all warmth — the warmth of love, the warmth of compassion, the warmth of humor. The direst reaches of the Shadowfell are a merry carnival compared to Icethorn. To be here is to be drained of all that gives life meaning.

The exact bounds of Icethorn are unknown; it is difficult to say where the maze turns back on itself, and where it blends into the other layers of Darkbriar. At a very rough guess, it fills a distorted sphere some 500 miles across. Some particularly daring or perverse sages have charted a few regions within the plane, areas that seem to distinguish themselves slightly. These are:

Icethorn is patrolled by Alalasciane’s hunters. These strange creatures, hybrids of fey and demon, roam the maze, accompanied by their "hounds". They will do all they can to keep enemies pinned down, sniping from range, while the hounds close in for the kill. At times, other demons, or special guests of Alalasciane, will join in the sport. 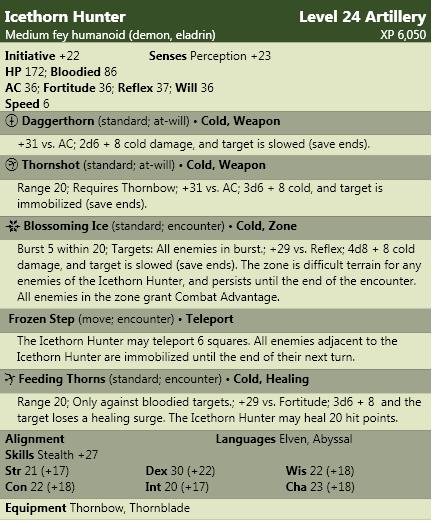 The hounds are those Eladrin souls plucked from the gallery who failed to please Alalasciane. Naked and chained, they are forced to run along on all fours, baying and howling. If they speak or otherwise act against their role, their punishment is a return to the hedge, and even this degradation is preferable to that. Their teeth have been removed and replaced with thorns driven into their gums; when they bite, the pain to the victims is usually intense enough to force them to be driven wherever the hounds wish them to go. 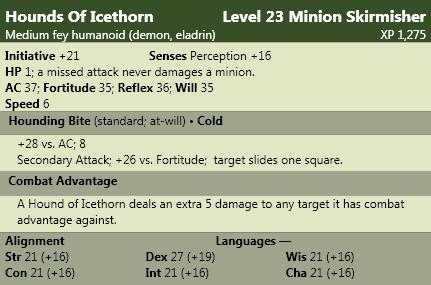 Any power with the "Fire" keyword of less than 21st level has its ranged halved.

Saves against ongoing effects with the "Fire" keyword receive a +2 bonus.

Anyone who is the target of a power with the Healing keyword must make a DC 20 Wisdom check; if they fail, they receive only half the hit points they are due.

A DC 25 Endurance check must be made for each hour of travel in Icethorn. Failure causes the loss of a healing surge; failure after there are no more healing surges causes a loss of hit points equal to the character’s level. An Extended Rest in the open restores only half the usual number of surges, unless special precautions are taken. (Rituals, a DC 28 Nature or Religion check, and so on. The DM should be open to reasonable suggestions.)

(Within one of the portals in the Bitter Rains, none of the above apply.)